The House of Refuge 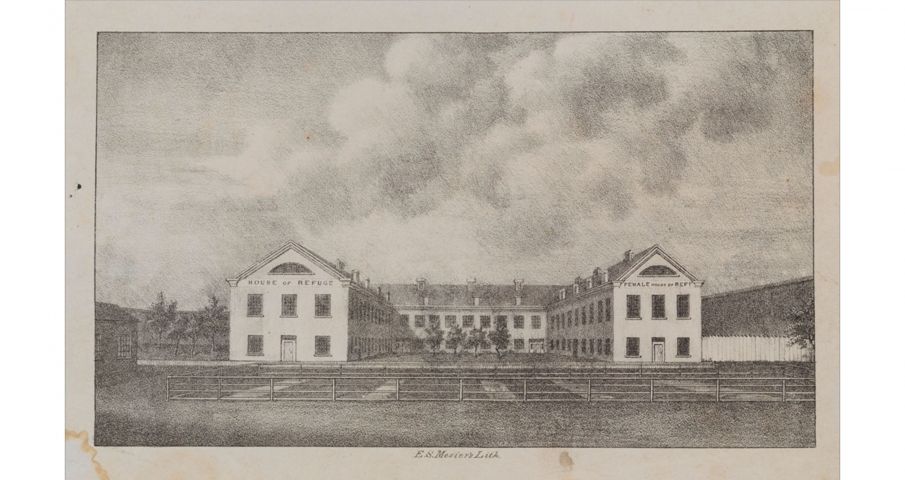 It stood just north of where the Flatiron Building is now, a formidable-looking structure of stone and brick that was built in the early years of the 19th century to house and train soldiers during the War of 1812. Within a short time, however, it would make history as the House of Refuge – this country’s first reformatory for juvenile delinquents and the model for others in large cities.

The House of Refuge was the brainchild of a newly formed civic organization called the Society for the Prevention of Pauperism and Crime, which felt that incarcerating youngsters with “older and more hardened criminals” did nothing to improve their prospects of rehabilitation. The children deserved their own quarters, and the armory, no longer needed for war, became the New-York House of Refuge. On Jan. 1, 1825, the new reformatory welcomed its first inmates, six boys and three girls. As the delinquent population grew, separate wings for boys and girls were added and the original rectangular building became U-shaped. In 1839, a fire destroyed almost all of it and the House of Refuge was relocated to 23rd Street and the East River. In 1852 it was moved once again, this time to Randall’s Island, with plans to house up to 1,300 juvenile offenders.

In a 3,400-word article published on Jan. 23, 1860, The New York Times extolled the virtues of the House of Refuge, citing its commitment to education, its vocational opportunities, even its cuisine, and describing its administrators as “having been, from the first, among our most judicious and philanthropic citizens.” Other Houses of Refuge sprang up in Boston, Philadelphia and elsewhere.

But the true picture wasn’t as cheerful as all that. It wasn’t long before investigations uncovered an enormous amount of abuse inside the walls of the reformatories: excessive corporal punishment, exploitation of the inmates as sources of cheap labor for outside contractors, virtually no classroom education or vocational instruction to prepare the children for a better life. The Houses of Refuge eventually disappeared, relics of a bygone time, their passing mourned by few.

Image via Museum of the City of New York