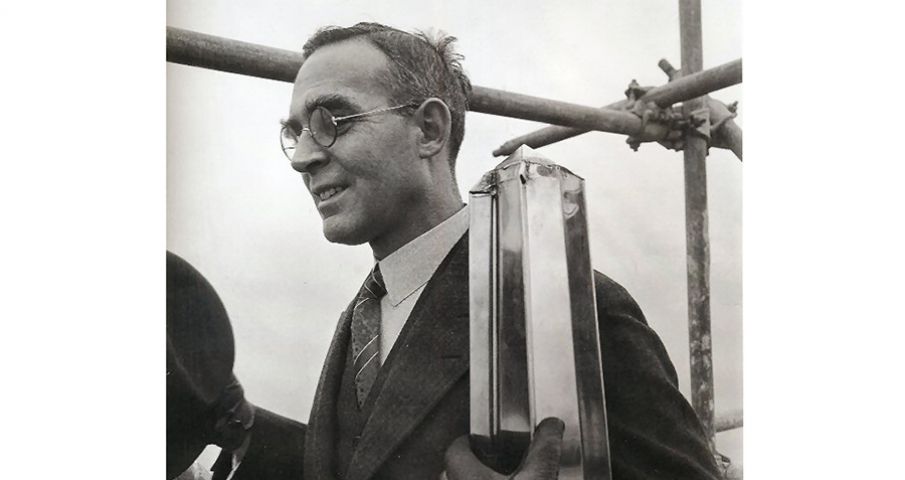 While William Van Alen is best known as the architect behind Midtown Manhattan’s iconic Chrysler Building, it was the Flatiron District where the innovative designer launched the blueprint for one of his earliest creations – the Albemarle office building at Broadway and 24th Street.

Van Alen was born in Williamsburg, Brooklyn, in 1882. The aspiring architect attended public school and studied at Pratt Institute. At the age of 16, Van Alen landed his first job as an office boy with row house developer Clarence True, and later worked as a draftsman at the Hotel Astor in Times Square.

For the next few years, Van Alen would design Classical Revival style tenements in Brooklyn while also studying his craft. He was awarded the Paris Prize in Architecture in 1908 by the Society of Beaux Arts Architects and decided to attend the École des Beaux Arts in Paris. In a 1930 edition of The American Architect, critic Kenneth Murchison characterized the upcoming Van Alen’s thoughts as “No old stuff for me! Me, I’m new! Avanti!”

Upon his return to New York City, Van Alen opened his Flatiron practice in the Metropolitan Life Tower in 1911. Three years later, he formed a partnership with another young designer, H. Craig Severance; however, the independent-minded Van Alen reportedly kept his distance with most colleagues. “I am not particularly interested in what my fellow men are doing,” he once said. “I wish to do things original and not be misled by a lot of things that are being done by somebody else.”

Van Alen’s design for the Albemarle office building was built in 1915, where the 16-story property occupied the former site of two prominent hotels, the Hoffman House, and its neighboring annex, the Albemarle. In the mid-19th century, Flatiron had been known as a high-profile hotel hub that welcomed a diverse clientele who included actress Sarah Bernhardt, showman William F. “Buffalo Bill” Cody, and newspaper mogul William Randolph Hearst. But as the city entered the 20th century, most hotels were exiting the area to move uptown, and the area increasingly became a gateway for offices and showrooms, especially for toy marketers. Then dubbed “Toy Building North,” the Albemarle is now known as 10 Madison Square West and is undergoing a transformation into luxury residential condominiums.

By 1924, Van Alen ended his 10-year partnership with Severance due to conflicts and found work as a designer of storefronts, restaurants, and prefabricated housing. But it would be a commission from auto icon Walter Chrysler in 1928 to construct a tall building that led to the architect’s greatest achievement during the commercial real estate boom of the Roaring Twenties.

Described by a colleague as “the Ziegfeld of his profession,” Van Alen’s Art Deco Chrysler Building made its public debut in 1930. The property was then known as the world’s tallest building before the arrival of the Empire State Building on New York City’s skyline one year later. Initially, the Chrysler site made Van Alen’s name a sought-after brand, but the lucrative demand was short-lived because of the decline in skyscraper development and the economic toll of the Great Depression.

Van Alen died in 1954, and following the 1970 death of his wife Elizabeth, whom he married in 1916, half of the architect’s estate was bequeathed to the National Institute of Architectural Education (NIAE), formerly known as the Society of Beaux Arts Architects.  In 1995, the NIAE was renamed the Van Alen Institute to honor its benefactor.

These days, the Van Alen Institute is a nonprofit design collaborator of public programs and competitions and is located at 30 West 22nd Street in the Flatiron District. In December of 2014, a new street-level floor space was unveiled. The Institute’s mission is “to explore projects that improve people’s lives,” says Executive Director David van der Leer. “Today, we work in three clear strands to initiate, promote, and evaluate design ranging from cities to landscapes and regions. It’s important to show all of the cool things design can do!”