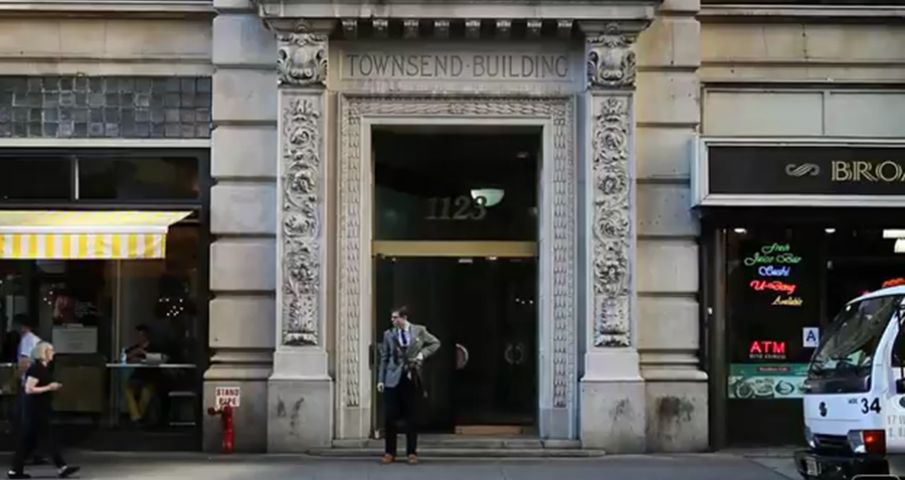 It’s one of Flatiron’s finest architectural fixtures inspired by one of New York’s favorite sons of design. Cyrus Lazelle Warner Eidlitz, who grew up on Manhattan’s Upper West Side, would later emerge in Flatiron as a true talent in the district by creating one of its greatest properties, the Townsend building.

“For three generations, my family has preserved and protected this beautiful asset,” says Leslie Spira Lopez, President and CEO of Kew Management, the firm that now owns and operates the 12-story property that also features a penthouse at 1123 Broadway and the corner of 25th Street. “It’s exciting to see the building over again each time a prospect comes in and gasps at the decorative moldings or the marble hallway floors. Almost everyone I show the building to says, ‘Wow’ when they see the central hallway running the full height of the building!”

Even in 1896, industry insiders were impressed with Eidlitz’s classic revival rendering of the property with its elaborate steel frame and limestone façade, concluded Architectural Record writer Montgomery Schuyler in his abstract about the architect’s labor of love. “This sketch exhibits plainly enough that its author has an intelligent appreciation…that the skyscraper must have a powerful base, a plain shaft and a rich crown.”

The site became a jewel in the eyes of numerous architects who sought space in the Townsend, including Eidlitz, whose notable résumé featured such designs as the Metropolitan Telephone Building on Cortlandt Street and the old Times Tower at 42nd Street and Broadway.

It was also the easy access and centrality of the Flatiron and Madison Square areas that brought about the gradual influx of building trade businesses from other sections of the city at the turn of the 20th century, thus producing a sizable number of hotel and residential building conversions to high-rise commercial properties to accommodate the work style of these companies in the district.

Constructed between 1896-1897, the Townsend Building replaced the Worth House, a mid-19th century brick hotel, located on land owned by the estate of Isaac Townsend, the founder of a Randall’s Island boys’ institution, according to the Madison Square North Historic District Designation Report issued in 2001. The publication also noted that Townsend’s son, who also shared the same name, was an heir to the property, in addition to being a part owner of  The New York Herald newspaper and a founder of the New York Athletic Club as well as the Racquet and Tennis Club of New York.

In the following decades, reported The New York Times, a vast variety of the building’s occupants would include the Woman’s Hotel Company, a philanthropic organization, the Mason Builders’ Association, which conducted meetings at the site, and the committee offices of the Westminster Kennel Club, the awarder of prizes to dogs ranging from beagles to fox terriers for their shows held at the then nearby Madison Square Garden on Madison Avenue between 26th and 27th Streets.

But unlike many others, the Townsend Building has remained at the site where it originated more than a century ago. It thrives today as one of the leading successes in the Flatiron commercial leasing community, an area with an availability of 22.3 million square feet in 205 buildings, with an overall vacancy rate of 4.19%, according to the BID’s 2012 report Flatiron: Where Then Meets Now.

“While the building was originally conceived for the building trades, the tenancy is, as is it has been for most of its 115 years, primarily creative firms, including graphic, clothing, systems designers, branding firms, advertising agencies and architects,” explains Spira Lopez about the property’s present-day entrepreneurial environment that also includes the ground-level location of Hill Country Chicken, which celebrated its two-year anniversary at this site in September.

Adds Spira Lopez about the building’s modern-day makeup, “Kew Management is currently studying a refurbishment of the retail level to restore the lofty glass expanses that characterized the original design. The exterior of the building is beautifully designed and I love the restraint that Eidlitz exercised — it’s classic!”