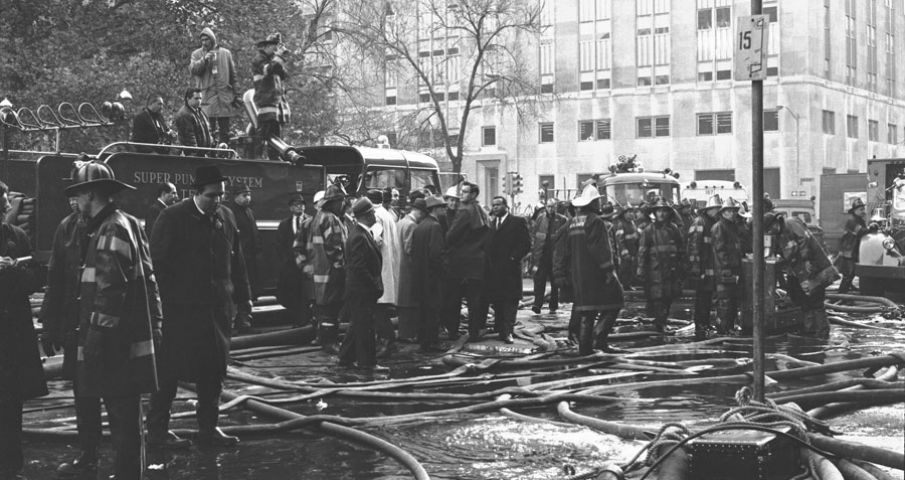 Herb Brown, an artist who lived and worked in a fourth-floor apartment at 7 East 22nd Street, thought he smelled “something strange.” When he checked it out and saw smoke coming from the roof of an adjoining building, he told his wife to call the Fire Department, rounded up his four children and led his family to safety. By that time, the electricity had already failed and the Browns had to grope their way to the street with the aid of a flashlight.

It was a little after 9:30 p.m. on the night of Monday, Oct. 17, 1966. What followed was one of the most horrific fires in New York City history. It took the lives of 12 firemen, the largest departmental death toll in one event in what was then the 101-year-old history of the NYFD, a toll not exceeded until Sept. 11, 2001, when 343 firefighters perished at the World Trade Center.

The blaze leveled the entire block of Broadway between 22nd and 23rd Streets. One of the buildings that rose on that site, the Madison Green high-rise, has a bronze plaque affixed to it recalling the event and on Saturday, Oct. 17, as it has in previous years on the anniversary of the fire, a commemoration ceremony will be held there.

The source of the fire was in 7 East 22nd Street, the four-story brownstone where the Brown family lived and where an art dealer stored highly flammable supplies in the cellar, according to Fire Department documents. A lamp and lampshade business was on the ground floor and many artists’ lofts and studios occupied that building as well as adjoining ones. The rear wall of the 22nd Street brownstone abutted a five-story brick building to the north at 6 East 23rd Street, a building that housed a street-level store called Wonder Drug, a site that turned into a death trap.

When firemen arrived on the scene that Monday night, the smoke and flames were too intense at 7 East 22nd to allow entry. Crews went around the corner to 23rd Street and went in through Wonder Drug, where there was much less smoke and fire. They didn’t know that the drug store shared a cellar with the 22nd Street building or that a wall in the cellar had been moved to give the art dealer more room. Those flammable lacquers and paint supplies in the basement were now directly beneath the drug store’s five-inch-thick terrazzo flooring.

As firefighters headed for the rear of Wonder Drug, they were jolted by a tremendous roar. A 100-square-foot section of the floor had collapsed, plunging 10 men into the inferno below. Two more were killed by the blast of flame and heat that engulfed the ground floor. All told, they left 12 widows and 32 children.

It wasn’t until 2 p.m. the following afternoon that the last body was recovered. By then, 300 firemen were at the scene and they all filed softly into Madison Square Park for a silent prayer.