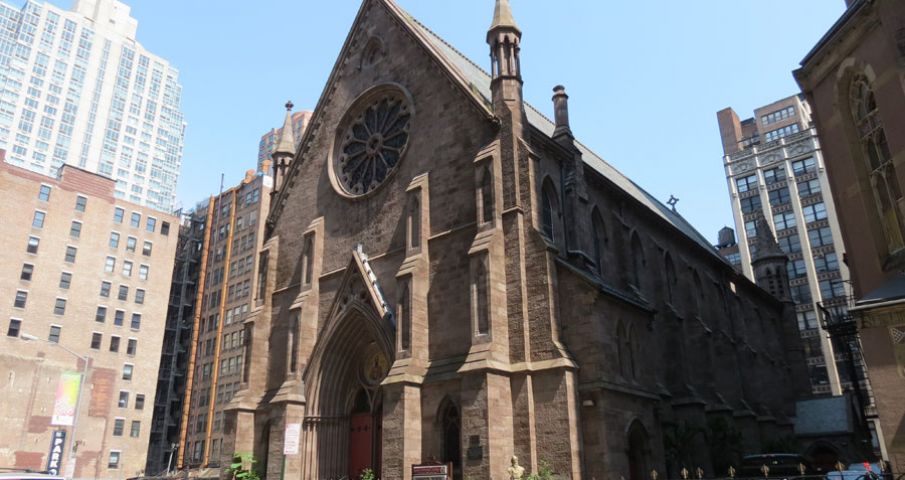 The Serbian Orthodox Cathedral of Saint Sava — a remarkable mid-block complex of neo-Gothic brownstone buildings in the Flatiron district — can trace its beginnings to the original parishioners of Trinity Church, down on Broadway and Wall Street.

By the time Trinity Church was consecrated on May 1, 1846, it had already begun losing parishioners who were moving uptown. To retain the flock, it decided to erect chapels in the newly fashionable parts of town. Architect Richard Upjohn, who designed Trinity Church, built another in the mid-block that runs from West 25th to West 26 Streets west of Broadway. It was called Trinity Chapel and it opened in 1855 as an Episcopal church.

Eleven years later, Trinity’s clergy house, which is attached to the rear of the church, was added at 16 West 26th Street; in 1870, Trinity Chapel School — architect Jacob Mould’s last remaining building in New York City — welcomed its first students at 13 West 25th Street, just east of the church. Together, the buildings composed what The New York Times has called “a little ecclesiastical village that still surprises newcomers to the area.”

The church exterior was rugged looking stone, with no tower and virtually no ornamentation. The interior, however, was breathtaking. Its single-aisled nave stretched for almost 180 feet and its open ceiling of Norway pine peaked nearly eight stories above the cathedral floor. The walls were faced with Caen limestone from France, giving it a feeling of light. In its day, Trinity Chapel enjoyed great social cachet, especially after novelist and tastemaker Edith Wharton was married there in 1885.

As time passed and the neighborhood around the church became more commercial, Trinity lost parishioners, became run down and was almost abandoned. Not long after the start of World War II, it was put on the market and in 1943, it was acquired by members of the Serbian Orthodox Church. On June 11, 1944, it was consecrated as the Cathedral of Saint Sava, the first Serbian Orthodox church on the East Coast.

The exterior was designated a New York City Landmark in 1968, and in 1982, Saint Sava was added to the National Register of Historic Places. A major restoration of the exterior, including the roof, was completed in 2006 after four years and a cost of some $3 million. Now Saint Sava wants to raise another $5 million to restore the interior, which needs an updated electrical system, repairs to walls and paintings damaged by leaks and the restoration of stained glass windows. There are also plans to restore Jacob Mould’s former church school, now Saint Sava’s parish house.