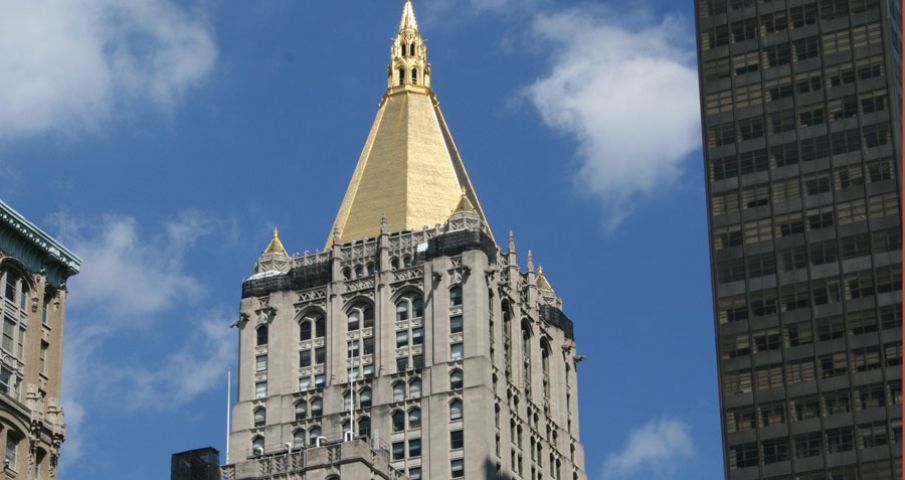 The removal of the scaffolding from the great pyramid atop the New York Life Insurance Building at the end of 2007 uncovered one of the more dazzling pieces of the city’s skyline. Once again, the pyramid’s 25,000 tiles, newly regilded in 23.75-karat gold leaf, were free to add their brilliance to the Flatiron district’s panorama of architectural wonders.

The New York Life headquarters, at 51 Madison Avenue, is a monumental piece of work, sitting on the full block between Madison Avenue and Park Avenue South, from East 26th Street to East 27th Street. Inspired by the Salisbury Cathedral in England, it took two years and $21 million to complete (1926-28) and it is sheathed by the largest single order of Indiana limestone ever used in one building — 440,000 cubic feet. Even its windows evoke power, all 2,180 of them, with their solid bronze frames and sashes. The structure was designed by architect Cass Gilbert, who 15 years earlier had created the Woolworth Building — like the New York Life Building, a designated New York City Landmark. For New York Life, Gilbert took neo-Gothic elements of his earlier work, including 72 gargoyles, and combined them with the geometries of 1920s buildings, marking a significant transition from the revival-style skyscrapers of the early 20th century to the sleek towers of the Art Deco period.

Approximately half of the 34-story building is occupied by New York Life, half by tenants. The pyramidal crown adds six more stories. At street level, the building is entered through ornate bronze doors that open to a breathtaking lobby with coffered ceilings and the light of 22 massive hanging lamps.

The site on which New York Life stands has a colorful history, beginning with the New York terminal of the New York and Harlem Railroad, followed by Gilmore’s Garden (an open-air arena), P.T. Barnum’s Hippodrome, and finally the first two incarnations of the original Madison Square Garden. The second MSG was designed by Stanford White, who would later famously be slain in its rooftop restaurant. After hosting the 1924 Democratic National Convention, the Garden was razed to make way for New York Life, whose earlier headquarters were on lower Broadway.