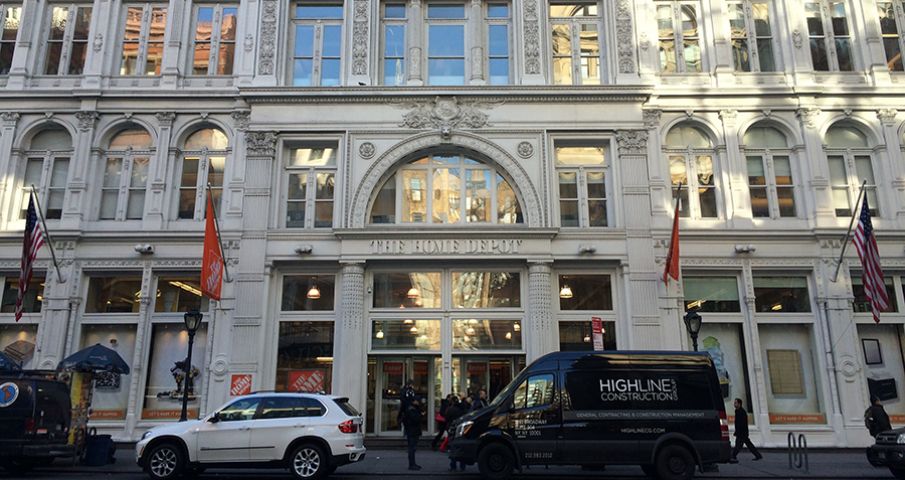 Centered above the main entrance of The Home Depot, the giant home improvement store on West 23rd Street, there is a carving of a lion’s head just beneath a cartouche framing the letters “SB,” a monogram that provides a mute but eloquent clue to the building’s original purpose.

SB stands for Stern Brothers, and more than a century ago, when the area just south of Madison Square was New York’s golden shopping district, Stern’s was one of its grandest department stores. On the northern edge of what became known as Ladies’ Mile, it was for a time the largest department store in New York and one of the earliest to take advantage of a new invention called plate glass, installing huge street-level windows that allowed passersby to see inside, to “window shop,” as it were.

Originally on Sixth Avenue near 23rd Street, Stern’s was founded in 1867 by the brothers Louis, Isaac, Bernard and Benjamin. In 1878, in need of additional space, it opened at 32 West 23rd Street in a six-story cast-iron Renaissance Revival structure designed by Henry Fernbach, a German-born architect better known for his work on such houses of worship as the Moorish-influenced Central Synagogue at Lexington Avenue and 55th Street. Five years later, Fernbach died at his desk, so when the Stern brothers desired to expand further, they called upon another German émigré, W. M. Schickel.

By 1892, Schickel had tripled Stern’s footprint, expanding westward to 40 West 23rd Street. Fernbach’s design was duplicated on the western wing and a central section with a new arched entrance united both wings. Together, the sections formed what still might be New York’s largest cast-iron facade. Painted white and stretching across eight city lots, the building dazzled onlookers on sunny days and was sometimes called “the big wedding cake on 23rd Street.”

Stern’s flourished, as did other retailers on the block, including Teller & Co. (the future Bonwit Teller) and Best & Co. The four Stern brothers were always on hand, at least one of them greeting customers and all of them decked out in cutaway tailcoats. Pianists perched on every floor provided music to shop by, a harbinger of sounds to come. By 1913, however, the city — and its top retailers — was heading uptown. Stern’s did too, moving to 42nd Street, opposite Bryant Park. It continued growing, opened two dozen branches in three states and eventually became part of Federated Department Stores. In 2001, its remaining locations were converted into units of Bloomingdales or Macy’s and Stern Brothers disappeared.

The building, however, did not, even though it was neglected for a while and its once-resplendent facade suffered the temporary indignity of a coating of pink. For most of the 1900s, with 23rd Street abandoned by prestigious stores, the structure housed manufacturing and shipping facilities for a variety of tenants. In 1968, its fortunes began to change. The property was acquired by Jerome M. Cohen, chairman of Williams Real Estate Co., and his partners, who launched a full restoration of the cast-iron facade. Soon, showrooms and offices filled the building.

In 1986, Hasbro, Inc., the multinational toy and board game company, moved in, conducted toy fairs and even inspired a scene filmed there for the Tom Hanks movie “Big.” Hasbro remained almost 20 years, giving way to Home Depot in 2004.

Home Depot is the building’s major tenant, but not its only one. A separate entrance at 40 West 23rd Street leads to the expansive offices and showrooms of the clothing designer Marc Ecko, a space now on the market.

Meanwhile, Home Depot has taken the building back to its original purpose: operating as a retailer with special appeal to New Yorkers. Because this is the company’s first store in Manhattan, its focus is on apartment and brownstone dwellers. Home Depot’s 108,000 square feet fill the entire street level, including space in 28 West 23rd Street, plus a mezzanine and a basement. It stocks 20,000 different products, a figure that climbs to 100,000 if special orders are included. And unlike its other units, this Home Depot has a doorman to welcome customers — a reminder of the era of the Stern brothers even though this greeter doesn’t wear a cutaway tailcoat.