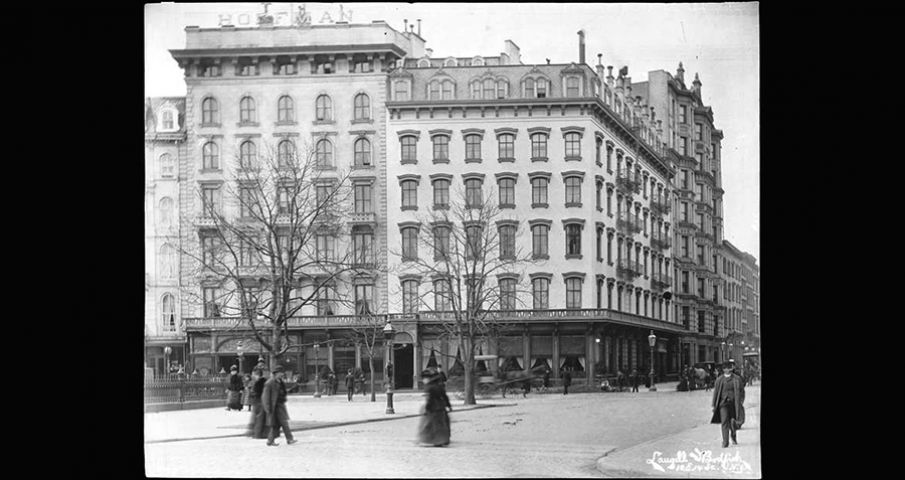 During the 19th century popularity of palace hotels, the Hoffman House, designed by architect John B. Snook, ranked as one of the grandest to grace the District at Broadway between 24th and 25th Streets.

From its beginning in 1864, many of the Hoffman’s visiting clientele were comprised of New York’s political powerbrokers from Tammany Hall, who considered the hotel as their unofficial headquarters. Members included Grover Cleveland, living at the Hoffman on the day he was elected to his second non-consecutive term as President, as well as legendary Democratic Party strategist William Magear “Boss” Tweed. The hotel also welcomed extended stays from diverse notables such as newspaper mogul William Randolph Hearst, actress Sarah Bernhardt and showman William F. “Buffalo Bill” Cody.

One of the hotel’s best attractions was the barroom, where patrons sipped on Wilson Pure Rye Whiskey, the leading house drink of choice, and viewed expensive paintings that included Adolph William Bouguereau’s infamous “Nymphs and Satyr.” Community moralists found the 12-foot masterpiece shocking, which showed four nude women prancing around a faun. The painting was owned by one of the Hoffman’s early proprietors, Edward S. Stokes, who had previously served four years in Sing Sing for killing in 1872 fellow financier and associate Jim Fisk, Jr. over the affections of songstress Josephine Mansfield. A fictionalized account of their story was the 1937 film The Toast of New York starring Cary Grant.

The Hoffman’s in-house art and personnel weren’t the only scandalous events to make headlines for the hotel. In 1867, The New York Times reported that a lawyer registered under the name of C.C. Woodman took a room on the sixth floor and shot himself in the head. Letters found at the scene expressed the 35-year-old’s despondency over life. And in 1872, a 32-year-old Cambridge University educated, ex-British Army officer named George C. Van Eck died in a top floor room after reportedly ingesting a lethal mix of opium, laudanum and brandy.

In need of a makeover after nearly two decades, the Hoffman underwent a series of improvements starting in 1882 that would later feature an expansion with a 12-story, 216-room fireproof steel annex designed by architect Rudolphe L. Daus, the addition of  neighboring Albemarle Hotel, which had opened in 1860, and a modernized Broadway entrance with square pillars made of Numidian marble.

New Year’s 1907 proved to be one of the hotel’s remarkable reopenings. Catering to world travelers as well as locals, visitors enjoyed private dining parlors that included designated English rooms decorated with old English tapestry, a Louis XV breakfast room and the Chinese room filled with bamboo furniture. And in a room surrounded by ventilators, musicians played melodies that could be heard throughout the hotel. On the upper floors, where private apartment suites existed, walls were made of Italian marble and contained furnishings such as glided footrests.

Other distinctive amenities were Turkish and Russian baths, a Ladies’ writing room, butcher shop, attendants in waiting, an in-house physician and a refrigerating plant capable of making 20 tons of ice each day. On the 10th floor was the Garden Restaurant, a favorite among those, according to the hotel’s promotional guide: “Here, where all the delicacies of the season are being served to the comfort-seeking guests, they can look down on the toiling, over-heated pedestrians far below.”

The Hoffman’s high-profile stature, however, began to diminish due in part to the nationwide Panic of 1907, an economic crisis that forced it and numerous businesses to file for bankruptcy and the decline of the area as a hotel hub. With an inability to meet their mortgage and other expenses, the Hoffman House eventually closed its doors in 1915 and was demolished to make way for the opening of a 16-story office and loft building.

Image via Daytonian in Manhattan