The History of Learning at 55 East 25th 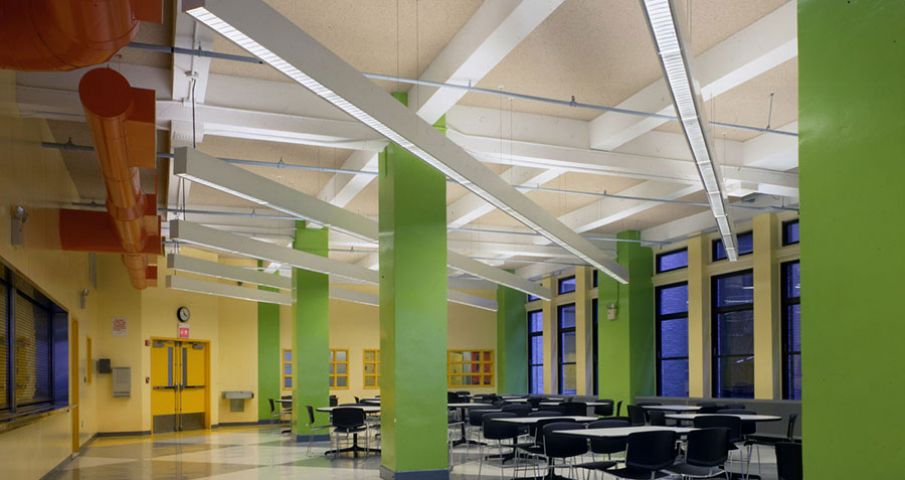 As students head back to school, one’s thoughts turn to crisp autumn leaves, shiny apples in brown paper bags, and the wonderful musty smell of the school library. One particular block of the Flatiron District, 55 East 25th Street, also springs to mind, as it has had the great fortune to be the address of not one, but two innovative institutions of learning: School for the Physical City and Baruch College Campus High School.

Built in 1912 for a reported $300,000, the East 25th Street property was the creation of New York City public school alum and shirt manufacturer Israel Unterberg. Area architects Simon I. Schwartz, Arthur Gross, and B.N. Marcus were commissioned by Unterberg to design the 16-story, L-shaped structure. When the building opened for occupancy, it shared the dual street address of 352 Fourth Avenue and 55-59 East 25th Street.

For the next several decades, Fourth Avenue real estate provided an economic boom to the neighborhood as “the center of one of the important business districts in the city,” reported the Real Estate Record and Builders Guide on September 4, 1915. “There are thirty-one new commercial structures on this thoroughfare, varying in height from one to twenty stories.” Tenants of the area’s dynamic properties included leaders in the silk trade and woolen industries.

Toward the end of the 20th century, however, the commercial community would welcome to the neighborhood a real estate trendsetter–a public high school. Located on the first five floors of 55 East 25th Street, the School for the Physical City was “part of an experiment begun under the former Schools Chancellor, Joseph A. Fernandez, to establish smaller, easier-to-manage schools with student bodies that would ultimately be one-third of the average at the 124 older high schools in the city,” wrote The New York Times on October 31, 1993.

“It is one of the new, small theme schools inaugurated in 1993/94 by the New York City Board of Education with support from four non-profit organizations, initiated under the New Visions School Program by the federal government,” reported PEB Exchange: The Journal of the OECD Program on Educational Building in June 2000.“The commercial location reinforces a growing trend in city planning philosophies which leans toward the creation of mixed-use facilities and districts.”

After spending its first two years at a temporary site on West 17th Street, the School for the Physical City moved to its permanent location on East 25th Street, between Madison Avenue and Park Avenue South, in 1995. The school’s new 55,000 square foot home featured floor plans designed by the award-winning architectural firm of RKTB. The building offered a level of infrastructure awareness to its student body composed of grades 6 through 12.

“Structural columns on every floor are painted vivid green, overhead water pipes are painted blue, and air conditioning ducts are painted in a variety of colors,” noted the architecture industry website Architizer. “At the same juncture on every floor there is a small viewing panel, painted green, that lets one see into the room containing the heating, ventilation and air-conditioning equipment for that floor.”

Mark Weiss, the school’s then principal, told The New York Times on October 31, 1993, “It’s a matter of inventing it as we go along. It’s difficult what it takes to incubate a school. You have to start somewhere, and if you didn’t push the edges of possibility you might not get started at all.” Two years later, on May 28, 1995, the newspaper hailed the institution with its Sunday magazine cover headline: “A City School Experiment That Actually Works.”

But by the beginning of 2010 academic year, the School for the Physical City closed based upon a report issued by the NYC Department of Education. The School and four other public high schools “had notably low four-year graduation rates, did a particularly poor job helping students who were already behind as incoming freshmen, and proved exceedingly unpopular with prospective students,” wrote The New York Times on December 12, 2006.

The former School for the Physical City property would soon become the home of another groundbreaking educational institution, Baruch College Campus High School, a liberal arts college preparatory public high school featuring grades 9 through 12 that would be located on a college campus. According to the BCCHS website, the school “is dedicated to providing a challenging interdisciplinary liberal arts education for students” and “asks students to explore the philosophical, ethical and aesthetic issues of the human experience.”

Established in 1997, BCCHS was a collaboration between New York City’s Community School District 2 and the City University of New York’s Baruch College. Former superintendent of Community School District 2 Anthony Alvarado, and Matthew Goldstein, a former President of Baruch College, were the school’s co-creators. The school’s initial location was 111 East 18th Street. It briefly relocated to the upper floors of Baruch College at 17 Lexington Avenue, between 22nd and 23rd Streets, before moving to its present location at 55 East 25th Street in 2009.

Since its arrival on East 25th Street, BCCHS has undergone a series of improvements, including the debut of a $150,000 science laboratory in 2013. The school also continues to maintain a record of academic excellence with its current gold medal ranking on the U.S. News & World Report list of Best High Schools, an achievement building developer and former public school alum Israel Unterberg would certainly be proud of.