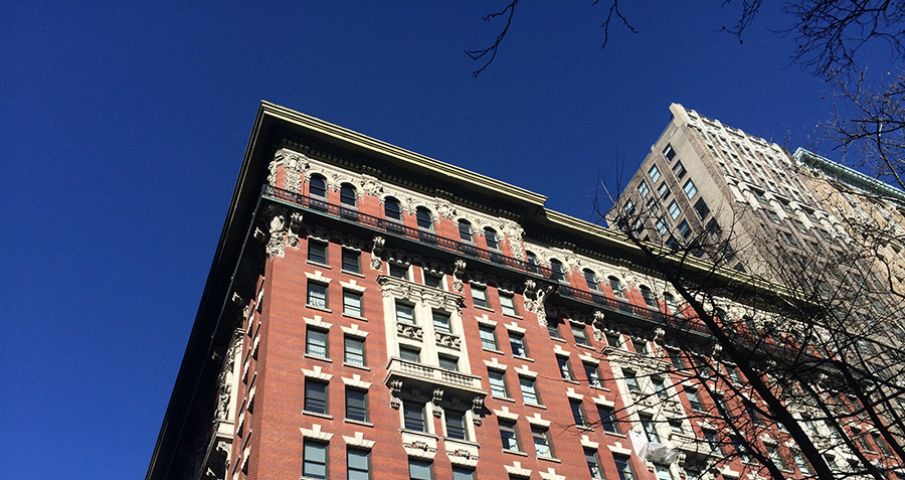 The landmarked 12-story building that borders the north side of Madison Square Park and extends along Fifth Avenue from 26th to 27th Streets has been reborn.

Previously known as the Gift Building, its newest incarnation is a luxury condominium called the Grand Madison and its presence completes an arc that began in the latter half of the 19th century, when the area around Madison Square was the center of social life in New York City and a favorite destination for visitors from abroad.

Back then, the site on which the Grand Madison stands held the home of Manhattan’s leading practitioner of homeopathic medicine, a man named John Franklin Gray. Dr. Gray had as neighbors some of the town’s leading citizens: Wall Street bankers such as Frank Work; the Schieffelin family of the drug house W.H. Schieffelin & Co.; Benjamin H. Field, an incorporator of the American Museum of Natural History; and the Iselin family, pillars of New York society. They lived in brownstones that stretched east along 26th Street from Fifth Avenue to Madison Avenue, facing the park, and north along Fifth Avenue to 27th Street.

Dr. Gray eventually moved away and in 1871, his house was replaced by a much larger edifice designed by a portly fellow named Henry Hobson Richardson. It was called the Brunswick and was one of several residential hotels that sprang up around Madison Square, most notably the Fifth Avenue Hotel, the Albemarle and Hoffman House.

The Brunswick Hotel was particularly popular with visitors from England as well as wealthy young men about town. It was across the street from Delmonico’s restaurant, but boasted six public dining rooms of its own, including a ladies’ restaurant and a ladies’ breakfast room. A prix fixe “bird-and-bottle” dinner was $1.50.

The hotel was also the headquarters of the New York Coaching Club, an organization of extremely affluent men whose hobby was driving four-in-hand coaches.

The Brunswick closed in 1896 and on Dec. 29, 1899, The New York Times reported that a new hotel on that site might soon be built. An unidentified “capitalist” was quoted as saying: “There is no better locality in New York for a hotel than in the immediate vicinity of Madison Square . . . To show how property in that section has increased in value, I can say that we are ready to pay $75,000 for one parcel that was sold in 1873 for $14,000.”

The building that replaced the Brunswick Hotel was completed in 1907. It was called the Brunswick Building, and for a while it also operated as a hotel, then as a warehouse. Midway through the 20th century, it became the home of showrooms for some 150 companies that sold giftware, china, flatware, home textiles, stationery and Christmas ornaments. Its formal address was 225 Fifth Avenue, but for some 50 years, it was colloquially known as The Gift Building.

Made of red brick and limestone in a style called Renaissance Revival, the building was designed by architects Francis H. Kimball and Harry E. Donnell. With its intricate cartouches and stately balconies, it was designated a landmark by the New York Landmarks Commission in 2001 as part of a 10-block area in the Madison Square North Historic District.

In 2004, it was sold to the real estate developer Elad Properties by Green Stamp America, which had owned it for 15 years. After extensive interior renovations, its life as the Gift Building ended and when the wrappings came off, the Grand Madison emerged. The century-old structure began a new life, this time as an elegant residence with 194 condominium apartments, including penthouses overlooking Madison Square Park.

David McNeill, co-president of the Grand Madison board, and his wife, Anne-Marie Francis, were the first people to move in, on Nov. 30, 2006.

“The neighborhood is great and getting better every day,” McNeill said. “There are additional residential buildings coming on line, making it a very viable neighborhood. It’s centrally located, with great restaurants and, with the renovation of 200 Fifth, increasing office space. In short, I would not want to live anywhere else.”