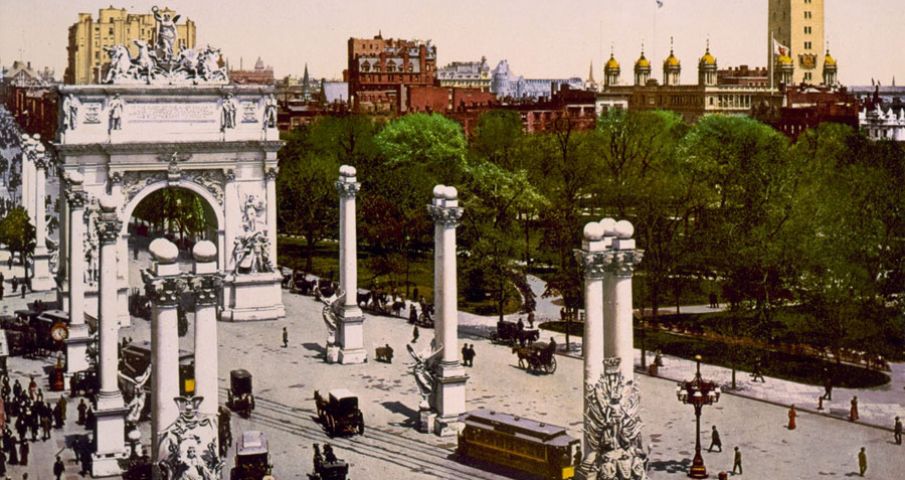 A year after the battle of Manila Bay — a stunning naval victory by the United States over Spain in 1898, an event that established the U.S. as a global military power — the architect of that historic engagement in the Philippines was invited to New York for a triumphal celebration in his honor. If Admiral George Dewey’s entrance into the city in the waning summer days of 1899 wasn’t quite as elaborate as Cleopatra’s into Rome, it was not for lack of trying.

The hero’s welcome that awaited him lasted several days, two of which were declared state holidays by Governor Theodore Roosevelt. The festivities included a flotilla of ships steaming up the Hudson, led by Dewey’s cruiser, the USS Olympia, on Sept. 29, 1899, and culminated in a spectacular parade through Manhattan on Sept. 30. The reviewing stand was at Fifth Avenue and 24th Street, where a colossal arch and colonnade had been erected.

Because time was tight, however, it was decided to first build a temporary arch out of “staff,” a construction material that combined plaster and wood shavings. Later, when enough money had been raised, the arch would be reproduced in stone. That, after all, had been the successful scenario for the Washington Square Arch just a few years earlier.

The Dewey Arch, designed by architect Charles R. Lamb, was based on the Arch of Titus in Rome and was produced by 28 sculptors. It was topped by a quadriga, a chariot pulled by four horses running abreast. This one, in keeping with the occasion, depicted four seahorses pulling a ship.

The day after the parade, The New York Times published almost 29,000 words of coverage. Describing the Dewey Arch, the newspaper waxed poetic: “Imagine arch and columns shining whiter than marble, brilliant and spotless in dazzling candidness. Imagine a brilliant atmosphere electrified by a gusty west wind, through which pours sunshine cooled by the breeze, but giving to every capital on every column, to every projection, and to all the statues and groups and reliefs that charm of keenly cut shadows which pure white marble offers. Imagine the shadows of branches and foliage mottling these white surfaces with dark spots that quiver with the gamboling of the wind.”

The parade itself stepped off from 125th Street at 11:22 a.m. and, to the spirited sound of Sousa marches and the roar of the multitudes, continued south on Riverside Drive, then Central Park West and, finally, Fifth Avenue, which according to The Times, had been swept “as clean as a good housewife’s pantry.”

Contemporaneous accounts place the number of spectators at two million, with most of them seemingly determined to squeeze as close to Madison Square as possible.

Admiral Dewey, together with Mayor Robert A. Van Wyck, was in the first horse-drawn carriage, a splendid Victoria pulled by a quartet of sturdy bays. Forty-three other coaches, filled with assorted dignitaries, followed, and then came almost 35,000 military personnel. Several newspaper accounts reported that the sky was filled with butterflies.

Ironically, when Dewey’s carriage reached the arch, he disembarked and was shown directly to the reviewing stand. Consequently, he never actually passed through his own triumphal arch. That might have been an omen, for despite all the hoopla, Dewey mania turned out to be as temporary as his arch. The plan to convert the monument into something permanent was finally abandoned when fund-raising and public interest waned and in 1901, after the structure began to deteriorate badly, it was removed from Madison Square, just another fallen arch.

In 1996, a bar and restaurant called Dewey’s Flatiron opened on Fifth Avenue near 25th Street. With its murals of the Battle of Manila Bay and a replica of the Dewey Arch atop the back bar, it may be the only tangible reminder left of the Admiral and his big day at Madison Square.

Image via Library of Congress