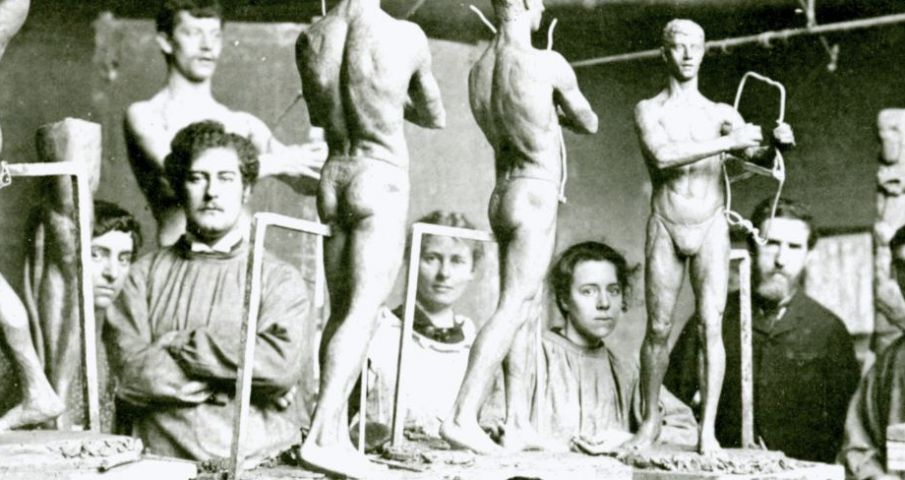 In NYC, October is also known as Archtober, or Architecture and Design Month, the annual 31-day celebration of the stellar architectural sights found within the five boroughs, including Manhattan’s Flatiron District! In addition, October 3, 1887, marks of the debut of the Art Students League of New York in Flatiron at 143-147 East 23rd Street, between Lexington and Third Avenues. In celebration of the League’s arrival in the neighborhood more than 130 years ago, the Flatiron/23rd Street Partnership takes a look back at the early days of one of the nation’s premier schools for aspiring artists and designers and its five-year occupancy in the area.

When the Art Students League classes were launched on September 15, 1875, the organization was comprised mostly of women, who had been students at the National Academy of Design in New York City. As new League members, their mission would be, according to the Art Students League of New York’s website, “emphasizing the importance of artistic creativity, maintaining the greatest respect for artists who devote their lives to art, and educating students in the process of making art in an environment where anyone who wishes to pursue an art education can realize his or her full potential.” The League would also reportedly become the first major institute to allow women to do live drawings.

The League’s first school occupied the top floor of a building located at 108 Fifth Avenue near the corner of 16th Street. In 1878, the League voted to become an incorporated organization and also sought a charter from the State of New York. “This revolutionary approach to running an art education institution, which remains in place today,” notes the League’s website, “assured students a central part in the future of the League and granted them power in making decisions that would affect their own development as artists.” 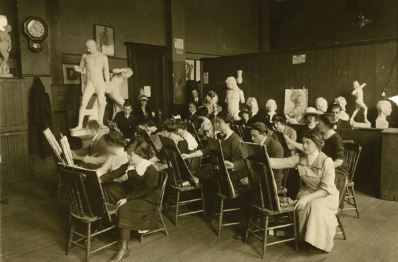 In 1882, the League, now growing in popularity with an enrollment of nearly 500 students, relocated to lease much larger headquarters on the top three floors of 38 West 14th Street, between Fifth and Sixth Avenues. The League would shortly thereafter seek an even more sizable accommodation for their expanding operations within the Flatiron District. On October 3, 1887, the League commenced classes at 143-147 East 23rd Street, between Lexington and Third Avenues. This site had been the former wareroom of Sohmer & Co., the noted piano manufacturer that reportedly claimed Oscar-winning composer and lyricist Irving Berlin of “White Christmas” fame as one of its customers.

The East 23rd Street relocation had been spearheaded by League president Charles R. Lamb, who would soon become the architect behind the 1899 design of the military triumphal Dewey Arch at 24th Street and Fifth Avenue. “The classes are large and full of enthusiasm,” wrote Appletons’ Dictionary of New York and Vicinity about the League in 1889.  Class costs varied in each category, which included $70 for the season or $12 a month for a half-day portrait class, or $120 for the entire season or $22 a month for a full-day session. 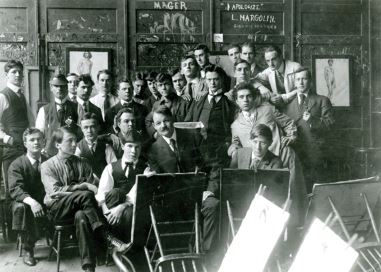 Within a year, the League proved to be a success in the neighborhood. “The 19 classes had been in daily session since October 3, embracing four life, three painting, five antique, two modeling, two costumes, sketch, composition, and artistic anatomy classes,” reported The New York Times on April 18, 1888. “During the season 652 students from all parts of the country and from Canada have been at work. Receipts for the year were $17,000 and expenditures $22,000, including $6,500 spent on improvements to the building.”

Sculptor Augustus Saint-Gaudens, whose 13-foot, nude weathervane copper statue named Diana appeared atop Madison Square Garden on East 26th Street from 1893 to 1925, was one the League’s leading instructors at the East 23rd Street location. And even some individuals from the world of literature considered the League an ideal workspace. Novelist Stephen Crane reportedly wrote The Red Badge of Courage at the East 23rd Street property. In the 20th century, the League’s Midtown Manhattan site would become the go-to destination for a number of prominent artists who were either students or taught at the institute, including Norman Rockwell, Georgia O’Keeffe, Jackson Pollock, and Helen Frankenthaler.

In 1892, with a reported 900 students, the League sought an even larger property with considerably more desirous conditions. “Rodents scampered around in search of crumbs from the dried bread that students used as erasers,” reported The New York Times on September 9, 2005, about the East 23rd Street facility. “Pungent aromas from neighborhood stables and sewer gas filled the rooms. Enough was enough, even for artists, hardy souls that they are. In 1889 the League–or rather its governing board, a third of which must consist of enrolled students–decided to secure a permanent home. And it did so the way it did everything else, cooperatively.”

The League’s search for a new home ended with its arrival at 215 West 57th Street, between Seventh Avenue and Broadway. “Three stories of the building are occupied by the League,” wrote The New York Times on October 16, 1892, “and fitted with the finest and most completely appointed, best ventilated and lighted classrooms and studios devoted exclusively to art instruction in the world.” This relocation proved to be an advantageous one for the League, then and now.

In 1968, the organization’s 57th Street location gained designation status as a New York City landmark and later appeared on the list of National Register of Historic Places in 1980. The League’s former location on East 23rd Street, eventually become an SRO hotel known as Kenmore Hall. It was a reported “hotbed” for crime before its 1999 renovation and conversion into affordable housing for individuals coming out of the city’s shelter system, persons living with HIV/AIDS, and homeless veterans. Also, in 1999 the Kenmore received a Best Practice Award from HUD and was named a Finalist for a Fannie Mae Foundation Maxwell Award for Excellence.

As the Art Students League of New York commemorates the organization’s 132 years in the City, including the Flatiron District, it remains “a place where you are an artist if you say you are,” noted The New York Times on September 9, 2005. “Nobody–except maybe a fellow painter with outsize ambitions and an unrequited crush–is likely to say: “You’re going nowhere. You’re not cool.” And if somebody does, fine. Don’t leave. Show up on time for class, get down to business and feel a New York art monument, one that we can all be a part of, breathe.”