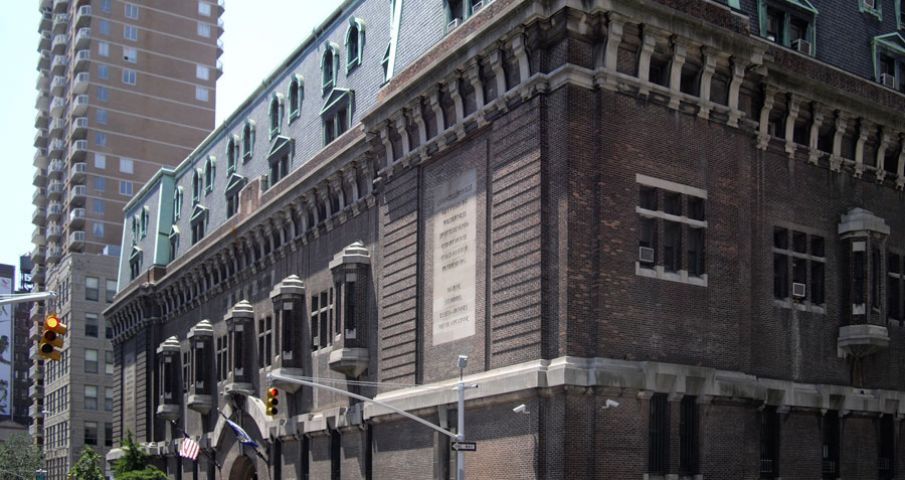 The 69th Regiment Armory — that massive red-brick fortress on Lexington Avenue between East 25th and East 26th Streets — is steeped in history that is much more than military.

Since its completion in 1906, the Armory has been as much of a home to the visual arts as it has to one of the most storied fighting units in U.S. history. It has also been the home court of the New York Knicks basketball team in the late 1940s on nights when Madison Square Garden was unavailable; a tennis center; a fashion runway; and a homeless shelter. It has also been the site of such disparate events as Playboy magazine’s 50th birthday party and, in the days immediately following 9/11, a place where friends and relatives of the missing gathered to post pictures of their loved ones and lend support to one another.

Designed by the architectural firm of Hunt & Hunt in 1904, the structure consists of the two standard elements of armory design, an administration building and a vast drill shed, but it was the first armory in New York not to look medieval. It has no turrets or towers or crenellated parapets — all elements of conventional armories — but relies instead on classically inspired design. In 1996, it became a National Historic Landmark. New sheathing atop the drill shed, currently being refinished, and a one-story addition to the administration building in 1929 are the only major changes to its original appearance.

The Armory is the home of the 69th Regiment, one of the Army’s most romanticized units. Formed in 1851 by Irish immigrants, it was nicknamed “the Fighting 69th” during the Civil War by a distinguished adversary: Robert E. Lee. It has served with gallantry ever since, in battles from Bull Run to Baghdad, and its story has been a staple of pop culture. The 1940 movie “The Fighting 69th” recounts the exploits of the regiment during World War I, portraying such legendary figures as Father Francis J. Duffy, the regimental chaplain, whose statue stands today in Times Square; Major William “Wild Bill” Donovan, who became the first director of the OSS; and the poet Joyce Kilmer, slain by a sniper in France. Today, the soldiers who train at the Armory are members of the 1st Battalion, 69th Infantry, New York Army National Guard.

Stark reminders of the Armory’s military history can be seen in two display cases in the vestibule containing battlefield artifacts. Among them: Civil War ammunition from “Yankees” and “Confederates”; a World War I Prussian helmet; a Japanese Army helmet from World War II; and night-vision binoculars and a black face mask used by insurgents in Iraq.

The Armory achieved worldwide fame in 1913 when it became the site of the International Exhibition of Modern Art, the first major display of contemporary art in this country and one of the most influential events in the history of American art. Some 1,300 pieces were exhibited, giving many Americans their first look at artists such as Paul Cézanne, Vincent Van Gogh, Henri Matisse and Pablo Picasso.

It has since become the site of numerous art fairs, antiques shows and a variety of fund-raising luncheons and dinners.