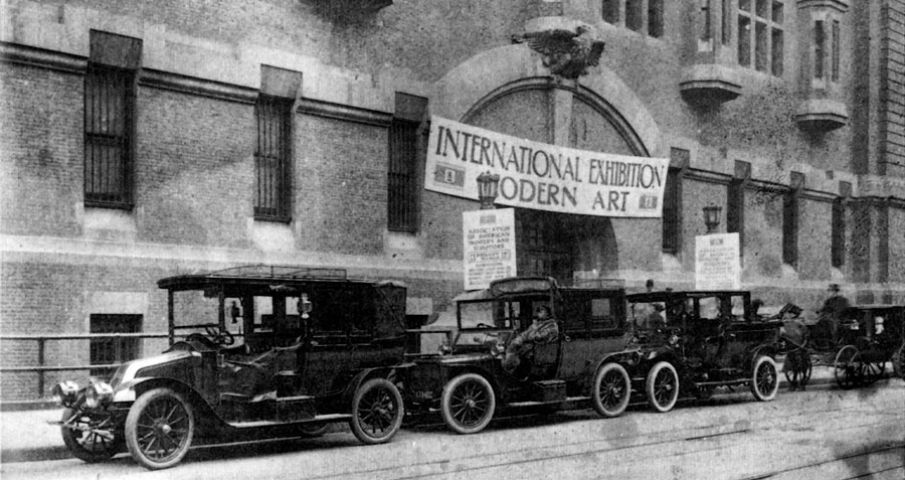 Perhaps it is hard to believe now, but just before the first World War, relatively few Americans were familiar with artists such as Pablo Picasso, Henri Matisse, Paul Cézanne, Vincent Van Gogh and scores of others equally notable. Even fewer had ever seen their work.

That all changed in February of 1913, when one of the most important exhibits in the history of modern art was mounted, and it all happened in the Flatiron district. The epicenter of this monumental event was the 69th Regiment Armory, the red brick fortress on Lexington Avenue and 25th Street. It had been completed seven years earlier, but first entered the national spotlight as the setting for the International Exhibition of Modern Art, or as it became known, the Armory Show.

As a bronze plaque next to the Armory entrance points out, it was an event that “revolutionized the American art movement by bringing to national attention the new art forms of native American and modern European painters and sculptors.”

The show opened on Feb. 15 and ran for a month. By the time it ended, on March 15, an estimated 75,000 visitors had toured the 18 galleries on the Armory’s main floor and saw almost 1,300 paintings and sculptures by more than 300 artists from the U.S. and Europe. Many were delighted by what they saw. Many more were dismayed.

Modern art, especially Cubism and Futurism, was a shock to a public accustomed to more conventional means of expression. One of the most controversial works on exhibit was Marcel Duchamp’s “Nude Descending a Staircase, No. 2,” in which the artist depicted motion by superimposed images that were similar to stop-motion photography. One critic likened it to “an explosion in a shingle factory.” Cartoonists made fun of it. The painting now hangs in the Philadelphia Museum of Art, has been seen by millions and today barely raises an eyebrow.

The New York Times seemed particularly offended by facets of the Armory Show. It published a lengthy article on March 16, 1913 with the headline: “Cubists and Futurists Are Making Insanity Pay.” The words belonged to a painter, magazine illustrator and art critic named Kenyon Cox, who said, among other things, that Cubists and Futurists “simply abolish the art of painting.”

The editorial writers at The Times saw something a lot more sinister.

On the same day as the interview with Cox, the newspaper ran an editorial that called Cubism “part of the general movement, discernable all over the world, to disrupt and degrade, if not to destroy, not only art, but literature and society, too . . . [T]he cubists and futurists are . . . cousins to the anarchists in politics, the poets who defy syntax and decency, and all the would-be destroyers who with the pretense of trying to regenerate the world are really trying to block the wheels of progress in every direction.”

On March 15, the show was over, headed for Chicago, then Boston. Only one year later, World War I erupted. As the home of the Army’s famed “Fighting 69th,” the Armory — no longer the setting for a war over art — could return to its original mission: preparing soldiers for the art of war.