The Amory Show at 100: Modern Art and Revolution 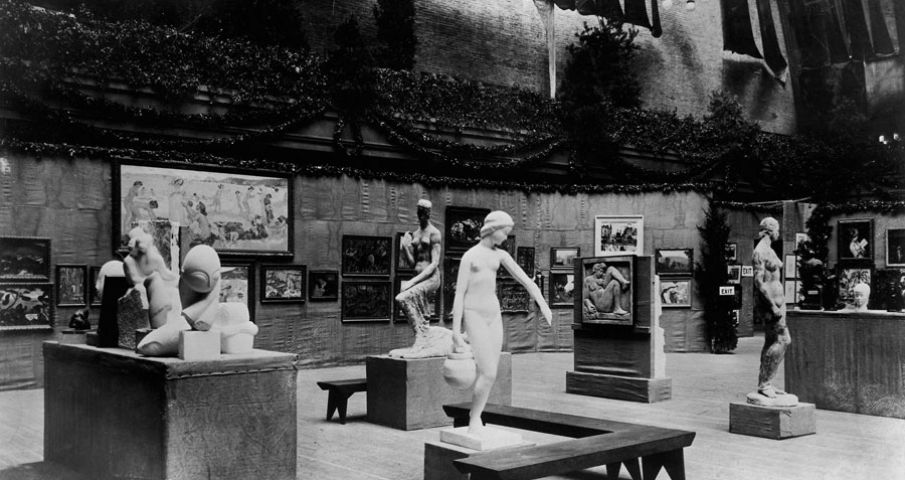 This fall, 100 years after the milestone Armory Show of 1913, the New-York Historical Society is celebrating the show’s centennial through February 23, 2014 with its display The Amory Show at 100: Modern Art and Revolution, which features more than 100 paintings and sculptures from the 1913 event. In honor of this exhibition, we take a brief look back at the show that introduced the American public to European avant-garde painting and sculpture.

A century ago on the wintry night of February 17, 1913, the warmth of brilliant floodlights and a blaring brass band greeted 4,000 stylishly attired visitors to the public opening of the International Exhibition of Modern Art at Flatiron’s 69th Regiment Armory. Guests stood in astonishment at the introduction of 1,200 avant-garde American and foreign works by artists, including Cézanne and Picasso, and experimental forms such as Cubism and Futurism, in 18 temporary rooms in the 63,000 square foot Beaux Arts building on Lexington Avenue between 25th and 26th Streets.

“The exhibition had been calculated from the beginning as a mental jolt to stir America out of its long esthetic complacency,” wrote Milton W. Brown in his book The Story of the Armory Show. Former U.S. President and Flatiron native Theodore Roosevelt reported in his March 29, 1913 review in The Outlook, “The exhibitors are quite right as to the need of showing to our people in this manner the art forces which of late have been at work in Europe, forces which cannot be ignored.”

The Armory Show was an idea conceived in 1911 by the newly formed Association of American Painters and Sculptors, the self-described “society for the purpose of exhibiting the works of progressive and live painters.” The group met with members of the global art scene and sought investors for their event. They also negotiated with officials at the Armory to be the host of the month-long exhibit for a $5,000 rental fee, plus $500 for janitorial services, after considering venues such as the much larger and costlier Madison Square Garden, then located at 26th Street and Madison Avenue also in the Flatiron District.

The show’s hours were 10 a.m. to 10 p.m., Monday through Saturday, and 2 p.m. to 10 p.m. on Sunday. The admission fee was $1, but only 25 cents before noon. On March 15, 1913, the landmark show’s final day, AAPS member and artist Jerome Myers observed that the overwhelming popularity of the event had created “the wildest, maddest, most intensely excited crowd. Millionaires, art collectors, society people, all were packed in like sardines.” In The Story of the Armory Show, author Milton W. Brown noted, “The Armory Show had a profound effect on artists, collectors, and the art market. It set in motion forces which eventually transformed the character of American art.” During the four-week period, a reported 70,000 visitors had attended the show.

Image via The New York Times