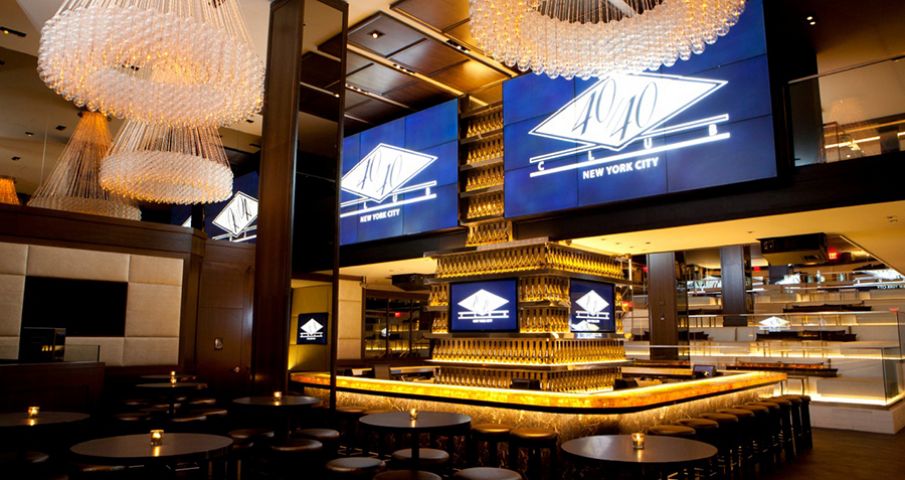 When the 40/40 Club opened in 2003, it was an instant hit. “I love sports,” co-owner and mega music mogul Jay-Z has said, “and wanted to create an environment that is conducive to match my lifestyle, while watching the games at the same time.”

With the club’s growing brand of entertainment, the Grammy-winning entrepreneur and business partner Juan Perez announced last June a $10 million redesign. The makeover, led by award-winning architect Jeffrey Beers, would “re-introduce a revolution in luxury sports-watching and the nightclub experience” at the Broadway and 25th Street location. Recalls Beers, “The club was almost eight years old and needed a facelift. The individual spaces in the old club were segregated from one another, so our goal was to reconfigure it and open everything up to allow guests to experience the space holistically.”

The 12,000 square foot property, which reopened in January, features four VIP lounges, state-of-the art LED TV screens, an illuminated top bar that surrounds an 18-foot tower, a marble stepped arena style seating area, an iPod dock, and offers patron party packages from “March Madness” to “Girls’ Night Out.” Sports memorabilia on display include the jerseys of Barry Bonds, José Canseco, Alex Rodriguez and Alfonso Soriano, the elite 40/40 group, a term for baseball players who have hit 40 home runs and stole 40 bases in one season, and also the club’s namesake.

“The new space is open and has great movement, which really speaks to the lively social atmosphere of this club,” says Beers. “You can watch games on one of the many TVs or simply watch the interaction amongst people from all over the club. It’s an environment that invites a variety of spatial interaction with its creative layout and contemporary design accented by timeless references. The overall feel of the space is one of sophistication and urban luxury, devoid of the austere pretentiousness that one finds in many traditional nightclubs these days.”

As for the menu, Mike Shand, Jay-Z’s personal and head chef, revamped it for a series of “First Base” appetizers like herb crusted mac and cheese, chicken empanadas and grilled lobster and crab cakes; “Second Base” samplers such as the “We Want It All,” which features beef and turkey sliders, fries, wings and southern fried catfish or chicken fingers; and “Third Base” entrées from braised beef short ribs to colossal shrimp.

Interestingly, the 40/40 Club isn’t the first lavish venue to occupy this Flatiron space. It’s also where a section of the Hoffman House stood, one of the district’s premiere hotels during the late 19th century. But by 1915, the hotel was closing to be replaced by an office building, where businesses from the apparel industry to producers of novelty items sought leases for the next several decades. Tenants included button trade leader Rothschild Brothers & Co., who moved in 1916; Ignatz Strauss & Company, a supplier of ladies’ fans, in 1919; Savada Brothers, a manufacturer of boys’ blouses, in 1934; John Dritz & Sons, maker of rugs, notions and yarn, in 1949; the Consolidated Sewing Machine and Supply Company, in 1952; F. Jacobson & Sons, specialists in men’s shirts, sportswear and pajamas, in 1960; and the William Shaland Corporation, importers of toys, in 1964.

It would be the toy industry’s dominant presence in the area that led property manager Adams & Company to consider the site as a single-industry building during the last decade. But increasing company relocations had the commercial brokerage firm reassess their plan. “I’m proud of the repositioning work we’ve done at 1115 Broadway,” said James Buslik, a principal partner at Adams, in an interview to The New York Times last year that mentioned the 12-story building and the ground level club, which has a side street entrance. “The 40/40 Club is making a huge investment into the property.”

Adds Beers, “Perhaps one of our greatest responsibilities in terms of design was to make the club something visually distinct that truly spoke to the Jay-Z business empire. This isn’t a cookie cutter nightclub. It has a very distinct image. In turn, Jay-Z is a living legend with his own unique and highly recognizable persona. Therefore, creating a bridge between the two was perhaps one of our greatest accomplishments. The new design has elevated the 40/40 brand to an entirely different level that better represents the effortless cool and urban luxury of the Jay-Z brand.”