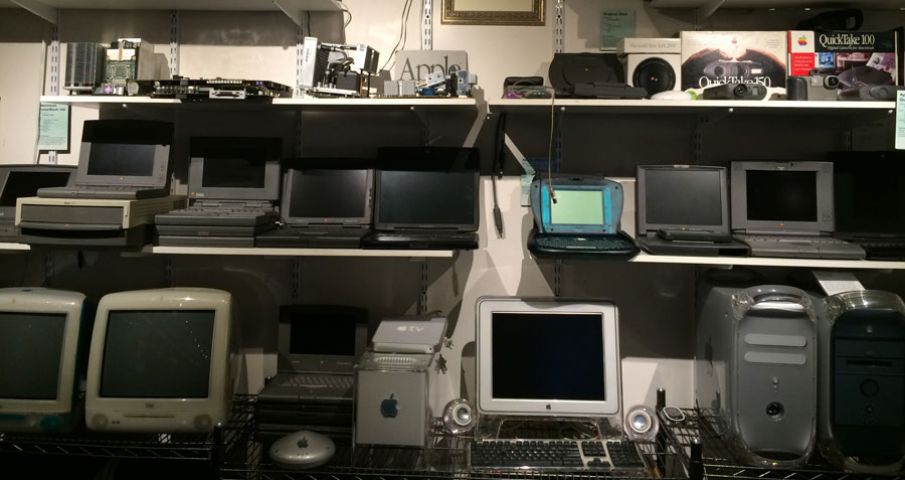 The first things you notice when you walk into Tekserve, the Apple specialist on 23rd Street, are the radios. They sit on six long shelves that line most of a brick wall just to the left of the entrance, more than 120 of them, many in gleaming wooden cases. They are the kind of radios with tubes on the inside and names like Philco and Zenith and Admiral on the outside. You almost expect that turning one on will bring you the latest adventures of “Fibber McGee and Molly” or Walter Winchell rat-tat-tatting the news to “Mr. and Mrs. America and all the ships at sea.”

Those radios are just a taste of what may be found inside Tekserve. Descend one flight of stairs into the basement and enter a technological time tunnel where more shelves are laden with dial telephones, cameras that use something called film, manual typewriters, microphones, an early answering machine from Bell Labs and a wire recorder from the 1950s. There are also vintage desktop computers, among them a 1983 Apple Lisa that debuted with a price tag of $9,995.

Virtually all these artifacts of an analog world were collected by Dick Demenus, the man who founded Tekserve with partner David Lerner in 1987 and turned it into New York’s go-to place for ailing Macintoshes.

Tekserve’s best-known piece of vintage technology is the 56-year-old bright red Coca-Cola machine on its main floor. (“It’s as old as I am,” said Lerner.) When it was new, it dispensed bottles of Coke for one dime. Still does.

“I’m an avid collector, mostly of technical equipment,” said Demenus, 66. “I’ve been collecting since the 1970s, not antiques, but oddball stuff. I’m interested in old technology. Study it and you can trace a path right to the present day. People didn’t just get smart today.”

One of the basement items is a transmitter once used by the radio station WBAI. It’s significant because it was at WBAI some 40 years ago that Demenus and Lerner first met. Eventually, they went into business together, using Macs to design sound systems and learning how to repair them.

“I fell in love with Macs when they first appeared,” said Demenus. “We fixed our Macs, our friends’ Macs. In 1987, David and I took over half my loft and we began repairing Macs. We were totally unauthorized at that time. We contemplated a number of names for the business, including, if you can believe it, Three-Ring Circuits, but we settled on Tekserve.”

The company has been on the north side of 23rd Street, between Fifth and Sixth Avenues, since the beginning, in four locations. The first was Demenus’s loft, where he has lived for 33 years.

In 2002, that changed. Armed with a 15-year lease, Tekserve moved into 119 West 23rd, a store with 20,000 square feet on its main floor and basement, with an additional 6,000 square feet on the second floor. Technically, it is just outside the Flatiron BID’s borders, but since 2007, it has been an active participant in the BID’s sponsorship program and in 2009 it became a marketing affiliate also known as a Friend of the Flatiron Partnership.

“When we began,” said Demenus, “all we did was repair Macs. Now we also sell them, and we sell everything affiliated with the Mac. That includes audio, video, the graphic arts, keyboards for musicians, professional equipment. About half our business is corporate.”

Tekserve also offers free demonstrations, seminars and special events (it partnered with the BID in March, hosting a program for tech and new-media companies), as well as training sessions that can be arranged for individuals or businesses.

“When we opened here,” said Demenus, “we were very cautious about inviting the public in, wondering who would wander in off the street. We even talked about painting the windows black before deciding, hey, we’re a retailer. We installed a greeter at the door. The Apple stores stole that idea from us. We even had a ‘genius bar’ before they did.”

And, it should be noted, Coca-Cola in a bottle, for only a dime.