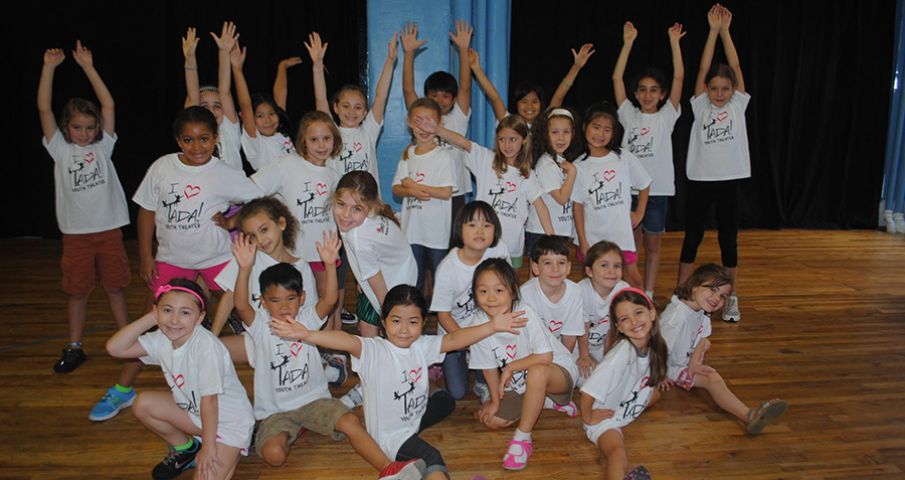 With a Drama Desk Award for “providing an invaluable contribution to the future of theater,” Flatiron’s TADA! Youth Theater is also honored to pay homage to its treasured home in the district. “We love this building and love our space,” say managing director Amy Fiore. “We talk about could it be a little shinier? Would we love to own a space? Yes, but the location is phenomenal!” Between Broadway and Fifth Avenue at 15 West 28th Street, TADA! has served as a theatrical training ground for young Tri-state residents now Hollywood A-listers such as Ricki Lake, Kerry Washington and others. And for Fiore, who has been with TADA! for years, “I was musical theater performer for a hot minute and have always loved children’s theater because it made a difference for me. I was exactly the kids who come here.”

Founded in 1984, TADA! is “based on the simple idea of making growing up easier,” declares Fiore. “And there was a need for musical programming in the city. High School Musical or Glee hadn’t happened yet, and executive and artistic director Janine Nina Trevens had this idea of creating a place where all different kinds of kids and their families could come together. Most children’s theater is adults performing for kids. At TADA!, it’s kids performing for kids.”

The administrative staff of a dozen and a team of 50 teaching artists “want the kids to build self-confidence and not have to wait until they’re older to have an artistically, satisfying and professional experience,” acknowledges Fiore. “And it’s fantastic to see the pot luck dinner parties we do after opening night. They all light up the Sternos and they all clean up. They get to know each other and it is a melting pot!”

Each year, approximately 80 kids between the ages 8 and 18 are invited by audition to join the Resident Youth Ensemble’s year-around program for free, says Fiore. “They have a core, raw talent and a dedication to that talent,” she admits, “and it’s kind of all you need, it has to be that mix.” The organization has produced more than 70 productions, many of which are original works, such as Everything About School (Almost), with its theme about friendships and memories. The show can be seen now through Sunday, August 12, 2012.  Tickets range from $8 for children to $25 for adults. Adds Fiore, “Every time a show ends and you see a group of kids, you see them look at each other and they talk about being a family. It makes me cry every single time. It’s about being a family and about being crazy and silly, but working really hard and caring about art and caring about making a great show.”

And with a locale that’s “smack in between Penn Station and just about every subway line,” states Fiore, there’s a great ease for kids to get here. “If they’re working on a show, it’s Wednesday through Friday every day after school, and then Saturday and Sunday all day. Once the show starts, it’s Saturdays and Sundays matinees.”

“It’s fun to be a part of this neighborhood that’s changing,” says Fiore about the area’s significant history. More than 100 years ago, the theater’s building was one of many at the forefront of the neighborhood’s transformation from residential to commercial real estate development. The 10-story steal frame Renaissance Revival style structure, with its granite, brick and terra-cotta facing and row of colossal caryatids, found fame and fortune in the fur industry at the dual address of 13-15 West 28th Street. Constructed between 1895-1896 and designed by John Stewart and Henry Otis of the architectural firm Barney & Chapman for property owner and printing press heir Robert Hoe, the building would become one of the district’s earliest skyscrapers and leased as offices for 15 years to global import and export furrier Révillon Frères, according to The New York Times on February 15, 1896. The wholesale luxury goods business, which was established in Paris in 1723, also had trading posts in the Artic Circle and would later finance the 1922 silent film documentary, Nanook of the North, about the lives of Inuit residents. Rebranding the New York City building with its company’s name, Révillon Frères also owned a warehouse at 135 West 25th Street, where “shipments of raw furs with highest cash prices” were received for fur garments such as opera wraps, according to a firm ad in the August 1903 edition of Fur Trade Review.

In the following decades, the West 28th Street property would also play host to a series of theatrical organizations such as the Ubu Repertory Theater and Collaborative Arts Project 21 (CAP21), which occupied the space before the arrival of TADA! from their 120 West 28th Street location nine years ago. Reflecting on their 10,000 square feet, two-floor rental, Fiore says, “We have a 90-seat theater downstairs, and a rehearsal theater and offices. It allows the kids to feel like this is home. We have books in the lobby and a donated far-too-big TV screen. We’re not looking to go anywhere. We like it here. TADA! is a destination for families and we want to continue in making it a safe, friendly and welcoming destination for kids.”