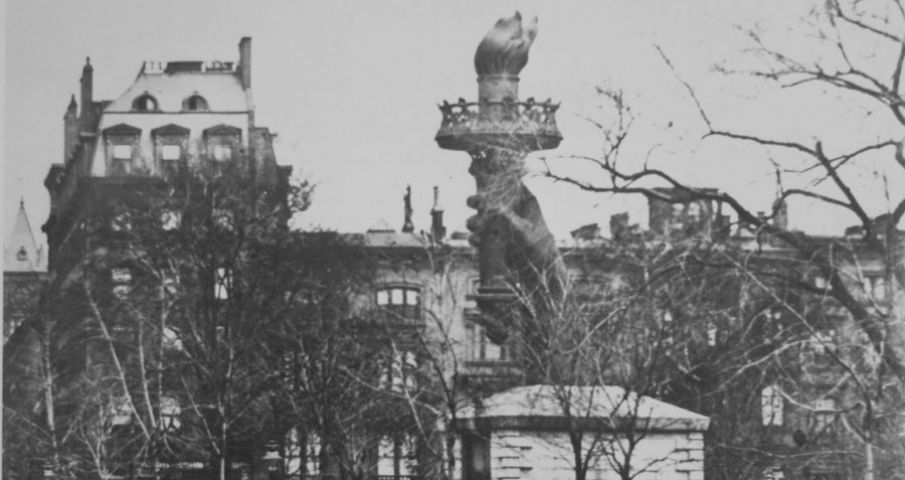 Although the Statue of Liberty was not unveiled in New York Harbor until October 1886, a significant portion of Lady Liberty had become a curious addition to the Flatiron landscape a decade earlier.

French sculptor Frédéric Auguste Bartholdi had originally planned to have the statue ready for presentation to the U.S. on July 4, 1876, when the nation would be celebrating its centennial. Delays prevented that, however, and the work continued in Bartholdi’s Paris studio. Still, the torch and giant right arm (the index finger alone is 8 feet long) had been completed and that part of the statue was shipped to Philadelphia, where it was exhibited at the Centennial Exposition. Later that year, the arm and torch were sent to New York and installed at the northern end of Madison Square Park as part of a campaign to raise funds for the construction of a pedestal.

There it remained for the next six years and though the upraised arm with its golden torch was destined to become perhaps the most iconic symbol of freedom in modern history, its presence in the park did not escape mockery.

The New-York Times (it carried a hyphen in those days, as did the city itself) published an editorial on Feb. 26, 1877, poking fun at the incomplete work.

“Since New-York has delayed to furnish money enough for a completion of the entire statue,” said the Times, “it has been decided that a piece of a statue is better than no statue whatever. Accordingly one of the arms of the Bartholdi statue, with its accompanying hand, has been placed on a pedestal in Madison-square, where it has excited the warm admiration of the infants who infest the place. Thus, those persons who have already contributed money to the enterprise have the pleasure of knowing that their money has not been wasted. They have not been able to procure a whole statue, but they have ornamented the City with a nice large piece of the intended statue’s arm. This is clearly better than no statue at all, and it will be readily admitted that the gigantic arm and hand which ornament the upper part of Madison-square are at least as beautiful as the gilt Seward which sits at the southern gate in the apparent act of collecting statistics of the number of nurses and children who pass its pedestal.”

The last reference, of course, is to the bronze statue of William H. Seward, which had gone up in the park only a few months earlier.

The Times went on to suggest that other parts of Lady Liberty be distributed around the city: “Since one arm of the statue is already in Madison-square, the other arm ought to be placed in Union-square. The head would, of course, be allotted to the City Hall Park, where the boot-blacking youth of our City could climb among its brazen locks, and survey the imposing spectacle of a review of a regiment of Militia from the statue’s eyes. Where to place the body, or the trunk, of Liberty, would be a question requiring careful consideration. Having neither arms, legs, nor head, it would not be easily recognizable by rural visitors . . . ”

By 1882, the Times’ editors seemed to be somewhat more sanguine about the statue, writing: “Those of us who have pensively contemplated the Titanic fist of this statue during its prolonged exhibition in Madison-square are haunted with a desire to see the completed work.”

Four years later, they did. The original torch, having been damaged by an explosion in a New Jersey munitions dump in 1916 and weakened by subsequent modifications, was replaced during a 1980s restoration and is now in the statue’s lobby museum on Liberty Island. From 1886 until 1902, its beacon was as pragmatic as it was patriotic. During those years, the Statue of Liberty was more than a symbol. It was also a lighthouse, and the first to use electricity.