Showbiz and Social Accountability at a Landmark Church 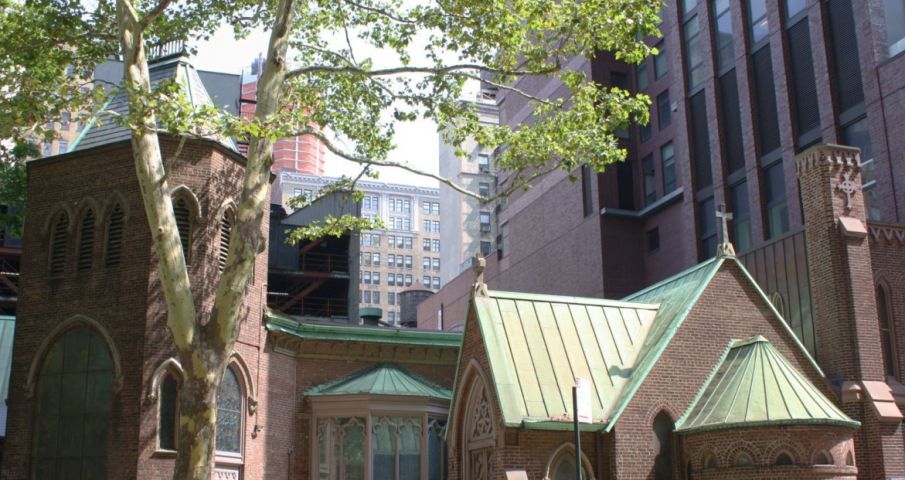 In celebration of the 94th Oscars on March 27th, the Flatiron Partnership recalls the historical link between the Academy Awards and the neighborhood landmark Church of the Transfiguration. Also known as the Little Church Around the Corner, the Gothic Revival structure at 1 East 29th Street and Madison Avenue welcomed not only actors, but served as part of the path of the Underground Railroad for enslaved African Americans during the Civil War.

Completed in 1849, the Church of the Transfiguration would literally live up to its name. The building’s architect is reportedly unknown “as are those for the subsequent additions and alterations, which began in 1852, giving the Church the rambling picturesque appearance that it has today,” wrote the Landmarks Preservation Commission (LPC) report in 1967 about the then one-story house of worship. Later, there were a number of expansions to the property, including a main tower in 1854, a cast iron fence in 1856, and two chapels in 1906 and 1908, respectively.

In addition, Mrs. Franklin Hughes Delano, whose grandnephew was U.S. President Franklin Delano Roosevelt and a fifth cousin of Flatiron native and fellow Commander in Chief Theodore Roosevelt, gifted the Church with a lich-gate in 1896. Designed by Frederick C. Withers, the area would offer “a covered resting place at the entrance of the churchyard,” according to the LPC, and “where the pallbearers could rest the coffin while awaiting the arrival of the priest.” 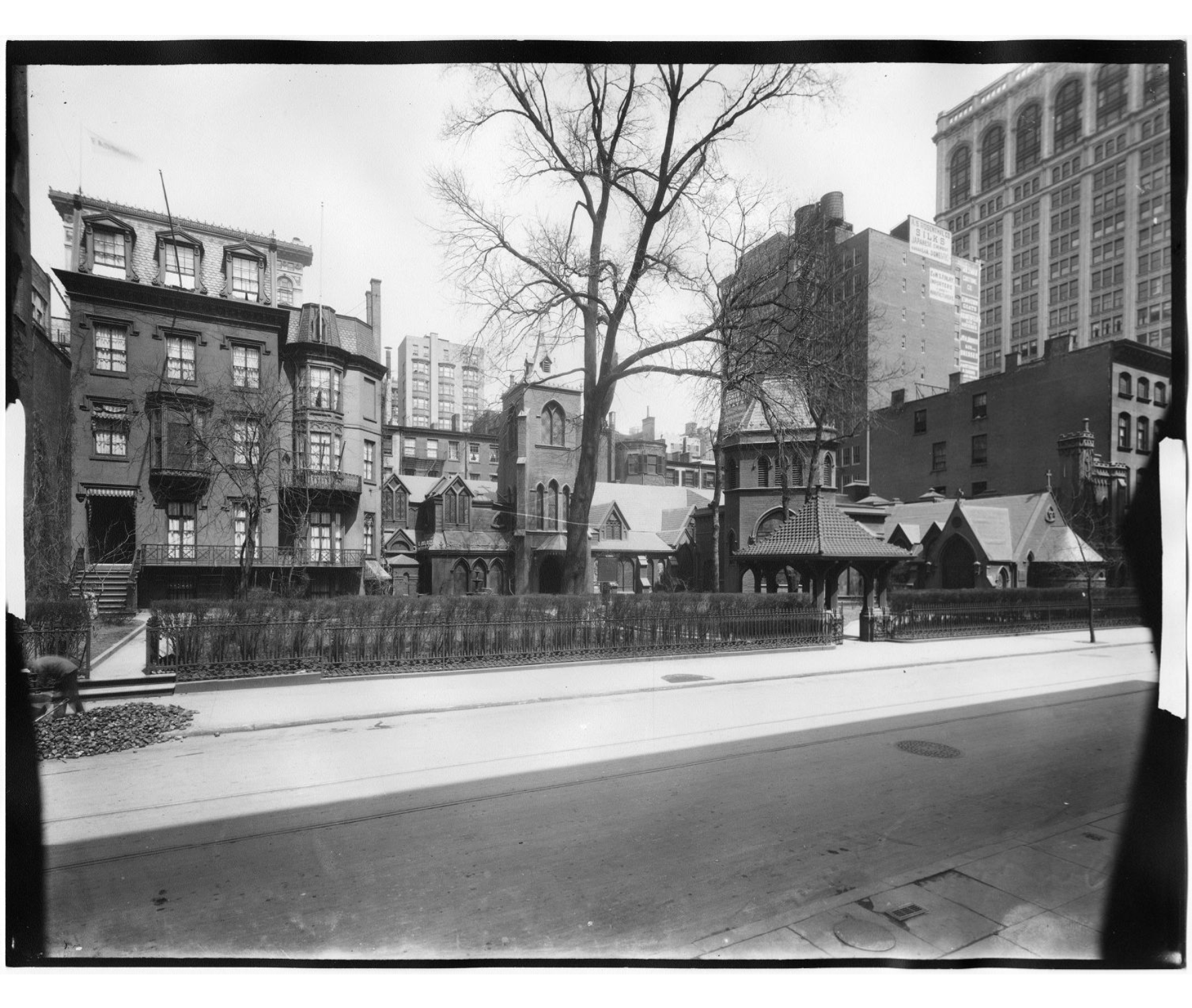 This installation for funeral processions was constructed nearly two decades after a controversial burial service at the Church during the Christmas holiday season of 1870. Two fellow performers of actor George Holland, which included Joseph Jefferson, approached the Reverend William Tufnell Sabine, rector of Protestant Episcopal Church of the Atonement at Madison Avenue and 28th Street, about a funeral service for an actor colleague. Reportedly during this era, however, actors were often considered immoral members within society.

The Church also took on a crucial social role during America’s Civil War in the 1860s. “During this time, the Church was a stop on the Underground Railroad, sheltering escaped slaves on their journey north,” writes littlechurch.org. In addition, the Church became “a place of refuge for African Americans during the New York Draft Riots of 1863—three days of lawlessness, destruction, bloodshed, and lynchings.” The riots were purportedly caused by working-class New Yorkers angered over a new federal draft law, and Black people were often targets of attacks.

By the 20th century, the Church garnered yet another centerstage with the 1923 launch of the Episcopal Actors’ Guild. The non-profit group offers emergency financial assistance to performers “of all faiths, and none,” according to actorsguild.org. Past Guild Presidents have included Charlton Heston, a Best Actor Academy Award winner for 1959’s Ben-Hur, as well as Law & Order’s Sam Waterston, who was a Best Actor nominee for 1984’s The Killing Fields. The Church also serves as a meeting place for fans of the legendary comedy duo Laurel & Hardy, and their beloved Stan Laurel was also a recipient of a Lifetime Achievement Oscar in 1961. 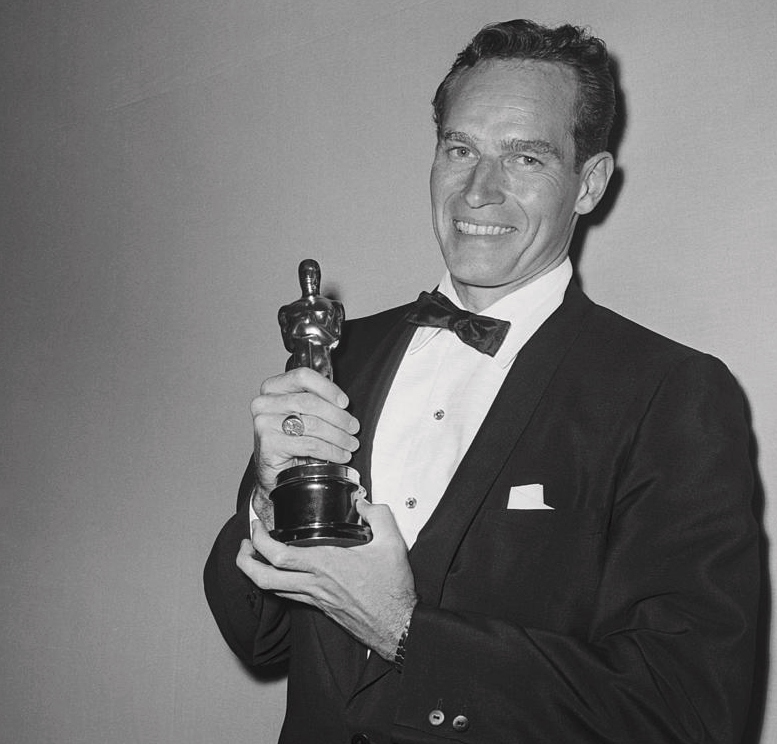 Over the years, the Church would also go on to collect its share of accolades. They included designations as a New York City Landmark in 1967 and landing on the list of National Register of Historic Places in 1973. In their landmark designation report, the LPC concluded that “on the basis of a careful consideration of the history, the architecture and other features of this building, the Landmarks Preservation Commission finds that the Church of the Transfiguration has a special character, special historical, and aesthetic interest and value as part of the development, heritage and cultural characteristics of New York City.”