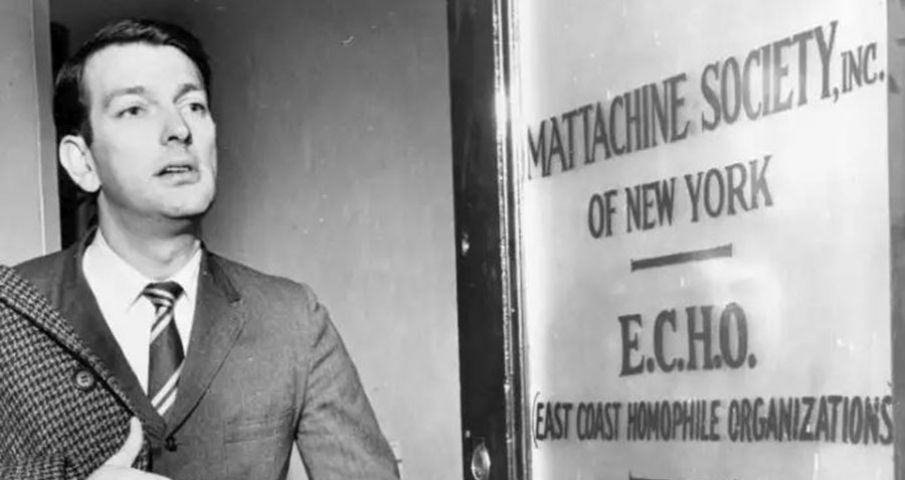 This year’s NYC Pride March, beginning at noon in the Flatiron District on Fifth Avenue and 26th Street on Sunday, June 30th, will also commemorate the 50th anniversary of the Stonewall Inn rebellion that led to the modern-day LGBTQIA+ rights movement. In honor of the occasion, the Flatiron/23rd Street Partnership looks back at two pioneer groups that once occupied offices in the neighborhood while campaigning for gay and lesbian causes before the 1969 Stonewall uprising.

Considered one of America’s first gay rights groups, the Mattachine Society was established in Los Angeles in 1951. The nonprofit organization’s name had been derived from the Italian word mattachino, a court jester who would dare to tell the truth to the king. One of the Society’s major missions was repealing discrimination laws, which included the 1953 executive order issued by President Dwight D. Eisenhower that banned homosexuals from Federal employment.

Shortly thereafter, the Mattachine Society began expanding nationwide, which included a New York City chapter created in 1955 by Sam Morford, an industrial psychiatrist, and Tony Segura, a research chemist. In 1959, MSNY opened its headquarters in Flatiron at 1133 Broadway, also known as the St. James Building, between 25th and 26th Streets. At this location, the organization provided on-site and outreach social services to individuals in rooms 304 and 412.

“Advice was given by phone, by mail and in-person without charge and for those who needed professional assistance, referrals were made to physicians, attorneys and psychotherapists who were known for their compassion for and understanding of the problems of gays,” according to records in the New York Public Library’s Archives & Manuscripts division.

Gittings was an advocate for gay youth to have library access to books about sexual orientation. As a college undergraduate, she reportedly had been the subject of rumors based on her close association with a female student. This episode led Gittings to a period of exploration, ranging from reading textbooks about homosexuality to novels that featured lesbians. “At last here were lesbians shown as real people,” Gittings said about the latter in Sexual Politics, Sexual Communities by John D’Emilio. “They didn’t exactly have lives of bliss, but at least they were functioning people and had their happiness.”

During this time, members of the LGBTQIA+ community often encountered hostile environments. This included businesses in New York City where gay men and lesbians were “not served alcohol in public due to liquor laws that considered the gathering of homosexuals to be “disorderly,’” according to the History Channel’s website (history.com). “In fear of being shut down by authorities, bartenders would deny drinks to patrons suspected of being gay or kick them out altogether; others would serve them drinks but force them to sit facing away from other customers to prevent them from socializing.”

MSNY members decided to take action. Led by Dick Leitsch, who was the group’s president from 1965 to 1969 and an openly gay journalist and former bartender, MSNY chose to hold a number of ‘sip-in’ demonstrations. Equivalent to the era’s civil rights ‘sit-ins,’ MSNY “visited taverns, declared themselves gay, and waited to be turned away so they could sue,” notes history.com. In 1966, the group was  “denied service at the Greenwich Village tavern Julius’, resulting in much publicity and the quick reversal of the anti-gay liquor laws.”

By 1968, however, MNSY and DOB had moved out of their offices in the St. James Building, and within two decades, both organizations would cease to exist. Internal feuds, lack of funds, and diminishing support from the public, who now saw MSNY as “too timid, passive and ‘square’ after Stonewall,” reportedly brought an end to the New York City chapter in 1987. A decade earlier, DOB’s national organization also reportedly closed its doors due to conflicting views about their future direction, which included whether to align itself with gay men’s groups or lesbian separatist feminists. Some local DOB chapters were able to stay active for several more years.

But, to this day, the actions initiated by MSNY and DOB activists of the Flatiron District still remain memorable milestones for the LGBTQIA+ community and others. Shortly before his death at the age of 83 in 2018, Dick Leitsch received a letter of appreciation from President Barack Obama, reported The New York Times in their obituary about the gay rights advocate. “Thank you for your decades of work to help drive our nation forward on the path toward L.G.B.T. equality,” the President wrote to Leitsch. “Our journey as a nation depends, as it always has, on the collective and persistent efforts of people like you.”