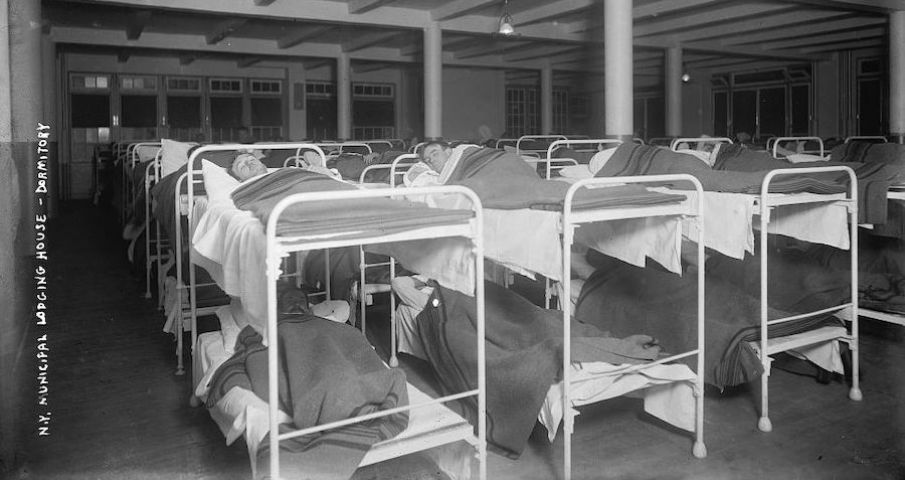 As part of our Discover Flatiron series about New York resiliency and in observance of National Hunger Awareness Day on June 7th, the Flatiron Partnership recalls the 1909 opening of the Municipal Lodging House located at 432-438 East 25th Street. The property once served as the first-ever temporary housing facility in Manhattan that provided food and shelter to the City’s neediest for 40 years.

For decades, New Yorkers have been known to come to the aid of others. Such actions included those taken by a Flatiron neighborhood native, Theodore Roosevelt, who played an integral role in the development of the Municipal Lodging House for homeless men, women, and children.

Starting in the 1870s, an abundance of wealth flourished during the period known as the Gilded Age, which showcased some of the most expansive and expensive real estate in Madison Square and beyond. But, the era of success was soon marred by an economic depression like no other with the arrival of the Panic of 1893. According to the History Channel, “it was wealthy tycoons, not politicians, who inconspicuously held the most political power during the Gilded Age” and soon “banks and other businesses folded, and the stock market plunged, leaving millions unemployed, homeless, and hungry.”

Roosevelt’s roots in Progressivism had long been established before he took the Presidency in 1901. He had served as Commissioner of New York City’s Police Department from 1895 to 1897. During this time, Roosevelt embraced the philosophies of his friend, Jacob Riis, a housing reform activist and reporter, to establish a temporary housing shelter (Rediscovering Jacob Riis). Roosevelt responded to the Riis book, How the Other Half Lives, by telling the author personally: “I have read your book, and I have come to help”.

Thus, the economic downturn during the late 1800s led to the 1896 opening of the first Municipal Lodging House, which was operated by the New York City Department of Welfare. Situated on East 23rd Street and First Avenue, the facility later relocated to a newly constructed and much larger venue on East 25th Street, between First Avenue and the East River. 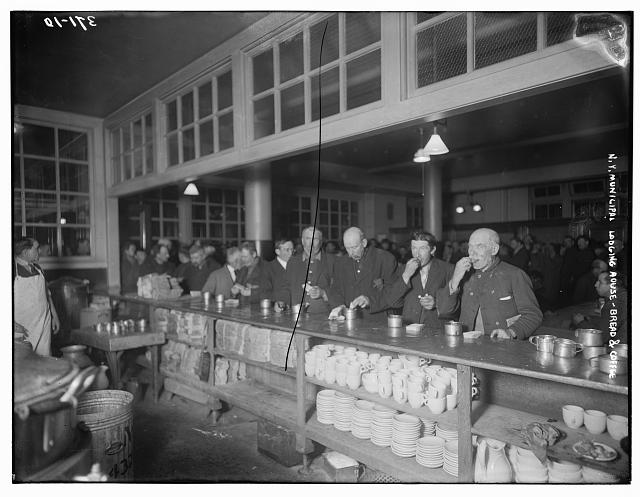 When the newly constructed lodging house opened on February 20, 1909, the reported $400,000, the six-story structure featured a disinfecting plant for occupants’ garments, as well as “964 beds–800 iron bunks for men on three floors,” noted The New York Times in 1991. “The rest were for women and children. Three meals a day were served and, to screen out idlers, men had to work five hours a day in a stone yard.” Dorothy Laager Miller adds, women lodgers “were provided a sewing machine for their use and a laundry room where they could wash their own clothes if they wanted to” (New York City in the Great Depression: Sheltering the Homeless). Reportedly, 426 men and 29 women, of whom 20 had children, entered the building on that wintry Saturday evening.

“Talk to the men who come in to dine on the city’s bread and coffee and sleep in the city’s white enameled beds, you’ll find a strange family resemblance in all their stories,” reported The Evening World newspaper on February 22, 1909.

According to The New York Times, “Official reports painted a fairly rosy picture of the lodging house with minimum concerns,” but also featured an incident with a man “who was arrested three times for vagrancy and who organized a boycott in 1910”. In his opinion, the facility was “not fit for a dog. We can’t get to bed there until 1 in the morning, and we have to get up at 4 and then do five hours of work for three hours of sleep.”

The 1910 census recorded that the Municipal Lodging House had a total of 236 residents. But, by 1914, the facility “experienced its first overflow and by 1932, two piers had been renovated to bring the total capacity to 4,500,” reported The Times during the depth of the Great Depression. A new chapter about the building’s survival, however, was soon-to-be written.

After confronting the challenges of the influenza pandemic of 1918, as well as an end to the Great Depression in 1941 and the conclusion of World War II in 1945, the Municipal Lodging House was decidedly demolished in 1949 to make way for a healthcare complex that would now serve the needs of future generations. Today, the buildings include the Manhattan VA Medical Center and the Hunter-Bellevue School of Nursing, the flagship nursing school of The City University of New York. “It seems strange that the Municipal Lodging House had such a short life, from 1909 to 1949,” recalled The New York Times on December 22, 1991. “What seems even stranger is that it remains an absolutely singular event in the building history of Manhattan.”