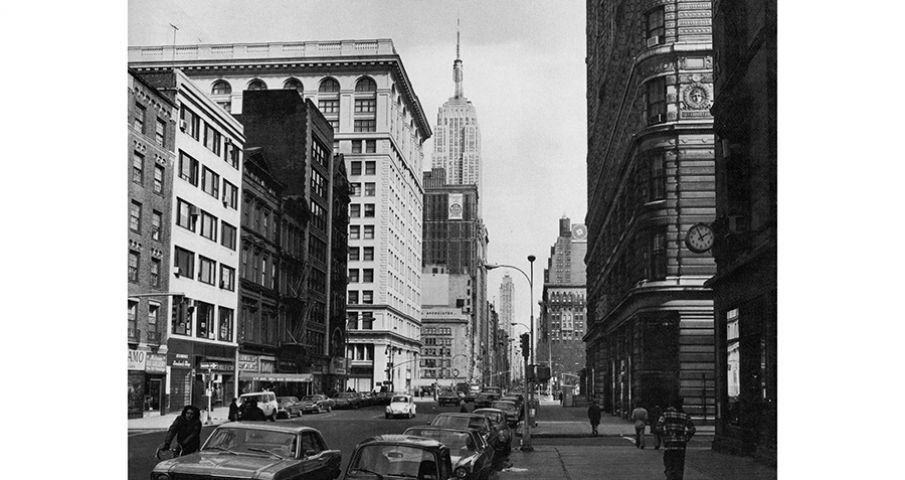 Once upon a time, a century ago and more, visitors to Madison Square could stroll along 24th Street between Fifth and Sixth Avenues and dine sumptuously, sometimes at relatively little cost.

They might choose the splendid dining room at the Fifth Avenue Hotel, where they could mingle with moguls and millionaires, power brokers and playgoers (part of the hotel was the site of the Madison Square Theater, where a long-running musical called “A Trip to Chinatown” introduced “The Bowery,” a ditty that became a classic) . . . if they favored mingling with British travelers and American actors, they might be admitted to the Albemarle Hotel on the north side of 24th and Fifth and sample that hostelry’s cuisine . . . or they could request a table at places like Carlos at 25 West 24th (lunch, 55 cents; table d’hôte dinner, 75 cents), or Colaizzi’s at 37 West 24th (“most celebrated Italian restaurant”) or the Lion d’Or at 59 West 24th (French table d’hôte dinner, 65 cents).

But that was long ago, and for most of the 20th century, the street retreated into the shadows of loft buildings and remained deserted after dark. Slowly, however, things changed. Dramatically. The hotels are gone and so is the Madison Square Theater, but there is a block association and a residential presence. What’s more, the visitors are back and 24th Street is once again a destination. The attraction? A lineup of eating places that have transformed the block into a budding Restaurant Row, an international one at that.

Anchoring the eastern end of the block, Eataly, a 50,000-square-foot market and a quintet of restaurants, is what has been described as a circus maximus of Italian food. On 24th Street, one can also dine on South American fare such as Nuela’s smoked Peruvian chicken or cochinillo, roasted suckling pig . . . or try a taste of Thailand at Boyd Thai II by ordering soft-shell crabs with Thai morning glory in Panang curry sauce, served with coconut rice . . . or satisfy an urge for Japanese food with sushi and sashimi, also at Boyd Thai II . . . or visit San Rocco, where the furniture, fixtures and cutlery are imported from Italy and where the menu offers such mouthfuls as Scialatielli al frutti di mare con bisque di gamberi (hand-made pasta from Amalfi with mussels, clams and shrimps in a gravy bisque) or Agnello con patate saltate al forno al profumo di olio al tartufo (oven-roasted lamb with sautéed potatoes with truffle olive oil) . . . or check out the newest addition to the block, Junoon, opening this month and featuring refined and modern Indian cooking from Executive Chef Vikas Khanna in a lush new setting.

At least one more restaurant is currently under construction. It will be the fifth in a chain of Manhattan pizzerias specializing in thin-crust pies and bearing names reminiscent of the Marx Brothers. Instead of Groucho, Chico, Harpo, Gummo and Zeppo, the pizza parlors are called Gruppo, Posto, Vezzo, Spunto, and now, Tappo, which is expected to open on 24th Street early next year. Operated by Antonio Gomez and Jon Tweedy, Tappo — like the others in the chain — will feature pizzas with a choice of more than three dozen toppings.

In addition, there are reports of a steakhouse that might move into the space last occupied by Ottimo, an Italian restaurant at 6 West 24th Street that closed earlier this year. Stay tuned.