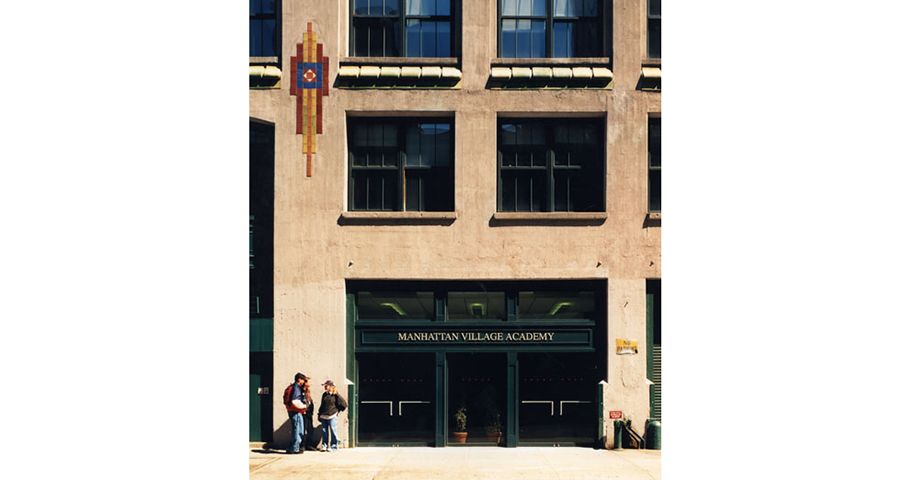 With more than one million NYC’s students settled into the routine of another public school year, we take a look back at the site of today’s Manhattan Village Academy, at 43 West 22nd Street between Fifth and Sixth Avenues in Flatiron. The Academy features a progressive college preparatory program for grades 9 through 12, as well as a two-decade tradition as “a liberal arts school committed to academic excellence.”

According to the 1989 Ladies’ Mile Historic District Designation Report Vol. 2, built between 1925 and 1926, the property was initially constructed as a 13-story Art Deco industrial building designed by Russel Cory of Cory & Cory, a firm owned with his younger brother Walter. The building was commissioned as a bakery and factory for the Frank G. Shattuck Company. Prior to this and dating back to the mid-1850s, this block of West 22nd Street and the surrounding area had been the site of residential brownstones.

Russel Cory was known for emphasizing vertical articulation with colorful tiles; the “vertical street” type industrial structure is credited to him.  Cory & Cory was also the architect for the block-long Starrett-Leigh Building, a designated New York City landmark completed in 1931 and located in the nearby Manhattan neighborhood of Chelsea.

Between 1954 and 1956, a 10-story addition, designed by Walter Cory, further expanded the building which allowed for the inclusion of business offices and a food processing plant, as well as an air conditioning system. As recorded in the Designation Report, Walter Cory noted that the design of the system within the interior columns “constitute[d] a definite step forward in air conditioned structures.”

The next innovative turn for the commercial property happened four decades later when architect Beverly Willis took a mere nine months to redesign and renovate designated loft space in the building for an educational facility to be known as Manhattan Village Academy. “Located on the second and third floors, the classrooms ring enormous open-plan spaces, each furnished with lightweight tables and chairs,” reports the Beverly Willis Architecture Foundation website about the makeover prototype. “Willis designed a contemporary entrance that enhanced the existing concrete structure. The existing cream-colored façade glows warmly against the Willis-designed dark-green door and window frames. Muted gold letters quietly glimmer atop the glass entry. Original red, orange, yellow, and blue tiles, shiny and rectilinear, furnish the exterior with an Art Deco trim.”

Willis’ open space creation became a popular concept among many and went on to be a prototype for New York’s small school design.  When the Academy opened for classes the first time in 1994, then principal Mary Butz proudly shared with Metropolis Magazine her words of a mission accomplished: “You can see what your kids are doing at all times.”