With its eight 1930s-era interior murals depicting various New York neighborhoods and an exterior panel of five bronze sculpture reliefs (a work of art that projects from the wall it belongs to), the Madison Square Post Office gained a coveted spot on the National Register of Historic Places in 1989. To celebrate the property’s 30-year-old designation anniversary and its official opening on September 20, 1937, at 149-153 East 23rd Street, between Lexington and Third Avenues, the Flatiron/23rd Street Partnership takes a look back at the Classical-style structure.

Created by Lorimer Rich, the American architect best known for the design of the Tomb of the Unknown Soldier in Arlington National Cemetery, New York’s Madison Square Post Office would reportedly become the most important post office in the city when it made its debut 82 years ago. The new Madison Square Post Office was actually a replacement branch that shared the same name as its predecessor, which had been located at 122 East 23rd Street. “In response to this growing concern over inadequate facilities, a new federal policy for constructing buildings ‘exclusively for post office purposes’ was established early in the twentieth century,” according to a National Register of Historic Places report issued by the United States Department of the Interior in 1988. 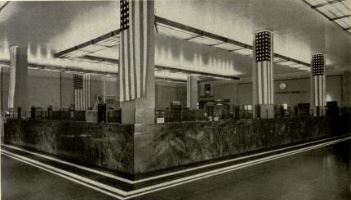 The designated site for the proposed post office had been acquired for a reported $379,693 and the building’s total construction cost would be $495,581, wrote C.W. Short and R. Stanley Brown via Public Buildings. When the three-story, 80,000 square feet, state-of-the-art post office opened for business, it was the first branch to resemble a banking institution with its décor. “An interesting feature of the lobby is the ‘bank screen’ treatment of the counters, the lobby, and workroom all being one room and not separated by a partition as is usual,” noted C.W. Short and R. Stanley Brown in their book Public Buildings. The facility was well-received by neighborhood retail owners and its publicity gained press coverage. In attendance at the opening day ceremony were Postmaster Albert Goldman along with “several members of the Twenty-Third Street Association and representatives of large wholesale houses in the district,” reported The New York Times on September 21, 1937. 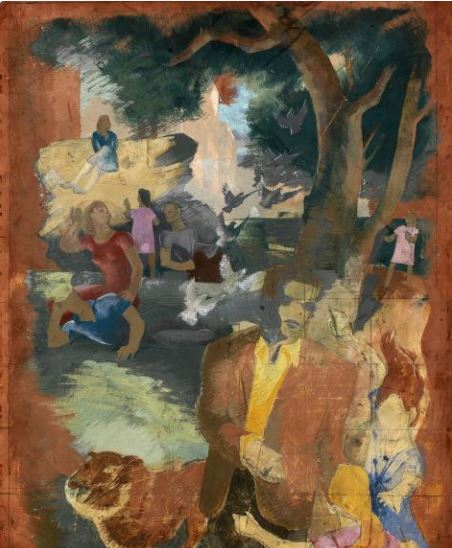 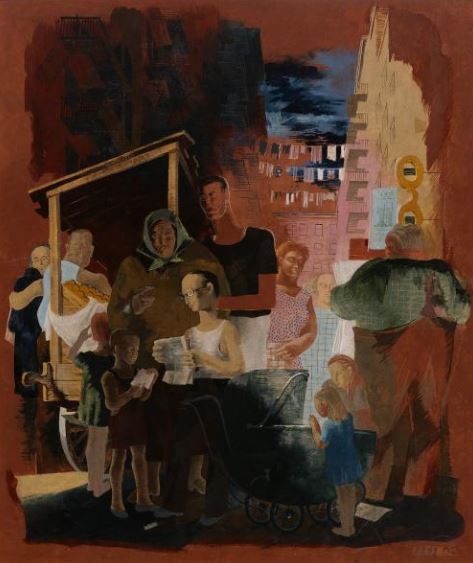 According to The Encyclopedia of New York City: Second Edition edited by Kenneth T. Jackson, Lisa Keller, and Nancy Flood, “A few post offices in the city were designed in the austere Modern Classical style that became popular for public buildings during the 1930s, including the Madison Square Station. The Treasury [Department] also commissioned works of art for 10 of the new buildings,” which included “eight murals with urban street scenes by Kindred McLeary” that would feature images by the artist ranging from Central Park to Wall Street to the Lower East Side for display in the Madison Square Post Office. The five exterior bronze façade reliefs were designed by sculptors Edmond Amateis and Louis Slobodkin.

The Smithsonian National Postal Museum website says that “post offices built in the 1930s during [President Franklin Delano] Roosevelt’s New Deal were decorated with enduring images of the ‘American scene.’ In the 1930s, as America continued to struggle with the effects of the depression, the federal government searched for solutions to provide work for all Americans, including artists. During this time, government-created agencies supported the arts in unprecedented ways. As Harry Hopkins, Roosevelt’s relief administrator said in response to criticism of federal support for the arts, “[artists] have got to eat just like other people.”

Adds the Smithsonian website, “Often mistaken for WPA art [the public works sponsored arts project known as Works Progress Administration and later renamed Work Projects Administration], post office murals were actually executed by artists working for the Section of Fine Arts. Commonly known as ‘the Section,’ it was established in 1934 and administered by the Procurement Division of the Treasury Department. By providing decoration in public buildings, the art was made accessible to all people. Artists working for the Section were not chosen on the basis of need, but through anonymous competitions where the national jurors were often other artists.”

Following its 1937 debut, the new Madison Square Post Office would soon become “the most important postal station in New York City,” according to C.W. Short and R. Stanley Brown in Public Buildings. And it was during this period that this post office location would begin to generate “annual postal receipts of approximately $5,000,000, and a daily handing of 1,000,000 letters and 2,500 sacks of outgoing parcel-post mail.” Today, the Madison Square Post Office remains a travel-pick destination, according to Reuters list of unique post offices around the world, which cites that the “murals by Kindred McLeary make this post office a must-see.”