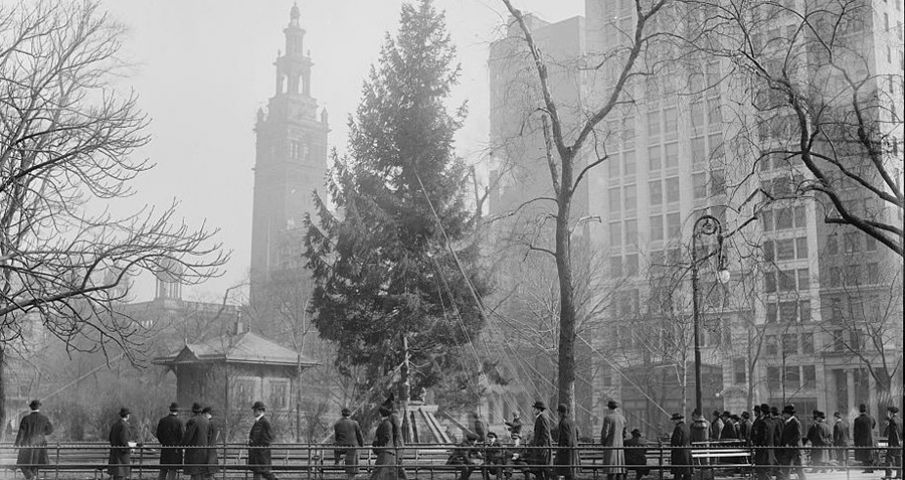 Its reported arrival by railroad from New York State’s Adirondack region was made “to cheer up the lonely and the destitute.” And, for one woman, who hobbled along on crutches, the 63-foot Balsam fir had “the Almighty put snow on the tree to make it prosper.” Such were the holiday sentiments among many city residents when America’s first community Christmas tree debuted in Flatiron’s Madison Square Park a century ago.

“In 1912, Madison Square Park hosted the nation’s first public tree lighting in hopes that the ceremony would become a location where the rich and poor could gather,” explains Debbie Landau, President of the Madison Square Park Conservancy, the non-profit organization that is also celebrating its 10th year of supporting and maintaining the seven-acre location between 23rd and 26th Streets, from Fifth to Madison Avenues. “Traditions came and went over the years but one thing is certain, the public tree lighting remains an American symbol of holiday cheer and goodwill.”

On Tuesday, December 4th from 3:30 p.m. to 5:30 p.m., the Madison Square Park Conservancy, with support from the Flatiron/23rd Street Partnership, Marimekko, Hill Country Barbecue Market, and the New York City Department of Parks and Recreation, will sponsor a centennial celebration of the tree’s lighting in the park’s Northern Plaza. Notes Landau about this year’s 35-foot Balsam fir that will be lit at approximately 4:55 p.m., “We were inspired by vintage Christmas tree decor from the turn of the 20th century, lots of metallic! This year’s color scheme will be comprised of shades of blue, white, and silver. Nice and frosty! We will also bring back a tree topper to commemorate The Star of Hope, now located at the southern end of the park.”

In addition, says Landau, there will be a number of festive activities, including a crafts tent for children and another one to feature historic facts about Madison Square Park and the tree lighting ceremony, as well as holiday music provided by The New York Life Singers and Audra Rox, and cookies, Texas sheet cake and hot apple cider, courtesy of Hill Country Barbecue Market. “We normally expect about 1,000 people for the ceremony,” declares Landau, “and the tree will be on view through the New Year, lit each day from dusk till the park’s close at approximately 11:30 p.m.”

The concept of a community “Tree of Light” was a European-inspired idea reportedly launched in 1911 by Upper West Side resident Emilie D. Lee Herreshoff, a socialite and the wife of prominent chemical scientist and yachtsman J.B. Francis Herreshoff.  She had proposed the plan to then Mayor William Jay Gaynor, according to Richard W. O’Donnell’s 2012 article “The Lighting of the First Community Tree” published in Arbor News by the Cassity Tree Service.  Herreshoff’s initial request was denied, but later granted in 1912.

It was that Christmas Eve, noted O’Donnell, that Herreshoff flicked the switch and made history when “a faint glow appeared at the very top of the tree, expanding and increasing in intensity until a 10-inch star gleamed brightly against the deep, dark blue of the night sky.” After that, “many-colored fire leaped along one show laden branch after another in a blaze of green, blue, white and red lights.”

The tree would go on to be a beloved topic of coverage throughout the decades. On Christmas Day 1920, The New York Times described the then 65-foot tree, which featured 5,000 electric candles, as “big enough for the heart of Manhattan” and “could be seen for more than two miles along the highways converging at the park.”

The 1942 Christmas season, according to published reports, was under “strict wartime dimout regulations” because the nation’s coastal businesses and residences were asked to turn off their lights one half hour after sunset to avoid possible enemy air attacks during World War II. But for the Madison Square Park area, the lack of light didn’t keep visitors away from singing carols and celebrating the season around the downsized tree.

This year’s milestone event, however, marks a much brighter occasion. “We all take a real sense of pride in creating not only this joyous event for the neighborhood,” explains Laudau of the Conservancy’s role, “but also continuing this tradition of bringing the community together to celebrate the season.” And for Landau, the Flatiron area is one in which “the historic significance of the district coupled with its current renaissance makes it a pulsating destination in the heart of New York City, as it once was in the 1900s. The neighborhood continues to be a mecca for culture, cuisine, and commerce.”

Photo via the Bowery Boys.