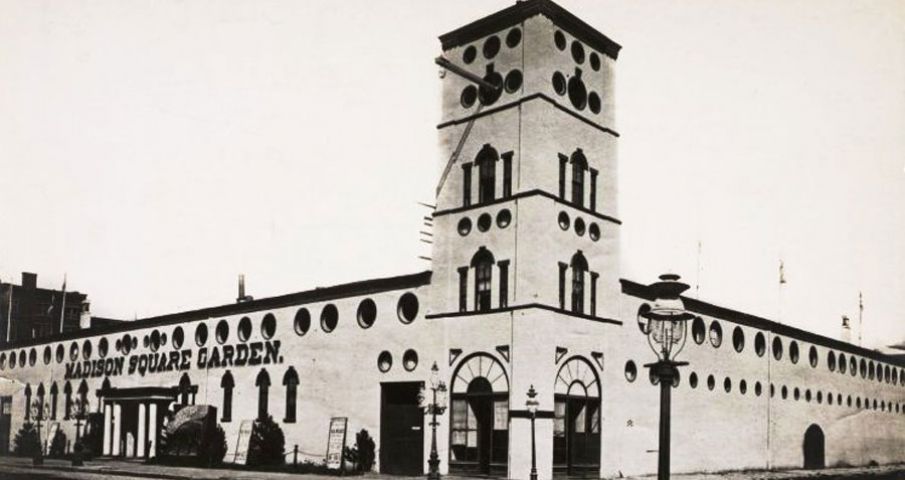 The original Madison Square Garden was born, appropriately enough, just a whisper away from Madison Square. The site on which it stood had been the southern terminus of the New York and Harlem Railroad, filling the entire block between Madison Avenue and Fourth Avenue (now Park Avenue South), from 26th to 27th Streets. In 1873, Cornelius Vanderbilt, who owned the railroad, leased the depot to the legendary Phineas Taylor Barnum, who tore down most of the old building, transformed what was left into an amphitheater and called it the “Monster Classical and Geological Hippodrome.” Beneath a tent that accommodated 15,000, he presented extravaganzas that ranged from chariot races to waltzing elephants.

Barnum closed down on Feb. 27, 1875, and the space was leased to Patrick Gilmore, a bandleader and showman who converted it into a spectacular space bursting with fountains, statues and exotic plants. He called it Gilmore’s Garden. In 1877, the waltzing elephants were replaced by prancing poodles, as Gilmore presented the first Westminster Kennel Club Show. For the next couple of years, there were concerts on summer evenings, horticultural exhibitions, charity balls – and walking races, a portent of things to come.

In 1879, Gilmore’s lease expired and on May 22, The New York Times reported that after extensive renovations and at the request of the Vanderbilts, “Gilmore’s Garden will hereafter be known as the ‘Madison-Square Garden.’” Together with its original hyphen, it made its public debut nine days later with a concert by a 60-piece band.

The Garden popped with pop culture, programs “suited to the demand of most pleasure-seekers in Summer, who do not wish to be called on for any serious mental effort while taking their amusements,” said The Times.

What followed were flower shows; wrestling matches between such stalwarts as Edwin Bibby, the champion of England, and Andre Cristol, “the Tiger of the Pyrenees”; billiard contests; political rallies; and an exhibition of “fine American-bred Durham cattle and fancy sheep.”

There were also six-day “pedestrian competitions,” international race-walking events that drew capacity crowds of 10,000 around the clock, but the Garden was best known as a venue for bicycle races. MSG’s position as the nation’s preeminent racing arena gave rise to a form of team cycling called “the Madison,” which even today is part of the Olympic Games.

The original Garden was razed in 1889. It was replaced on the same site by MSG II, a magnificent Moorish-influenced building designed by Stanford White. It opened on June 6, 1890 at a cost of $3 million. It was distinguished by a 32-story tower that looked like a minaret, topped by a statue of a fetching Diana the Huntress, wielding a bow and arrow and serving as a weather vane. It was reportedly the country’s first nude sculpture in a public place. Diana was created by Augustus Saint-Gaudens, whose body of work includes a fully clothed Admiral David Farragut in Madison Square Park.

In addition to the arena, the Garden boasted a theater, concert hall, swimming pool, shopping arcade and meeting hall. There was also an ornate rooftop restaurant and it was there that White – a notorious womanizer – paid with his life for his earlier dalliances with a teenage model/actress named Florence Evelyn Nesbit, who had gone on to marry the millionaire Harry Thaw. On the night of June 25, 1906, Thaw, seething with jealousy, approached White during a performance of the musical “Mam’zelle Champagne” and shot him to death as the cast was singing “I Could Love a Million Girls.” It was White’s requiem.

In its 35 years of existence, MSG II was one of New York’s premier showcases, housing dog and pony shows, political conventions, circuses, society balls and sporting events. In 1908, it was sold to a real estate firm with a mortgage secured by the New York Life Insurance Co., and it closed on May 5, 1925. Its third incarnation bowed the followed November on Eighth Avenue, between 49th and 50th Streets. In 1968, the Garden moved south to its present location, the Penn Plaza complex. After MSG II was razed, New York Life asked architect Cass Gilbert to design a new headquarters building on the site of the original Garden. It was completed in 1928. Although the waltzing elephants and the six-day cyclists are long gone, some vestiges of showmanship remain in the mammoth limestone skyscraper: 72 gargoyles and a great golden pyramid. Barnum would be beaming.

Image via The Bowery Boys