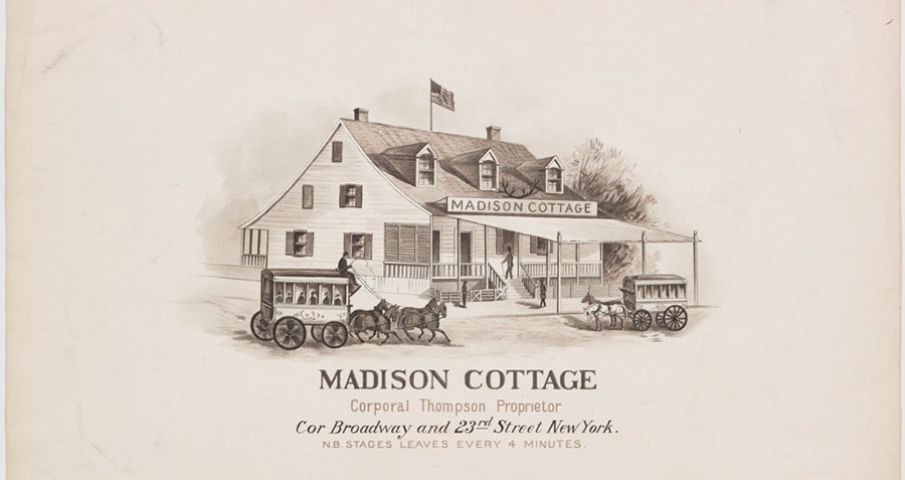 It’s July and time for a summer getaway! In recognition of this time-honored New York tradition, the Flatiron/23rd Street Partnership takes a journey back to the 1839 opening of the popular inn, Madison Cottage, at the corner of 23rd Street and Broadway.

Much of the Flatiron District was still farmland during the late 18th and early 19th centuries. Neighborhood landowners included wagon-and-wheel-maker John Horn, who owned property between 21st and 23rd Streets. Horn was also the proprietor of one of the area’s first pubs, Buck Horn Tavern, at 22nd Street and Broadway. The Tavern was where General, and future first U.S. President, George Washington reportedly met with the public in 1783.

A half century later, one of Horn’s grandchildren, Margaret, and her husband Christopher Mildeberger, were in the midst of seeking a new site for their Fifth Avenue farmhouse, since the major thoroughfare where the property stood was undergoing a northbound extension. By 1839, their home would not only find a new location, but also a new direction as a commercial property at the corner of Broadway and 23rd Street.

That year the farmhouse was leased to a gentleman known as Corporal Thompson, who then transformed the building into a roadhouse. It was called Madison Cottage, a name chosen by Thompson in tribute to James Madison, the fourth President of the United States.

“This converted yellow farmhouse was for many the first stop leaving the city or the last stop before entering the city proper,” according to the Museum of the City of New York’s website. “It served as a post-tavern, stage coach stop, a cattle exhibition hall, and the de facto congregating point for horse-racing enthusiasts among young men of the upper class.”

Henry Collins Brown, author of Glimpses of Old New York, wrote that the cottage “was also the starting place of several stage lines that ran to the lower part of the city and notwithstanding its diminutive size from present day proportions it was a very important and well-known establishment.”

The inn’s entranceway had “a huge pair of antlers cast their shadow over its door,” reported Harper’s Weekly on January 7, 1893, “and under that shadow passed every knight of the whip whose throat was parched by the dust of the road.”

Many Madison Cottage guests were “codgers, young and old,” revealed  Abram C. Dayton in Last Days of Knickerbocker Life in New York.“Scores of bon vivants would end their ride for the day by “smiling” with the worthy Corporal, and wash down any of their former improprieties with a sip of his ne plus ultra, which was always kept in reserve for a special nightcap.”

The inn’s perks were also publicized in newspaper ads. One announcement appeared in The New York Herald on May 9, 1847: “Madison Cottage–This beautiful place of resort opposite Madison Square, corner of Twenty-third Street and Broadway, is open for the season, and Palmer’s omnibuses drive to the door. It is one of the most agreeable spots for an afternoon’s lounge in the suburbs of our city. Go and see.”

An evening stay at the cottage cost four pence for a bed and six pence with supper, noted Miriam Berman, author of Madison Square: The Park and Its Celebrated Landmarks. In addition, said Berman, there were a number of house rules for overnight guests, which included: “No more than five to sleep in one bed. No boots to be worn in bed. No dogs allowed upstairs.”

In 1852, Madison Cottage closed to accommodate the arrival of the amusement arena Franconi’s Hippodrome in 1853, followed by the Fifth Avenue Hotel in 1909.

Photo Credit: Museum of the City of New York