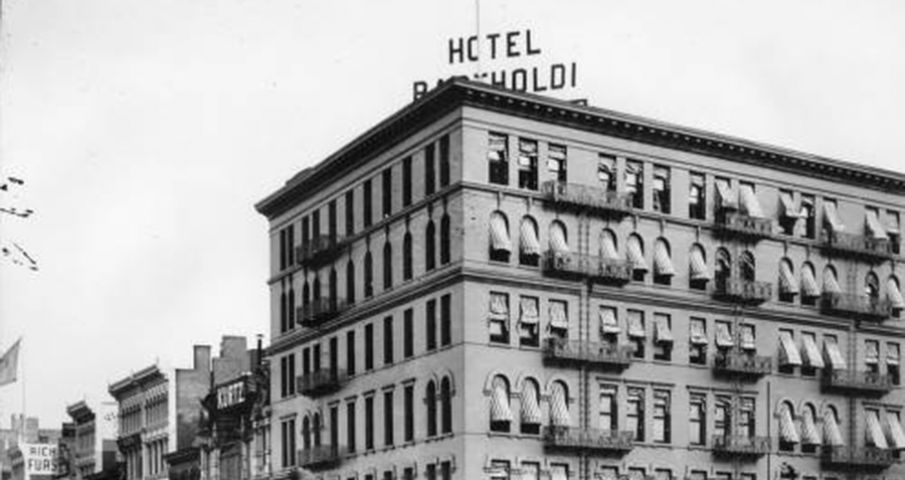 World champ British boxer Bob Fitzsimmons declared it a haven for his pet lion cub to roam. And the roar of local politics could also be heard in the several campaign rooms occupied by New York City Mayor George McClellan’s re-election team in 1905. But for many guests at the Hotel Bartholdi, which was located at the southeast corner of 23rd Street and Broadway, a stay there reflected one of their frequent print ads: “A cozy, home-like little hotel that will appeal to the hearts of those who are looking for solid comfort. Good, plain American cooking and affable and courteous treatment.”

The seven-story hotel’s road to hospitality began in 1885 with its name to honor and promote an anticipated visit by the French artist Frédéric-Auguste Bartholdi, sculptor of the Statue of Liberty. The arm with Lady Liberty’s torch was on display in nearby Madison Square Park to raise funds for her completion. But reasons unknown, Bartholdi headed to Hoffman House, a palatial upscale neighboring hotel.

More of a home, however, to athletes, Hotel Bartholdi visitors often included an eclectic group of high-profile sportsmen such as champion cyclist Teddy Hale, baseball league umpire Tim Hurst and pugilists Chappie Moran, Kid McCoy and fellow fighter Fitzsimmons, who also made headlines when he reportedly “caned a waiter” after chasing the hotel employee with a stick for intentionally slamming  the door to a room where the boxer’s sick child was asleep.

One of the hotel’s favored amenities was a bird’s-eye view city tour offered by the Green Car Sight Seeing Service. The open-top motor coach caravan (see image below), which averaged a dozen or so riders, traveled either 13 miles uptown or downtown for two hours at the price of $1 each customer.

The Flatiron’s first-rate hotel district, however, was beginning to show signs of a changing business climate. And with escalating legal and financial issues, the Hotel Bartholdi shut its doors in 1912.  For the next several decades, the building underwent a series of renovations and new businesses would thrive there such as the first Nedick’s storefront, the landmark fast-food chain famous for its signature orange drink, founded by Robert T. Neely and Orville A. Dickinson.

However, in 1966, a five-alarm fire would destroy the building and surrounding properties and also kill 12 firefighters. New York City Mayor John Lindsay, who declared the Fire Department’s tragedy “an absolute nightmare,” ordered all flags in the city at half staff to honor the loss of the men also known as New York’s bravest.

The remaining real estate was subsequently demolished and later became the site for what is now known as Madison Green, a 31-story, residential luxury condominium built in 1982, seven decades after the closing of the once “cozy, home-like little hotel” known as the Hotel Bartholdi.