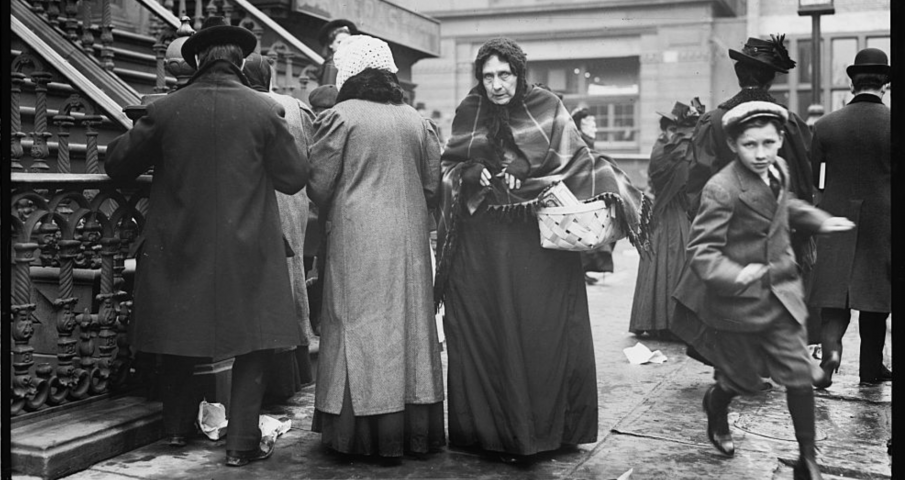 In this season of giving, the Flatiron Partnership shares notable highlights from the 1899 Christmas Day dinner for New York City’s neediest residents. The event was then known as the largest holiday feast ever held at the former Madison Square Garden on 26th Street and Madison Avenue.

During the final decade of the 19th century, New York grappled with financial challenges created by the nation’s economic downturn in 1893. And although the country’s wealth may have been bolstered by 1898’s Spanish-American War, where Flatiron native Theodore Roosevelt served as lieutenant colonel of the “Rough Riders” regiment, nevertheless, many New Yorkers faced misfortunes including food insecurity.

A hearty holiday meal proved to be a welcomed gift of hope for thousands when the Salvation Army presented a feast for the City’s neediest on Christmas Day 1899. The Garden dinner hosted by the global charitable organization was arranged to feed nearly 25,000 men, women, and children.

Expenses for the event included public donations deposited in the Salvation Army’s red kettle pots on the corners of city streets. These pots swung “from a tripod bearing a placard setting forth the plans for the Christmas feast,” according to The New York Times on December 26, 1899, “and closing with the adjuration ‘Keep the pot boiling.’” The Garden gathering reportedly required a total of 10 days of preparation and cost an estimated $7,000. 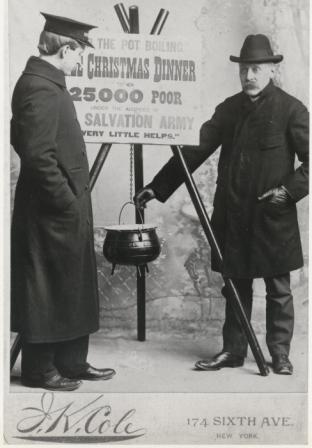 In addition to soliciting funds for the festivities, the planning committee requested cookware contributions. “Crockery and cutlery of all kinds,” as well as “persons having any cups, saucers, knives, forks or spoons to part with–no matter how old they are or what bad shape–to send them to the 26th Street side of Madison Square Garden, where they will find someone to receive them,” wrote the New York Journal on December 18, 1899.

Holiday décor was in full display at the Garden. “The interior of the building was decorated with streamers of holly and wreaths of mistletoe,” noted the New-York Daily Tribune on December 26, 1899. “Over the 26th Street door was a huge silken banner, in which was the season’s greeting, ‘Merry Christmas.’ At the 27th Street entrance was a similar banner, bearing the words ‘Happy New Year.’ At the Madison Avenue door was one which bore the word ‘Welcome,’ and over the Fourth Avenue door (now Park Avenue South) hung the largest banner with the sentence ‘Praise God, from Whom All Blessings Flow.’”

Attendees at the Garden had been prescreened to receive tickets for either the morning food basket distribution or an invitation to the evening meal. Lines of people formed at the building a couple of hours before the morning basket giveaway at 11 a.m. Noted the New-York Daily Tribune, guests “presented their tickets, received their baskets and passed out through the 26th Street door into the street. Fully two-thirds of those who received baskets were women. Although most of the guests of the [Salvation] Army were of the poorest types, they included a large number of men who were warmly and respectably clothed and who obviously had temporarily fallen on hard times.” 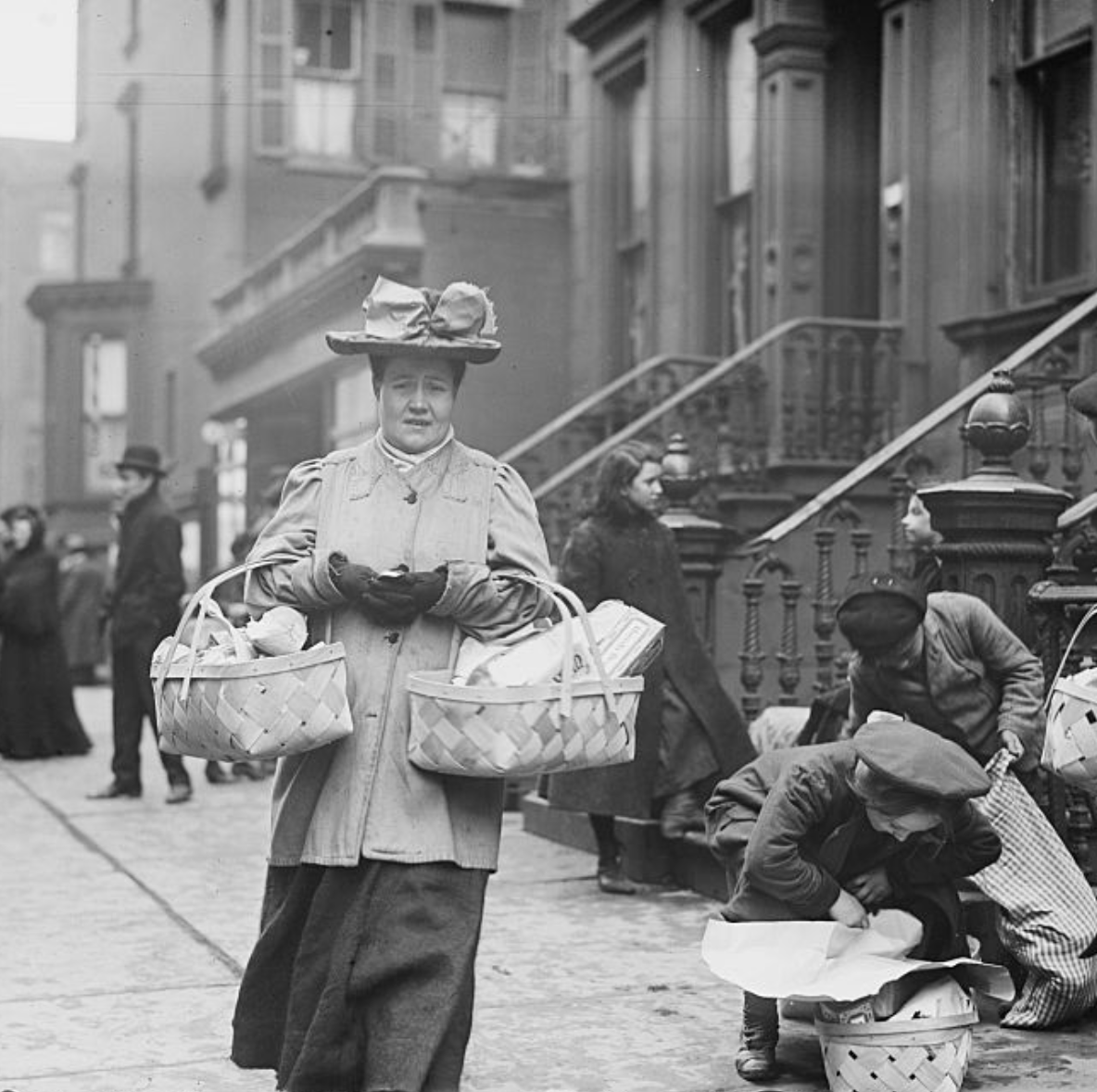 Entrants treated each other with care and kindness, including one notable example published by the New York Journal on December 26, 1899. “One in line was a little, old woman, stooped and blind,” wrote the paper. “She was thinly clad. She felt her way with a small wooden cane. There was no pushing or crowding where she was. An old man behind her discovered she was blind and offered his arm. Others made way so that this pair might not have to wait.” It was also reported that 40 police officers from the neighborhood’s West 30th Street station helped direct guests into the Garden.

Behind-the-scenes, a culinary team of 10 to 20 cooks were roasting, baking, stewing, and boiling food on large range stoves temporarily placed in the venue’s gallery. The holiday menu featured a cornucopia of provisions that included 2,000 pounds of turkey, 5,000 pounds of chicken, 250 geese, 250 ducks, 1,000 pounds of pork and mutton, 1,000 pounds of suckling pig, 125 barrels of potatoes, 100 barrels of mixed vegetables, turnips, carrots, onions, and beets, 10 barrels of cranberries, and 4,000 plum puddings.

“Although the dinner was not served until 6 o’clock, the doors were thrown open soon after 2 o’clock in order that the waiting crowd might not be compelled to spend the intervening time standing in the cold,” wrote the New-York Daily Tribune. “As early as noon they began to arrive, and when at length they were admitted to the Garden they filed quickly and without crushing to seats in the galleries, where they were told to sit until the call for dinner was sounded.” 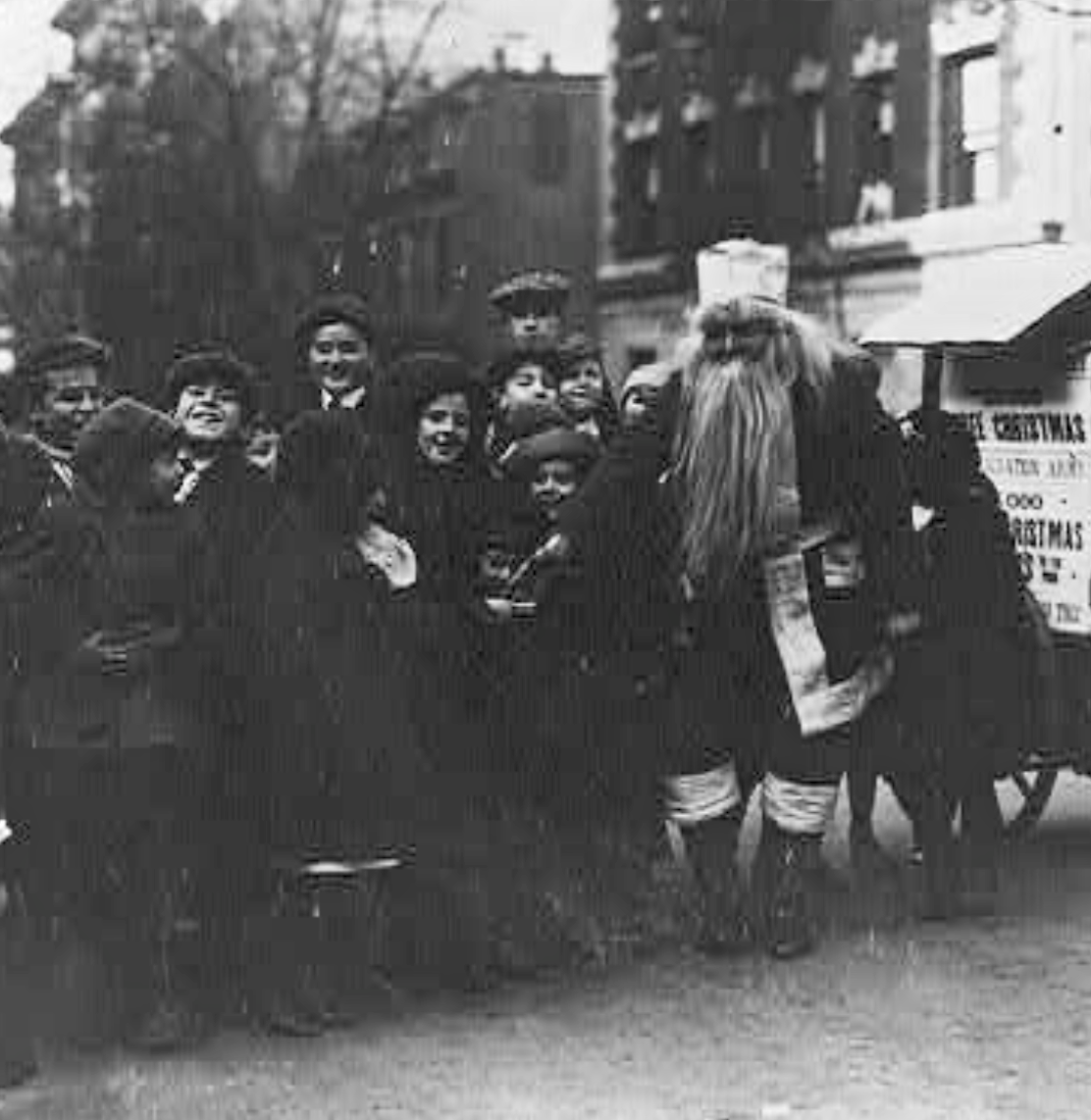 There were 40 long tables, each with 50 chairs, and, noted the New York Journal “at the end of many of the tables there were Christmas trees” and “the scene was warm and bright.” More than 5,000 guests were seated, 2,200 at a time, and waited upon by 300 Salvation Army personnel dressed in their traditional red jackets and high-crowned caps. “Guests were men and women, old, young, middle-aged,” reported the New York Journal. “There was no distinction of color.”

Diners, according to The New York Times, “ate their fill without money and without price. It does not take a hungry person long to eat even a Christmas dinner.” Baskets of food, which contained enough edibles to feed at least five people, were also distributed to those who were unable to attend or stay at the Garden holiday dinner that evening.

Some of the city’s wealthiest, were in attendance. “When the feast was at its height,” wrote The New York Times, “sat many thousands of well-fed and prosperous people, among them many women who had come in carriages and were gorgeously gowned.” The paper also noted the “men in high hats and women in costly wraps, position and fortune forgotten for one brief moment while all sang in unison ‘Praise God, from Whom All Blessings Flow.’”

The publication Dissent also cited in their 2014 magazine article that “a few rich New Yorkers,” who had also paid a dollar fee for admission to the holiday dinner, “descended from the gallery to circulate among the guests, dispensing further charity.”

“In an era of expanding inequality,” Commander Booth-Tucker reportedly told guests, “events such as the Christmas dinner were bridging the gulf between the rich and the poor.” Booth-Tucker later revealed to the crowd a telegram that he had received as a holiday message reply from now New York State Governor Theodore Roosevelt. Wrote the future U.S. President to the Salvation Army Commander: “Hearty thanks. Warm Christmas greeting and good wishes to all.”