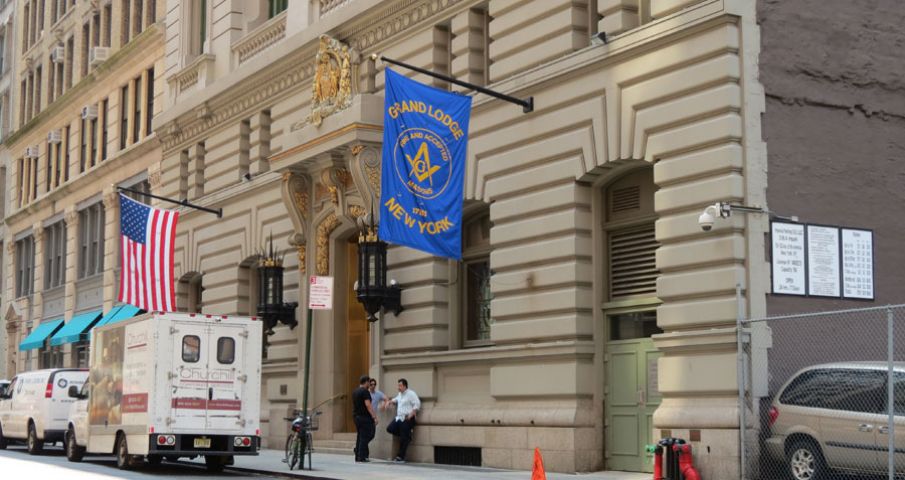 One of New York’s hidden gems, the ornately decorated Grand Lodge of Masons building began offering tours to the public in 2006 as part of the Masons’ efforts to reach out for new members, a project that coincided with the organization’s 225th anniversary.

The 19-story building, at 71 West 23rd Street, was designed by Mason Harry Percy Knowles, built between 1911 and 1913 and restored in the 1980s. Its interior is lavishly appointed and visually stunning: vaulted ceilings, generous application of gold leaf, marble walls, splendid chandeliers, and chairs the size of thrones for high-ranking members.

Framed photographs of celebrated Masons line the hallways and in the Hollender Room, a library-conference room, there is a larger-than-life statue, painted gold, of perhaps the best-known Mason of them all: George Washington, in Masonic regalia.

Members gather in the Grand Lodge Room, a 1,200-seat auditorium, and have use of a dozen two-story elaborately decorated ceremonial meeting rooms. An altar and candles are in the center of each, with two stone blocks — one uncut, the other finished — at one end. Each of the rooms is unique, designed to represent various architectural eras, from Egyptian to Colonial.

The Renaissance Room, which has been called the most beautiful lodge room in the Masonic world and the high point of the restoration project, is graced by murals painted on canvas and placed in arched recesses around the ceiling, as well as by stained glass windows in the style of Louis Comfort Tiffany, ceiling murals and marbleized wall panels.