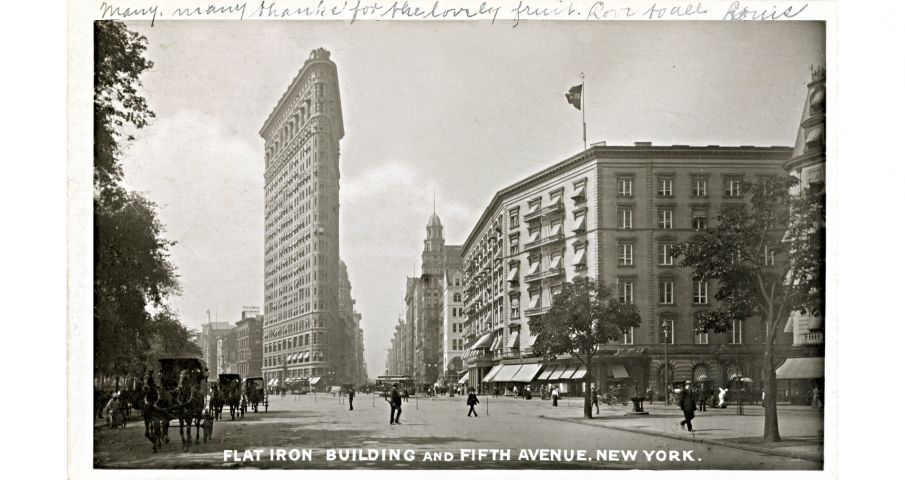 As a part of our “Postcard Preview” series, these historical postcards come to us from the personal collection of Miriam Berman, a local NYC historian who is one of the tour guides for our weekly historic walking tours, which are currently on hold due to COVID-19. Miriam walks us through another of her personal favorites depicting the Flatiron neighborhood.

WHAT SURROUNDED THE FLATIRON BUILDING?
When the Flatiron Building was built in 1902, the famous Fifth Avenue Hotel stood diagonally across the way on Fifth Avenue between West 23rd and 24th Streets. 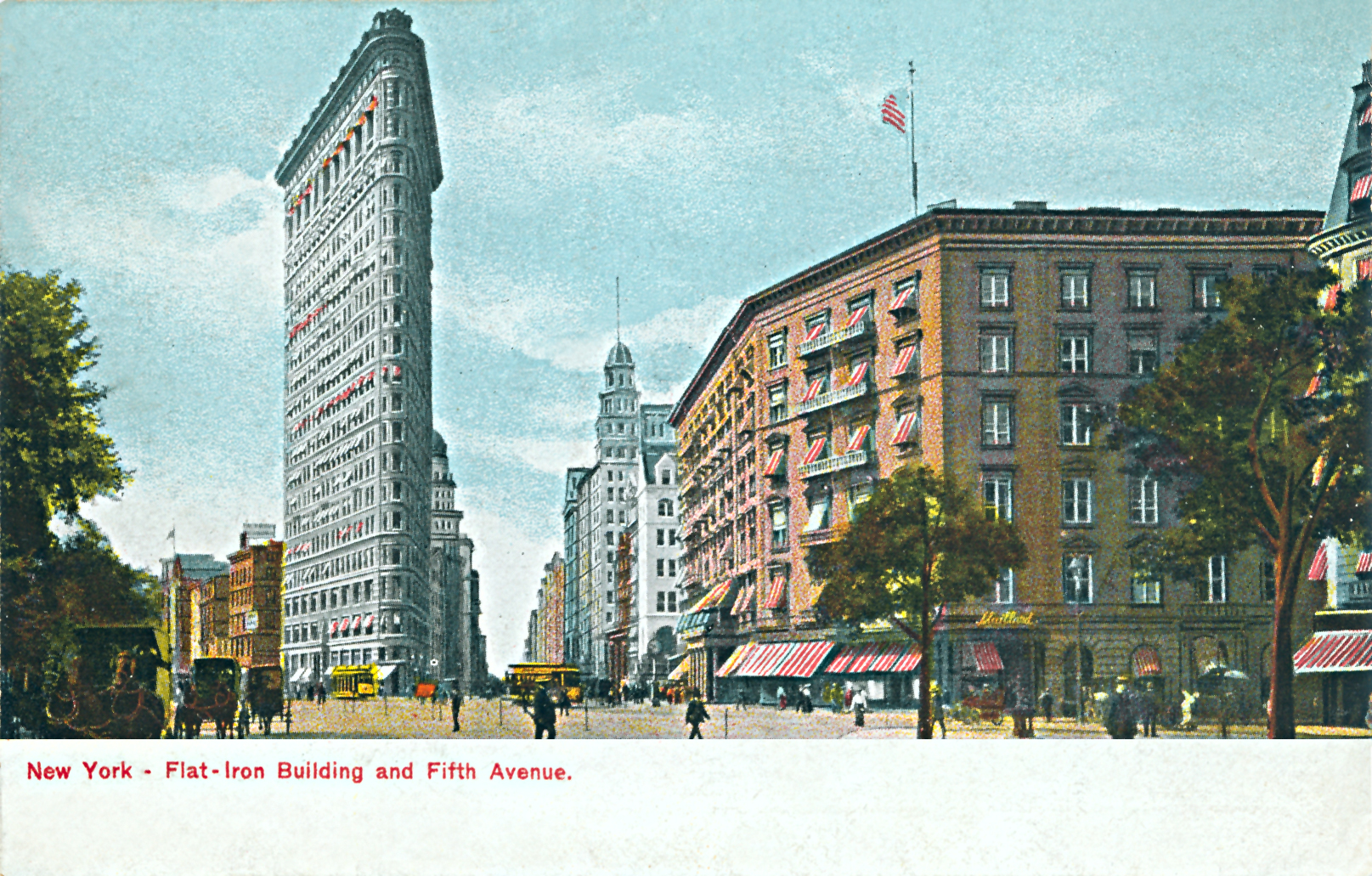 The Fifth Avenue Hotel was dubbed ‘Eno’s Folly’ after the savvy real estate magnate Amos Eno erected the hotel in 1859 – a time when the neighborhood was considered a no-man’s-land. Eno shed the hotel’s negative connotation when he invited the Prince of Wales to be a guest at the hotel during the Prince’s first trip to America in 1860. The publicity of this event attracted the attention of other real estate moguls who followed Eno’s lead and took interest in developing the area. This led to a string of hotels, restaurants, and theatres opening along Broadway. Eno helped successfully lay the foundation for the vibrant district that we enjoy today. 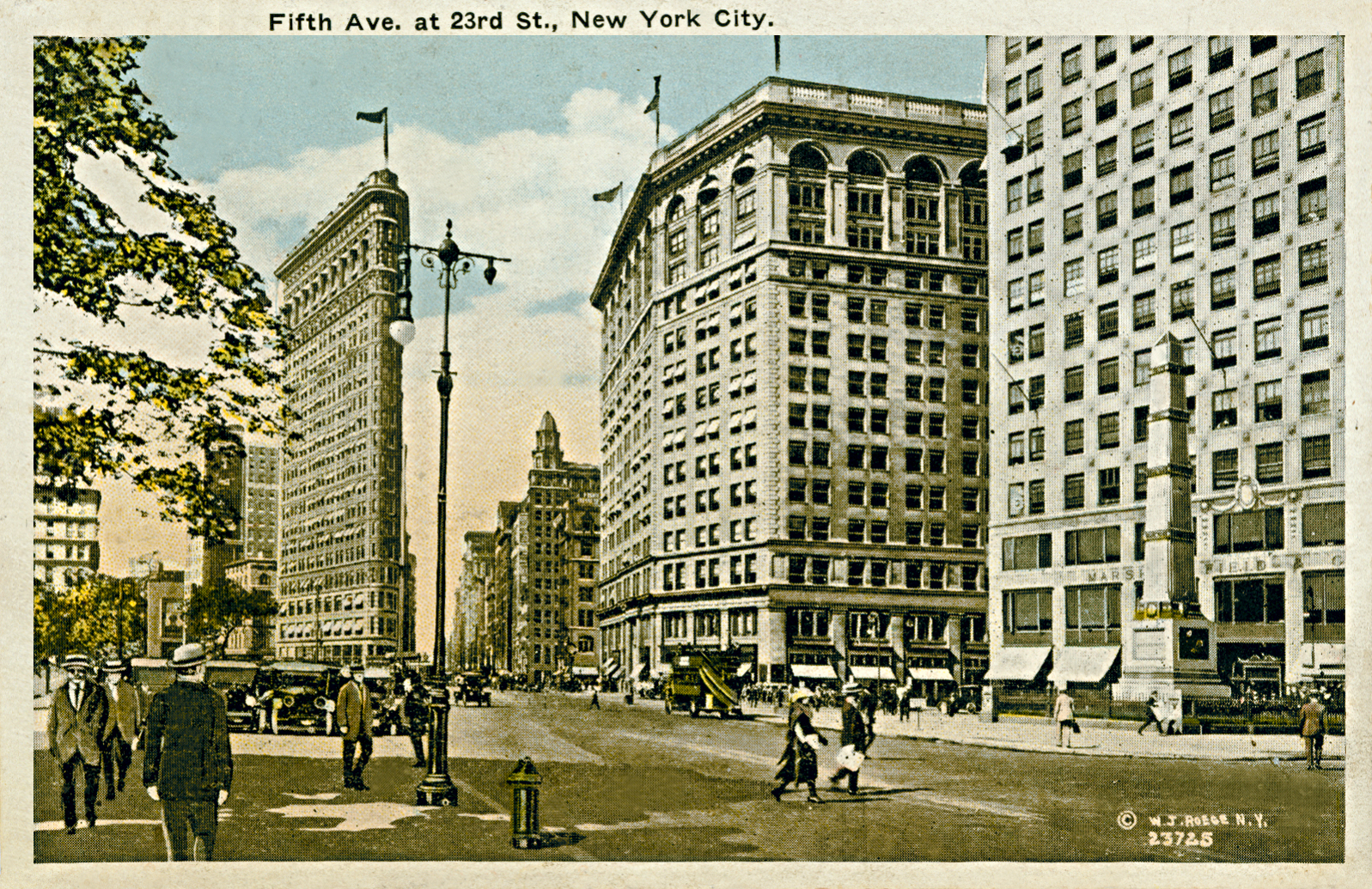 In 1908, the hotel plot became the Fifth Avenue Building, where it has stood for the past 112 years and is now known as 200 Fifth. When the Fifth Avenue Building first opened, its offices and showrooms quickly filled with a diverse array of businesses. By the 1960s, however, the owners began renting exclusively to toy companies. The building then became known as the International Toy Center. The Toy Center grew so quickly it expanded its footprint to include an adjacent building, linked by a street-bridge high above West 24th Street. Toy buyers from all over the world would visit the Center to both view and purchase innovative toy products.

The two buildings later separated, and the Toy Fairs moved on to be hosted at the Javits Center. 200 Fifth continued its fame by becoming home to several prestigious companies — the world headquarters of Grey Advertising, the business offices of Tiffany’s, Eataly‘s first marketplace location, Marimekko, and, as a nod to the toy industry, Lego‘s flagship store.

The Flatiron Building housed equally eclectic tenants including some toy companies and a number of publishing companies. Some 118 years later, Macmillan Publishing bid farewell after being the Flatiron Building’s longest tenants. Currently, the landmarked skyscraper is undergoing an extensive interior renovation and it’s next tenant remains unknown.

Somehow it seemed like the uniquely shaped parcel often referred to as “a stingy piece of pie” was destined for greatness. Before the Flatiron Building’s construction, the Flatiron plot was occupied by a series of low buildings. An 1880’s image featured in a Harper’s Magazine showed a horizontal banner that was installed on the plot’s lowest building. The banner read, “The Center of the United States — Here.” An appropriate message for its time and one that continues to capture the essence of the area’s appeal.