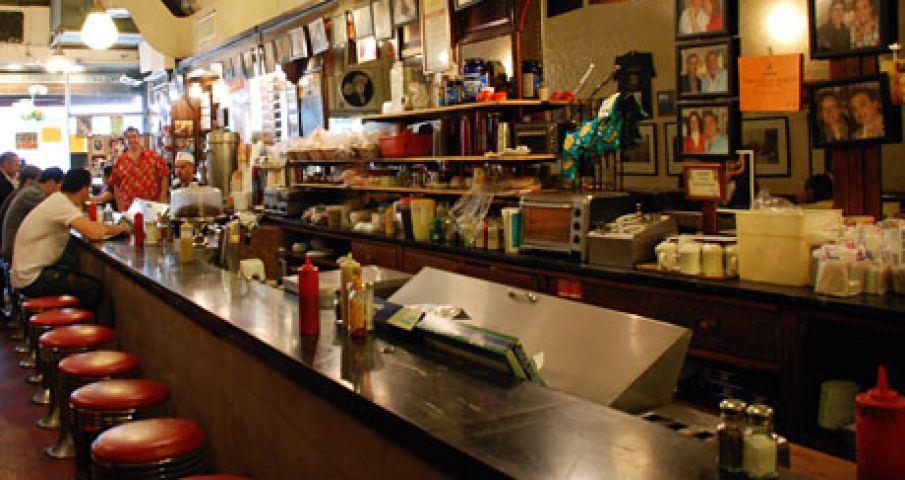 Lois Eida, who owns Lois Lane Travel said she discovered the secret of survival in New York when she started eating at Eisenberg’s Sandwich Shop more than 30 years ago.

“When I moved to Manhattan, some friends gave me very sage advice,” she recalled. “They said the way to endure in a big city is to turn it into a small town. Eisenberg’s does that for me. Everyone there knows my name. I used to go in every day when my business was next door. Now I’m four blocks away and I still go two or three times a week. I love the breakfasts — there are no better eggs in Manhattan. They’re cooked in a frying pan, not on the griddle. And lunch time means the best tuna in town.”

“We’re just a fraternity of fellow eaters here,” said Josh Konecky, the super-size fellow with the curly ponytail and the colorful shirts who can usually be found next to the cash register just inside the entrance. Konecky, 6-feet-6 and magisterial, is only the fourth owner since founder Monus Eisenberg emerged from the fur industry 80 years ago with his son Elias and opened a sandwich shop because the Depression was looming and this was one way to feed the family.

The stock market tanked in 1929 but Eisenberg’s did not. It became one of the longest-running shows in town, dishing out its tuna fish and meatloaf and egg salad without interruption at its one and only location: 174 Fifth Avenue, between 22nd and 23rd Streets.

Eventually, Monus’s other children — Barnett and Sylvia — went into the business. In 1979, half a century after they fried their first eggs, the Eisenbergs sold the shop. It changed hands again about 20 years ago and in September 2005, Konecky took over.

A veteran of the printing business, Konecky had been an Eisenberg’s regular for 15 years before buying the place. He is totally local, born 54 years ago and raised in Peter Cooper Village. Now he lives in Stuyvesant Town.

Change does not come easily to Eisenberg’s. Konecky decorated it with Manhattan street and subway signs and hung photos of show business personalities (“some of whom you might actually recognize”) and a back room was added about four years ago, raising the seating capacity to 62, but the menu has been essentially the same. Oddly, the shop never had burgers until Konecky came along (“it seemed natural to have an Eisen-burger on the menu”), but when he tried wraps, they fell flatter than an abandoned glass of seltzer.

The original marble counter is the heart of Eisenberg’s. It accommodates 24 narrowly spaced stools where wheelers and dealers in business attire sit cheek to cheek with students, retirees and neighborhood residents and everyone shmoozes, an activity as important at Eisenberg’s as eating. A section of the counter is known as The Hawaiian Room, memorialized in a small, neatly lettered sign marking its location. It’s where a counterman named Phil Perry, who came from Hawaii, fed and sometimes frightened customers for 33 years.

“Oh, he was a character,” said Konecky. “A guy might order bacon and eggs and Phil would just stare at him and not say a word. Finally, the guy would say, ‘Wha’?’ and Phil would say, ‘What am I, a #@&!! mind-reader? How do you want your $%!#@ eggs?’ He was a real New York counterman, cantankerous and tough. And people loved him.”

“Phil was there for me for almost 30 years,” she said. “He served me with TLC. He knew my order before I did. He was like family.”

Like family. Two words that, to many people, sum up the Eisenberg’s experience.