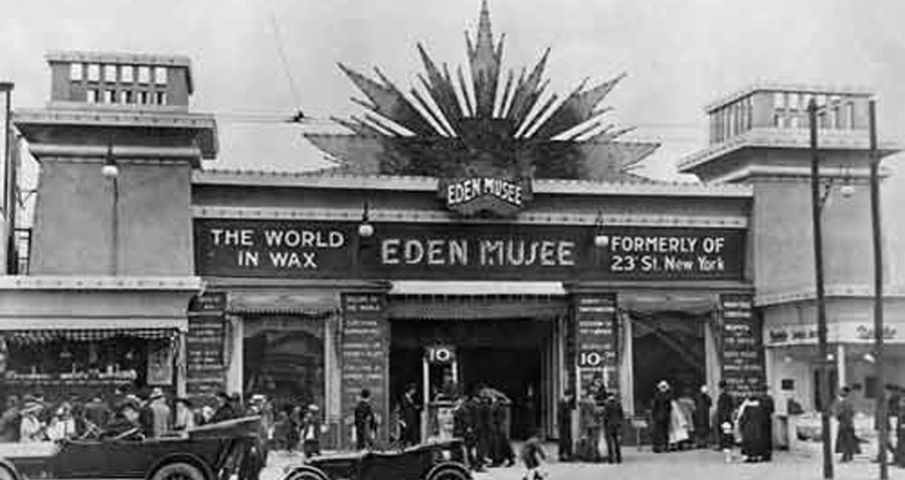 It was in the spring of 1884, when the area around Madison Square was the social epicenter of New York, that the Eden Musée made its debut at 55 West 23rd Street, just down the block from the elegant Fifth Avenue Hotel. That was 125 years ago, but it was an opening night not unlike today’s premieres. Some 2,000 New Yorkers, including the city’s social, cultural and political elite, flocked to the Eden “by special invitation,” eager to see what its promoters called “a Temple of Art without a rival in this country.”

Inspired by the spectacular success of Madame Tussaud’s in London, the Eden offered an astonishing collection of wax works, described on opening night by The New York Times as “strikingly realistic in colors and attitudes.” There was, for example, a tableau representing world rulers such as Queen Victoria, Pope Leo XIII and Prime Minister Léon Gambetta of France. In side alcoves, Napoleon III lay in state and Washington crossed the Delaware. Light refreshments were served in a music room, a reflection of the proprietors’ desire to make the Eden comfortable for women and children.

For those interested in more lurid presentations, a crypt beneath the ground floor served as a Chamber of Horrors. On opening night, reported The Times, a group of tableaus depicted “different methods of executing offenders.”

Although the Eden was primarily known as a house of wax, it also housed a myriad, and sometimes bizarre, collection of other attractions. To be sure, there were any number of conventional and uplifting events such as concerts and ballets. There were exhibits of orchids and butterflies and even rare postage stamps, and in 1887, an art gallery was added.

But there were other, odder lures. For the 50-cent entry fee, one could be entertained and educated by the likes of Professor J. Hartl and his nine Viennese lady fencers . . . Chief Sitting Bull and some of his braves, who showed visitors what life was like on the Great Plains . . . six-year-old Walter Leon, who discoursed on subjects such as “Is Marriage a Failure?” . . . and all manner of magicians, fantasists, illusionists and mentalists, including a 16-year-old Joseph Dunninger, who would go on to become known as “the mastermind of mental mystery” and perform before six U.S. presidents.

One of the longest-running attractions at the Eden was Ajeeb, a 10-foot figure with a wax head wrapped in a turban that would play checkers or chess and invariably defeat all comers, each of whom coughed up a few coins for the privilege of competing. Ajeeb was billed as a “robot,” but beneath the robes and cape that swathed its papier-mâché body, a series of small men who were chess experts took turns manipulating Ajeeb’s arm and moving the appropriate pieces. According to a 1943 article in The New Yorker, Ajeeb’s challengers included the writer O. Henry, who lived nearby; the great actress Sarah Bernhardt; and Christy Mathewson, the Hall of Fame pitcher for the New York Giants. Ajeeb debuted in 1886 and remained in the Eden until it finally went bankrupt in 1915, a victim of a growing form of entertainment called movies. That was ironic because the Eden had been showing motion pictures as early as 1895, but its interest in film waned while its devotion to wax waxed. The building was razed in 1916.

Some contents of the Eden were sold at auction, but many of the wax works provided a touch of class at a new, more raffish location: Coney Island. There, amid the sideshows and carnival rides, a large sign over the entrance proudly proclaimed: “Eden Musée, formerly of 23rd St. New York.”