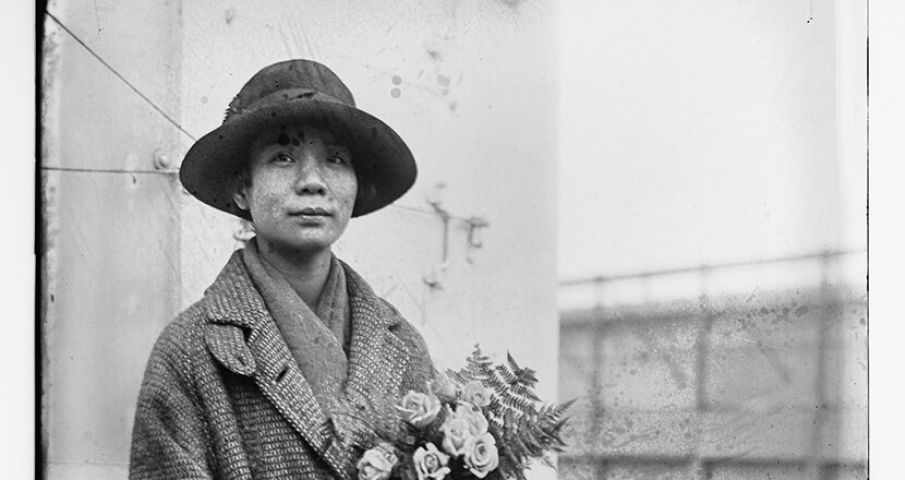 As we enter the last week of May to honor Asian American Pacific Islander Heritage Month, the Flatiron Partnership recalls the role of 16-year-old Guangzhou, China native Dr. Mabel Ping-Hua Lee at the women’s suffrage march from Washington Square Park to 27th Street and Fifth Avenue on May 4, 1912. Lee and others took part in a historic journey that would eventually lead to the ratification of the 19th Amendment, which granted some—but not all— women the right to vote in 1920.

Several years earlier, Mabel Ping-Hua Lee had arrived in America on an educational scholarship at the age of 9. Her family “immigrated under a slim exception” to the Chinese Exclusion Act of 1882, which prevented Chinese immigrants from becoming U.S. citizens, writes history.com. “Her father served as a Baptist missionary pastor in Chinatown, and both parents worked for the church as teachers.” In addition, notes the website, “They raised their daughter to be politically aware and modern, refusing to bind her feet as her mother’s had been—a stark reminder of how Chinese women had been traditionally held back for centuries.”

Academically, Lee excelled at Brooklyn’s Erasmus Hall High School and was accepted at Barnard. At this time “women in the U.S. battled for the right to vote,” reports barnard.edu, and “the Chinese Revolution of 1911 gave way to women’s enfranchisement in China.” According to Cathleen D. Cahill, author of Recasting the Vote: How Women of Color Transformed the Suffrage Movement. “white suffragists in New York invited Mabel Lee, her mother, and a couple of other women to meet with them and explain what was going on in China.” Before Lee’s matriculation at Barnard, where she would major in history and philosophy, she wrote articles about feminism and women’s right to vote before engaging in a history-making march.

Promptly at 5 o’clock on the early evening of May 4, 1912, “a brigade of women on horseback cast long shadows on the grass of Washington Square Park in Manhattan as they set off leading 10,000 people on one of the biggest marches for women’s suffrage that the nation had ever seen,” reported The New York Times on September 19, 2020. “Sharp whistles from the traffic policemen were followed by a muffled cheer from the spectators packed thick upon the sidewalk and banked high up the steps of all the houses,” according to the Times on May 5, 1912.

One of the women at the forefront of the honor guard leading the 10,000 marchers was Lee, who “directed her white horse around the east side of the park’s grand arch and up Fifth Avenue,” wrote The New York Times on September 19, 2020. “She wore a black three-cornered hat and a sash bearing the words ‘Votes for Women.’” Reportedly, Lee’s hat colors reflected the British suffrage movement: purple symbolizing that the cause of suffrage was noble; white for purity; and green, the color of spring, as a symbol of hope. And, noted the Times on May 5, 1912, “Dusty and weary, the marchers went to their homes…satisfied that their year of hard work in preparing for the demonstration had borne good fruit.” Within a decade, the first groups of women were able to vote in the United States.

“The idea of woman suffrage at first stood for something abnormal, strange and extraordinary, and so has finally become the word for anything ridiculous,” said Lee in the May 1914 issue of The Chinese Student Monthly. “The idea that women should ever wish to have or be anything more than their primitive mothers appears at first thought to be indeed tragic enough to be comic; but if we sit down and really think it over, throwing aside all sentimentalism, we find that it is nothing more than a wider application of our ideas of justice and equality. We all believe in the idea of democracy; woman suffrage or the feminist movement is the application of democracy to women.”

Lee continued with social activism and completed her studies at Barnard in 1916. She then earned a Master of Arts degree in Educational Administration from Teachers College at Columbia University in 1919, and a Doctorate in Economics from the university in 1921. Lee is purportedly the first Chinese woman in the United States to receive a Ph.D. She later became director of her father’s church and launched the Chinese Christian Center. According to baruch.cuny.edu, “Lee fought for many years to gain independence from the White religious leaders who wished to control her church, but she also encountered significant difficulties in a changing postwar Chinatown. Her congregation had shrunken significantly by the time she died in 1966.” And reportedly, it’s not known whether Dr. Lee ever became a citizen or voter in the United States.