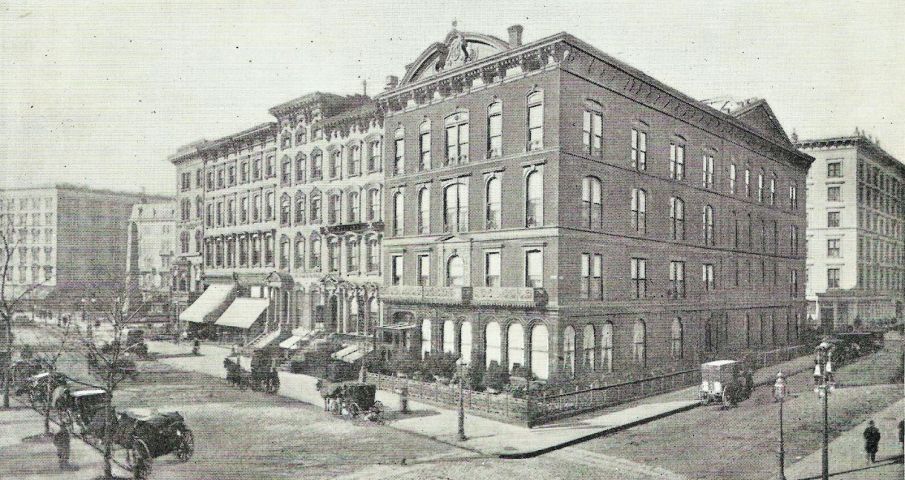 In anticipation of the semiannual Restaurant Week promotion, the Flatiron/23rd Street Partnership takes a look at the former site of the legendary Delmonico’s. In 1837, the Swiss-born owners opened in the country’s first restaurant in Lower Manhattan before débuting a subsequent Greenwich Village location in 1862 and then, in 1876, relocating to this neighborhood. September 2016 marks the 140th anniversary of the opening of the 26th Street location.

Delmonico’s is known for its classic chef creations such as Eggs Benedict, Baked Alaska, and Lobster Newburg, and now-common “inventions” that included printed menus and private dining rooms for patrons. “No noblemen of England–no Marquis of the ancienne noblesse–was ever better served or waited on in greater style than you will be in the private room at Delmonico’s,” reported The New York Times on January 1, 1859 about the Lower Manhattan location. “The lights will be brilliant, the waiters will be curled and perfumed and gloved, the dishes will be strictly en régle and the wines will come with the precision of clock-work that has been duly wound up.”

By the mid-19th century, the area around Madison Square was flourishing as New York City’s residential and social hub for the wealthy and high-profile visitors who stayed at the neighborhood’s luxury hotels. Many were also Delmonico’s devotees. The restaurant decided to leave their Greenwich Village venue at 14th Street and Fifth Avenue and reopen at 26th Street between Broadway and Fifth Avenue in the heart of what is now the Flatiron District.

The new restaurant would occupy a five-story brick building, which had previously housed a dance studio. Neighborhood-native and future U.S. President Theodore Roosevelt once took lessons there as a boy, wrote William Grimes in Appetite City: A Culinary History of New York. “A renovation… reestablished the note of elegance,” explained Grimes, “and without missing a beat, the Delmonicos were open for business yet again.”

Prolific architect Griffith Thomas, co-creator of the 1859 Fifth Avenue Hotel between 23rd and 24th Streets, was in charge of Delmonico’s redesign. An end lot on the narrow block accommodated a blueprint showcasing 155 feet of frontage on 26th Street, 56 feet on Fifth Avenue, and 60 feet on Broadway. “The first, second, and third floors will be given up to gastronomic uses,” stated The American Architect and Building News on March 25, 1876. In addition, the proposed construction plans featured a 36 x 70-foot street café, 33 x 60-foot restaurant, and several dining halls, the largest of which measured 25 x 57 feet.

“This Delmonico’s was the grandest of all,” noted Robert P. Marzec in The Mid-Atlantic Region: The Greenwood Encyclopedia of American Regional Cultures. The lavish location not only occupied the entire south side of the street, but offered extraordinary views. “The windows overlooked a lawn,” said Marzec, “that served as a foreground for the trees and flower beds of Madison Square.”

And the property’s interior décor was equally impressive. “On the first floor of the restaurant, silver chandeliers hung from a frescoed ceiling, mirrors lined each wall, and the furniture was all mahogany” remarked Marzec. “The second floor housed a ballroom, decorated in red and gold, and four private dining rooms, each decorated in a different color of satin. More dining rooms and a banquet hall, each decorated in different colors and styles, were on the third floor, and living quarters for a few single men and restaurant employees, as well as storage rooms and laundry, could be found on the top two floors.”

When Delmonico’s made its debut alongside Madison Square on September 11, 1876, “For a while, the outlook was foreboding: the morning patronage was thin, and there were empty tables at luncheon,” according to Lately Thomas in Delmonico’s: A Century of Splendor. “But with the cocktail hour, patrons began to crowd in, until both restaurant and cafe were filled, and the verdict was–a complete success.”

Delmonico’s would also be the site of numerous elite events, including cotillions where “many of the belles of the ‘Four Hundred’ have made their débuts,” wrote Moses King about the area’s young socialites in King’s Handbook of New York City: An Outline History and Description of the American Metropolis. “The place is the social centre of the wealthy and exclusive portion of New York.”

By the end of the 19th century, New York City’s cultural destinations were continuing their relentless march northward towards what is now considered “Midtown.” And once again, Delmonico’s took a cue from its customers. The self-described “first fine dining restaurant in the country” closed the doors of its much-celebrated Madison Square location in 1899, outpaced by its newer, two-year-old cousin at 44th Street and Fifth Avenue.

Image via The Illustrated American.