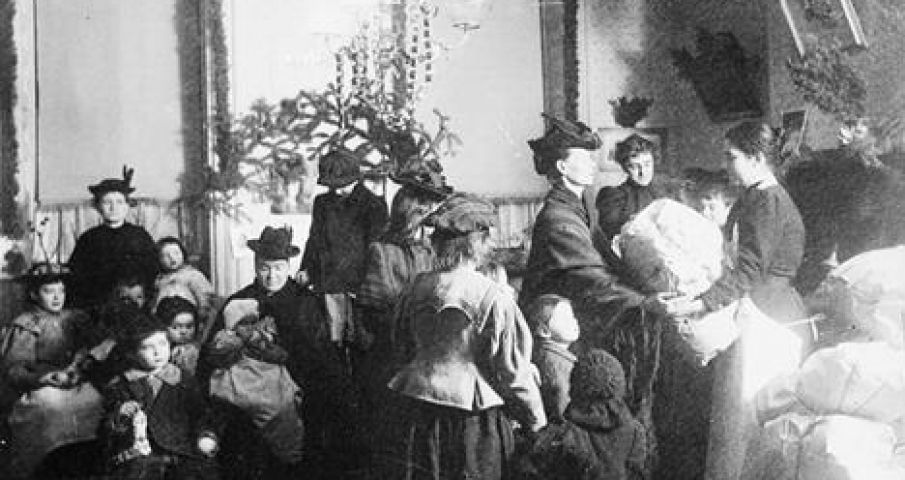 When Madison Square Garden’s second redesign of the 26th Street and Madison Avenue site opened for business in 1890, the new indoor arena set out to keep its status as a first-class event space. One way the venue attained this goal was serving as the location for a charitable holiday party that would distribute thousands of gifts and goody bags to New York City’s neediest children. This month, the Flatiron Partnership recalls the philanthropic efforts of the innovative Christmas Society and their Garden gathering held on Christmas Day 1891.

“To make the day memorable for the unfortunate little ones, to bring smiles to prematurely old faces, and to fill the old-young hearts with wonder and delight, are the self-imposed tasks of the newly-organized Christmas Society,” wrote The New York Times on December 3, 1891about the group’s pledge to aid others. The Society, reported The Sun on December 22, 1891, would also “afford an opportunity for the children of the rich to exercise the divine virtue of benevolence.”

During this era of excess, known as the Gilded Age, “industrialists lived high on the hog, but most of the working class lived below poverty level,” noted the website History.com. “While the wealthy lived in opulent homes, dined on succulent food, and showered their children with gifts, the poor were crammed into filthy tenement apartments, struggled to put a loaf of bread on the table, and accompanied their children to a sweatshop where they faced a 12-hour workday.”

For Syracuse native Oliver Sumner Teall, a Yale graduate and Albany Law alum who was now in New York City’s elite political and social circles, his concern for the lives of impoverished children during the year-end holiday season led to the creation of the Christmas Society. Teall served as President. Lispenard Stewart, once a New York State Senator, held the title of Treasurer. And, Herbert Livingston Satterlee, who later became Assistant Secretary of the Navy under U.S. President and Flatiron native Theodore Roosevelt, was named Society Secretary.

“The children of the rich are given toys and presents at all times of the year, and receive many more at Christmas,” proclaimed Teall about the vast evidence of economic inequality among the classes in New York City. “It is the object of the Society to afford them an opportunity to give from their abundance to the children of the poor; for though churches and charitable institutions provide for many, there are thousands entirely neglected at Christmas.” 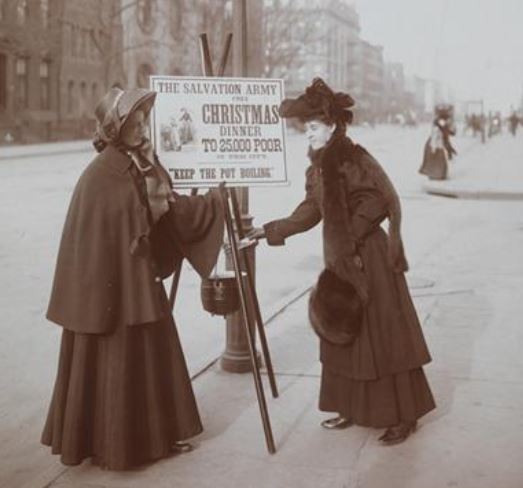 Teall’s team soon made an appeal for holiday gifts for the underprivileged children. Prosperous patrons who reportedly made donations included members of the Carnegie family, whose wealth had been derived from steel manufacturing and the Vanderbilts of shipping and railroad fame. Madison Square Garden, located in the affluent Madison Square area and the residential community for many of the city’s wealthy, was selected by the Christmas Society as the site for their holiday party. Event ticket prices ranged from $1 for gallery seats to $20 box seats.

The efforts by Teall proved to be a philanthropic success when he revealed that “the Christmas Society has received in gifts, and donations of money with which to buy gifts, enough presents for 18,273 children and has found the children who need the presents.” By the time the Garden’s doors officially opened to the public on Christmas Day 1891 at 1:30 p.m., the line for children, along with their parents or guardians, had extended around the block.

For possible crowd control, 200 police officers were dispatched to the Garden, but little was needed for the nearly 10,000 adults and children from diverse ethnic backgrounds who came to the arena. “So many of those who tried to enter, however, had no tickets, that it was decided to admit all until the Garden was filled,” reported The New York Times on December 26, 1891.

Once inside, attendees marveled at the attractions. “Stretching from floor to roof were a hundred ropes, intermingled with streamers of red, white, and blue, which were burdened with the toys that had been sent into the Christmas Society,” wrote The Times. “Everything in the line of a plaything was on those ropes, from a $75 hobby horse to a penny doll. Down through the center of the Garden ran a platform, which was heaped high with presents.” Some 12,000 toys, more than 10,000 bags of candy, and as many bags of fruit were given to those in need.

Teall’s Christmas Society, however, would last for only two seasons. The group faced mounting resentment by “established charitable agencies, who saw it as drawing attention (and contributions) away from their own work,” according to Stephen Nissenbaum in his book The Battle for Christmas. The Society had also accumulated a financial deficit that surged from $748.39 in 1891 to $3,144.02 one year later, with Teall personally assuming the debt. And, just days before Christmas 1898, published reports disclosed that Teall was being sued for divorce.

By 1906, Teall had an estate valued at a mere $125 when he died of heart disease on June 7th at the age of 54. His legacy of generosity, however, apparently left an ever-lasting impact on the lives of many that Christmas Day 128 years ago. “Perhaps some or many youngsters received more than their share,” reported The New York Times on December 26, 1891 about the Society’s Garden party, “but nobody who assisted in the distribution was unhappy for having done so. For all of these saw smiles light up hundreds of pinched little faces as the result of their labors.”