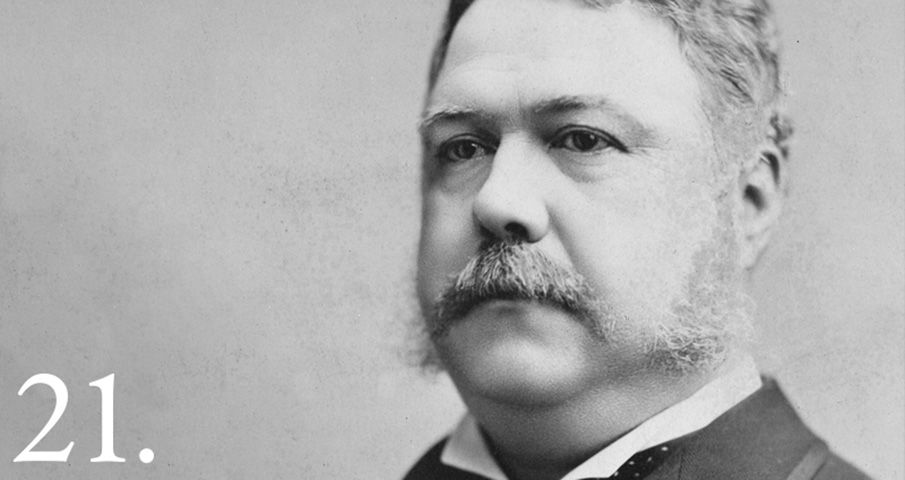 In honor of President’s Day on February 20th, the Flatiron/23rd Street Partnership takes a look back at the life of area resident, and 21st President of the United States, Chester Alan Arthur. President Arthur lived in a rowhouse at 123 Lexington Avenue, near 28th Street. It was here that Arthur was administered the oath of office on the morning of September 20, 1881, following the assassination of President James A. Garfield. It was the first time anyone had taken the oath of office in New York City since George Washington in 1789.

In 1880, Arthur had been elected as candidate Garfield’s Vice Presidential running mate. Described as a man who looked presidential and also held elegant dinner parties, Arthur was in contrast to Garfield. The Vice President was viewed as dignified, a tall and handsome individual with a clean-shaven chin and side-whiskers, wrote The Presidents of the United States of America authors Frank Freidel and Hugh Sidey. “He became a man of fashion in his garb and associates, and often was seen with the elite of Washington, New York, and Newport.”

Such stylist surroundings were a far cry from Arthur’s humble log cabin beginnings in Fairfield, Vermont. Born to Malvina, a homemaker, and William Arthur, a Baptist preacher and Irish émigré, on October 5, 1829, the future President recalled his youth idyllic, with time spent with his siblings, in Ruth Tenzer Feldman’s biography Chester A. Arthur, “What a life we did lead…sitting up like owls til two or three in the morning…quite satisfied with our little world.”

Arthur graduated from Union College in 1848 in Schenectady and practiced law and later was a principal at a Vermont academy. He then served as New York State’s Quartermaster General and Collector of the Port of New York, where he supervised thousands of Custom House employees.

In his personal life, Arthur and Ellen Lewis Herndon married in 1859. They had three children, a daughter, Nell, and two sons, William and Chester II. Following the untimely death of Ellen Lewis at the age of 42 in 1880, Arthur spent many of his days in mourning, and rarely left the house at 123 Lexington.

That changed once Arthur entered the Presidential office the following year. His legislative work included the enactment of the first general Federal immigration law, according to Frank Friedel and Hugh Sidey in The Presidents of the United States of America. The authors noted that Arthur was also a champion of civil service reform and created a classified system that made certain governmental employment obtainable only through competitive exams.

In the end, Arthur’s presidency would prove to be one term. Arthur left politics in 1885 and returned to private law practice and his beloved Flatiron area home. Kidney disease claimed Arthur’s life in 1886 and he was laid to rest near his wife in Menands, New York, approximately 20 miles from his alma mater.

Arthur is honored with a 15-foot bronze and Barre granite statue in Madison Square Park. According to the New York City Department of Parks & Recreation website, the $25,000 statue was commissioned by friends of Arthur and today stands at the northeast entrance of the park at East 26th Street.

The sculpture depicts Arthur standing in a frock coat before an armchair, draped with a rug, and embossed on the back with the presidential seal. “No man ever entered the Presidency so profoundly and widely distrusted,” wrote then noted newspaper editor and publisher Alexander L. McClure, “and no one ever retired…more generally respected.”