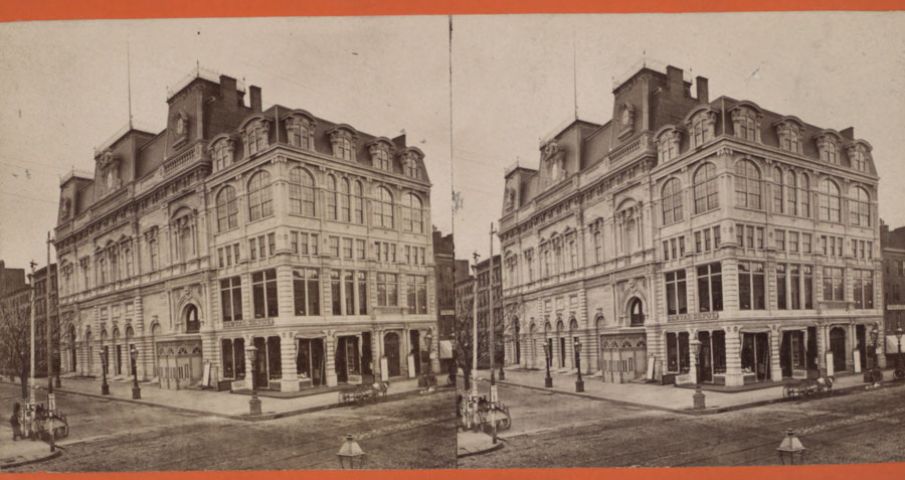 From his perch 20 feet above the sidewalk at the corner of Sixth Avenue and 23rd Street, William Shakespeare stares impassively at the multitudes below. The Bard is unnoticed by all but a few, but once upon a time, this corner was his turf. His bust is mounted on the Sixth Avenue façade of the Caroline, an apartment building that now occupies the site of Booth’s Theatre, once the most important venue in New York City for the production of Shakespeare’s plays and, for a time, the best-known playhouse in the Flatiron district.

That time was the late 1800s, when West 23rd Street was the heart of Manhattan’s thriving theatre and entertainment district, and Booth’s, which opened on February 3, 1869, with a production of “Romeo and Juliet,” was hailed by The New York Times as “the pride of the City, the resort of the educated, a school of art, a refined recreation and a benign contrast to the perverted amusements which have too long degraded the public taste.”

Booth’s was just one of many choices in the Flatiron’s culture cluster. There was the Madison Square Theatre, at 24th Street and Fifth Avenue with its drop curtain from Tiffany’s and a ventilation system that blew air over cakes of ice, making it the world’s first air-conditioned theatre. The New Fifth Avenue Theatre at 28th and Broadway was noted for its productions of Gilbert and Sullivan operas. Vaudeville and a beer garden characterized Koster & Bial’s mini-empire on Sixth Avenue between 23rd and 24th Streets. One of the Koster & Bial buildings, an 1886 red-brick structure, remains at the corner of Sixth and 24th, the names of the theatrical producers still prominent on its pediment beneath the words “The Corner.”

In the late 1870s, on the east side of Madison Square Park, Gilmore’s Garden, the precursor to Madison Square Garden, was presenting summer concerts. A couple of blocks away, where the Met Life Building now stands, the Lyceum Theatre — under the personal supervision of Thomas Edison — became the first playhouse to be lighted entirely by electricity. And on 23rd, just steps away from Booth’s, where thespians waxed poetic over Shakespeare, was the Eden Musée, whose proprietors, influenced by London’s Madame Toussaud, were presenting the poetry of wax.

Largely because of the man who built it, it was Booth’s that seemed to attract the most public attention. Edwin Booth was matinee idol material, described by The Cambridge Guide to American Theatre as “the finest American tragedian of his time.” He was also the older brother of John Wilkes Booth, the assassin of Abraham Lincoln.

In 1863, two years before that tragic event, Edwin had become the manager and lessee of the Winter Garden Theatre on lower Broadway, shifting it from burlesque and musicals to classical drama. For the next few years, he staged Shakespeare there, but on a Saturday morning in March 1867, fire destroyed the Winter Garden. Booth, who lived at 16 Gramercy Park South — now the Players Club — set his sights on 23rd Street.

He built a theatre at the southeast corner of Sixth Avenue at an unprecedented cost of $1.5 million. It was designed by architect James Renwick Jr., whose works include St. Patrick’s Cathedral and the Smithsonian Institution, and it was considered the finest theatre in the land. Built of granite in an ornate Second Empire style, it incorporated a forced-air heating and cooling system, hydraulic ramps that raised vertically moving platforms to enhance scenery changes, and a device that allowed the house gaslights to be extinguished or lighted simultaneously during performances. It seated almost 1,800, with standing room for another 300, and boasted seven entrances on 23rd Street and another on Sixth Avenue.

Demand for the Booth’s opening-night was so intense, an auction was held and tickets were limited to four per customer. “Prices obtained for some of the boxes and orchestra chairs were remarkable and have seldom been equaled in this city,” reported The Times. The best box went for $125, while orchestra seats ranged from $3 to $25.50, and balcony chairs from $1 to $8.

Despite the hoopla and the quality of the productions, Booth was able to keep his theatre going for only five years. Poor management forced him into bankruptcy during the nationwide financial panic of 1874. Others took over until 1883, when the building was razed to make way for a McCreery’s department store that eventually became a parking lot and then the Caroline. Ironically, the Booth’s last production, like its first, was “Romeo and Juliet.” The star was the patriarch of another distinguished family of the American theatre. He was born Herbert Arthur Chamberlayne Blyth, but became better known as Maurice Barrymore.