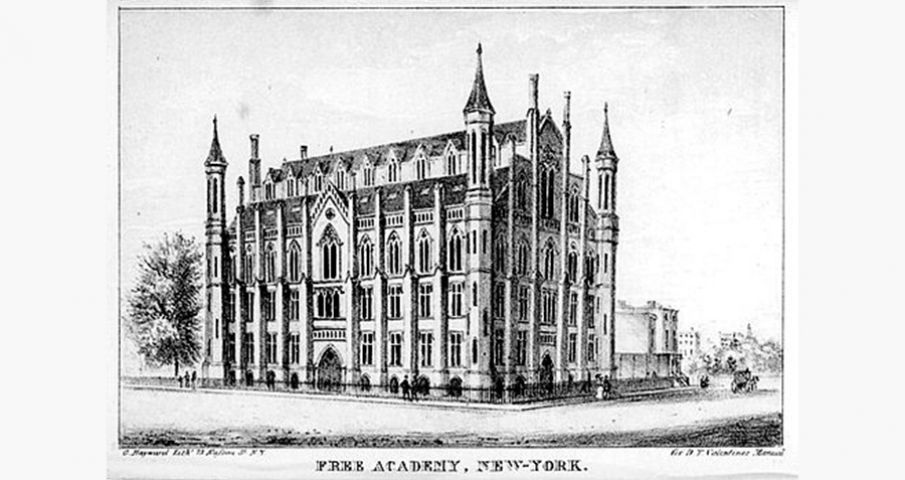 Three years after architect James Renwick Jr. designed Calvary Episcopal Church at Park Avenue South and 21st Street, he turned his attention to a new project just a short walk away. The year was 1849 and the new structure was at the southeast corner of Lexington Avenue and 23rd Street. It was called the Free Academy and its presence signaled a radical new concept in higher education: a tuition-free combination of prep school and college for any student who could pass the entrance exams.

“Open the doors to all,” said founder Townsend Harris, the Board of Education president who would later open Japan to trade with the U.S. “Let the children of the rich and the poor take their seats together and know of no distinction save that of industry, good conduct and intellect.”

Established by law in 1847, the Free Academy would later become known as City College of New York and its site would eventually hold what today is Baruch College. The Free Academy welcomed its first class on Jan. 15, 1849, when 143 students filed into the imposing new structure — one of the first Gothic Revival college buildings on the East Coast — five professors began lecturing and the great experiment got under way. In 1866, the Free Academy was renamed the College of the City of New York. In 1907, construction of the new CCNY campus at 138th Street and Convent Avenue was completed and the school moved uptown, although some classes continued in the original building.

In 1919, CCNY launched its School of Business and Civic Administration, the precursor to Baruch, and in 1927, the original Free Academy building was demolished. A year later, a cornerstone was laid on that site for a new 17-story structure (now known as the Lawrence and Eris Field Building) to house the business school. Even though it did not admit women until the 1930s, it was reputedly the biggest school of its kind in the nation. For the next several decades, it was known colloquially as “City College downtown” or “the business school.”

It became the Baruch School of Business and Public Administration in 1953, when it was renamed in honor of alumnus Bernard M. Baruch (class of 1889), a financier, statesman and advisor to Presidents Woodrow Wilson and Franklin Delano Roosevelt. In 1961, the City University of New York was established and seven years later, Baruch College achieved independence, becoming a senior college in the CUNY system.

Today, Baruch’s student body is acknowledged as the most diverse of any college in the country, coming from more than 120 nations. Stretching along Lexington Avenue from 22nd to 25th Streets, the school offers graduate and undergraduate programs and is ranked among the top 10 percent of U.S. colleges by the Princeton Review. In addition to the Field building, Baruch includes the Newman Vertical Campus, which opened in 2001 and whose location between 24th and 25th Streets is known as One Bernard Baruch Way, the college’s official address. Other Baruch structures are the Administration Center and the Steven L. Newman Hall on 22nd Street, and the Information Center and the Library and Conference Center on 25th Street.

The office of the current president, Dr. Kathleen M. Waldron, is in the Vertical Campus. So is a statue of Bernard M. Baruch, just inside the main entrance. He is shown relaxing on a park bench, a nod to his reputation for conferring with public officials while sitting on benches in Lafayette Park in Washington, D.C., and in New York’s Central Park. These days, he can often be seen sharing that bench with a student.