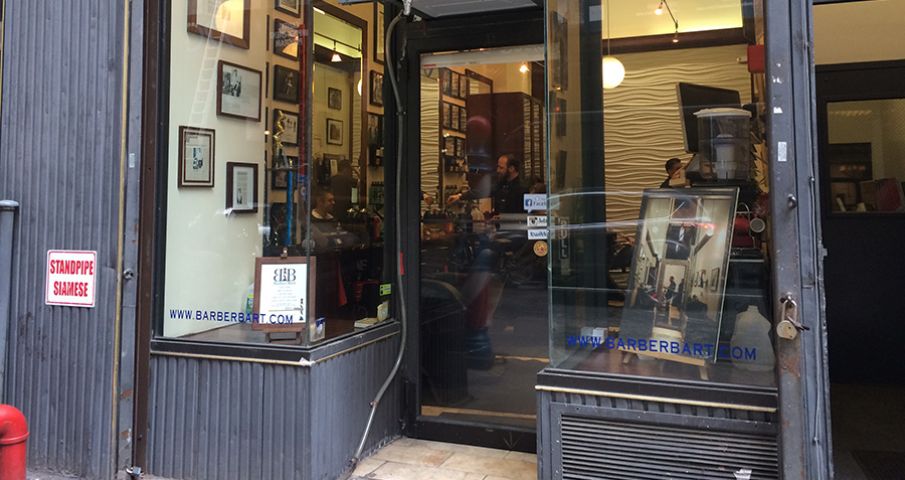 When Bartlomiej Trybala was a 15-year-old lad in Kraków, Poland’s second-largest city, he decided it was time to get serious about life. He had considered a career as a hockey player and had even been enrolled in a school that nurtured such athletes, but a disc injury two years earlier had crimped his style. To earn a real living, he’d have to do something else.

“My father said it was good to work with your own hands,” he recalled one recent evening. “He said I should learn to fix cars. I thought about it, but it wasn’t for me. Too dirty. I wanted a clean job. I looked at a directory of all the jobs people did and when I saw ‘barber,’ I said, ‘That’s for me. Barber. You have contact with people. It’s indoors, nice and warm. And it’s clean.”

That was almost 20 years ago, and now — a lot of jobs and a lot of cities and a lot of miles later — Barber Bart, as he’s known by almost everyone, is firmly ensconced in his own Flatiron shop, a wooden barber pole that he says he picked up on eBay for $800 announcing his presence and his profession to all his neighbors. His customers sit in $8,000 Japanese-made chairs with built-in heating and massage elements, while classic jazz provides a sound track. When he’s with a customer, he won’t take phone calls. Appointments are made online and listed on a computerized, wall-mounted, flat-screen monitor. Don’t call him a stylist. As his website says, Barber Bart offers “classic service with a modern touch.”

The “classic service” — haircuts, hot towels, shampoos and shaves with straight razors — had its beginnings back home, where Bart learned his trade apprenticing in a Kraków shop.

“For the first year, you just watch the boss, you sweep up the hair, and you practice, practice, practice,” he said. “You learn how to give a shampoo, how to massage the head, and you practice shaving balloons. I popped a lot of balloons. When they pop, it’s messy. The shaving foam flies everywhere. The good part is the balloons don’t bleed.” By the time he was 18, Bart was snipping hair and shaving faces, but then his father died and he was forced to be the sole support of his mother and younger sister, then just a baby. It was the start of a journey that first took him from Poland to a job at a dairy farm in Germany and then to a wholesale “flower factory” near London, where he lived in a barn (“like horses”), all the while sending money home and making the occasional trip back to Kraków to check on his family. On a second trip to London, he resumed barbering.

“I had three jobs,” he said. “I worked in two different barber shops during the day and delivered pizza at night.”

In 2000, he came to the United States, working as a barber near Chicago’s Lake Shore Drive, then arrived in New York in 2001. After a brief stint cutting hair in Forest Hills (“very slow”), he hit Manhattan, manning a chair at Chelsea Barbers for three and a half years before deciding it was time for his own place. He opened at 17 East 21st Street on November 14, 2004, bringing some of his Chelsea regulars with him.

“When I started, it was just me, but I had two chairs,” he said. “In five months, I hired a second barber. Within eight months, I added a third chair. Now I have five other barbers in the rotation, a shampoo girl and a bookkeeper.”

When he works, Bart slips into one of the black “BB” monogrammed shirts all his barbers wear and straps on a leather holster in which he carries a complement of combs and four scissors (“different kinds of scissors for different kinds of hair”). When he’s not working, he wears a different sort of uniform. Trim and sharp as one of his well-honed razors, he still finds time for ice hockey, strapping on the pads and lacing up the skates several times a week while competing in two divisions at Chelsea Piers. He goes back to Kraków several times a year to see his mother and sister — and to play hockey with the Cracovia team, an amateur sports club that was formed in 1906. Remarkably, he’s still an active member.