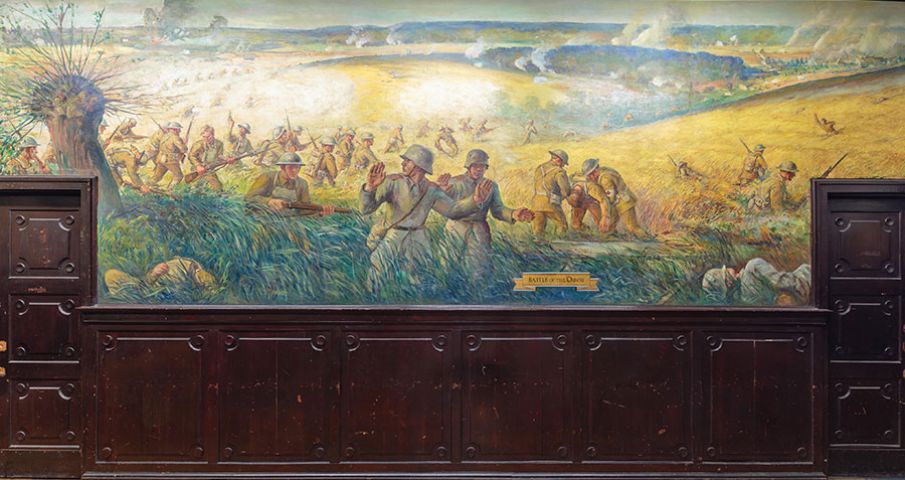 When artist Earl Lonsbury painted nearly 1,000 square feet of oil on canvas murals in 1936, the yearlong project was a labor of heroic love. The Bayonne, New Jersey native was commissioned to create a series of reenactments from the 69th Regiment’s most notable missions for their Lexington Avenue Armory headquarters, between 25th and 26th Streets, in the Flatiron District.

Lonsbury was employed by the Federal Art Project, a division of the Works Progress Administration, a relief agency established for Depression-era artists by President Franklin Roosevelt’s New Deal program. During this period, more than 118,000 paintings, sculptures, and murals were produced for public facilities such as libraries, post offices, and armories.

“A series of timeless, priceless murals,” notes Bert Cunningham, the Lexington Avenue Amory’s Regimental Historian and a former 69th Regiment officer, about the featured images in the 1906 Beaux Arts building. “Generations of Regiment members, veterans, families, and the public have viewed the early saga of America’s most famous military unit of Irish heritage.”

Initially formed in 1849, the 1st Battalion 69th Infantry was comprised of Irish immigrants. By 1851, the unit had become part of the New York State Militia and officially named the 69th Regiment. The soldiers soon gained recognition as “the heart of the historic Irish Brigade of the Union Army” during major Civil War battles, including Fredericksburg, Virginia, in 1862, and Gettysburg, Pennsylvania, in 1863. Confederate General Robert E. Lee reportedly dubbed the Regiment “The Fighting 69th,” and Hollywood subsequently used the name as the title for a 1940 James Cagney film based on the troop’s service during World War I.

Lonsbury’s role as Regiment storyteller appears on four basement walls in the Armory’s designated Mural Room. His portrait of Marye’s Heights on the East wall “depicts the Irish Brigade, including the 69th, led by General Thomas F. Meagher, making one of its six frantic dashes against withering Confederate musket and cannon fire from the sunken road and heights above the line at Fredericksburg on December 13, 1862,” describes Cunningham. “The Irish fought valiantly and lost many, but did not breech the defense. The Confederates hailed their fearlessness.”

The West wall features Battle of the Ourcq. “It was at this battle in France, in July 1918, in which [Trees poet and 69th Regiment enlistee] Joyce Kilmer was killed by a sniper while out scouting the battle area,” says Cunningham. “This was also the battle where Father Francis P. Duffy was actively out on the battlefield pulling in wounded soldiers to safety and for medical attention, which was in violation of Army regulations prohibiting chaplains from being at the battlefront. Father Duffy was always at the battlefront with the troops, which is one of the reasons he was so admired.”

The mural scenes on the South wall are The Wheatfield at Gettysburg in 1863, a New York welcome home parade in 1865, Camp Life in Tampa, Florida, during the 1898 Spanish-American War activation, and Over There, which is the largest of those panels, explains Cunningham. “It shows the infantry being transported in November 1917 to France on the S.S. America, once the luxury German passenger liner Amerika, which was impounded in a U.S. port at the outbreak of  World War I in 1914.”

The three panels on the North wall, Lexington, Valley Forge, and Yorktown, “capture the Militia’s role, later in history to become what is now the citizen soldiers of the National Guard, in the American Revolution,” reveals Cunningham, who also conducts the Armory’s appointment only tours. “All the murals are unique treasures and we need to have them preserved, restored, and kept in the best shape possible for future generations. I have a true love for the Regiment and its history and I enjoy sharing it with others.”