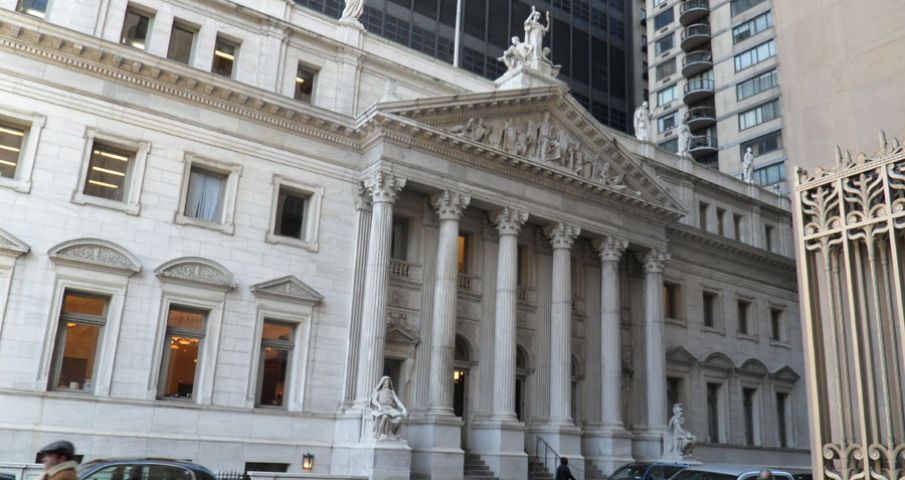 When the Appellate Division Courthouse opened its doors on Jan. 2, 1900, it was distinguished not only by its beauty, but its location. Most of Manhattan’s major courts are downtown, part of a cluster of government buildings near City Hall. This one — sitting in marbled magnificence on the corner of Madison Avenue and 25th Street, on the eastern edge of Madison Square Park — was built on a street of row houses that were part of a genteel residential neighborhood.

The court remains one of the busiest appellate courts in the country, hearing appeals from State Supreme Court, the Surrogate’s Court, and the Family Court in New York and Bronx Counties. It was designed by James Brown Lord, who was given a budget of $700,000, a huge sum for a building in those days. Lord, who hired some of the nation’s most accomplished artists to work on the project, brought it in on time and under budget.

The building is best known for its unique blending of art and architecture, a major principle of the Beaux Arts movement. The influence of Andrea Palladio, the 16th-century Italian architect, is evident in Lord’s use of columned porches and statues and the melding of a Roman temple front to a Renaissance palazzo body. There are some 30 figures by 16 sculptors, the most who ever worked on a single building in the United States. A ring of rooftop statues represents the great lawgivers of history, including Moses, Confucius and Justinian. A statue of Mohammed was at the western end of the 25th Street side but removed because Islam prohibits such human representation. The other statues were shifted one spot to the west, leaving an empty place at the eastern end.

On the inside, 10 artists created murals, depicting legal themes, for the main hall and courtroom. The main hall has an ornate coffered ceiling, a bronze and glass chandelier, Siena marble walls divided by Corinthian pilasters and massive, original, Herter Brothers furniture. The courtroom has a stained glass dome set into the gilded coffered ceiling. As in the main hall, there are spectacular marble walls, murals, and original furniture.

Court sessions are open to the public. Visitors are also welcome to see the lobby and courtroom when court is not in session, generally Tuesdays through Thursdays from 9:00AM to noon and Fridays after 2:00PM. The building closes at 5:00PM.

In 1990, a Memorial to the Victims of the Injustice of the Holocaust was unveiled on the Madison Avenue façade of the courthouse. Designed by Harriet Feigenbaum, it is a marble carving of the site plan of Auschwitz with the inscription “Indifference to Injustice Is the Gate to Hell.”

The courthouse exterior was designated a New York City Landmark in 1966, and the interior in 1981. The courthouse is also listed in the New York State and National Registers of Historic Places.

Images via Historical Society of the New York Courts and Nick Begley.