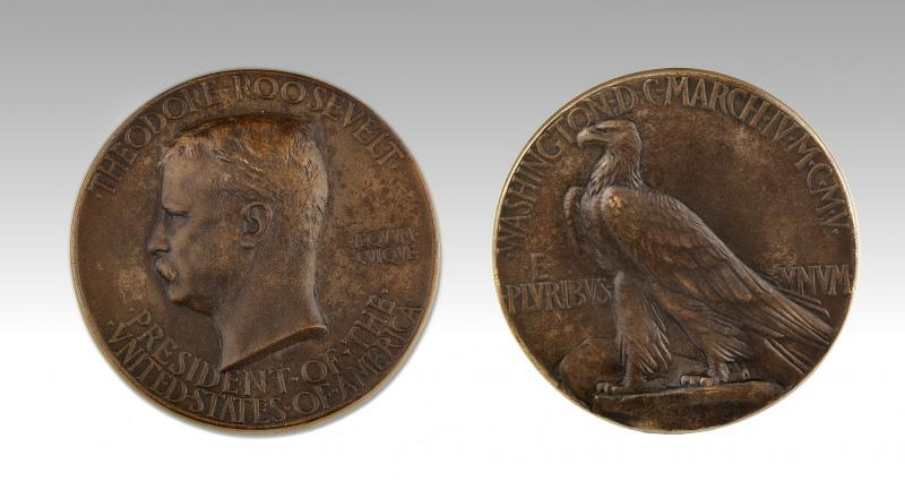 When Flatiron native Theodore Roosevelt became the 26th U.S. President in 1901, his White House agenda included a redesign of the nation’s coins. This month, the Flatiron Partnership returns to that occasion when President Roosevelt and renowned neighborhood sculptor Augustus Saint-Gaudens became artistic collaborators in rebranding the country’s currency.

At age 42, Theodore Roosevelt was the youngest and first-ever native New Yorker to serve as America’s Commander-in-Chief. As the second of four children born to a philanthropist and socialite in 1858, Roosevelt grew up with his parents and siblings in a palatial brownstone located at 28 East 20th Street in the area now known as Flatiron. Upon graduating from Harvard, he decided to pursue a number of public service posts, which included Governor of New York State, Police Commissioner for the City of New York, and as Vice President to President William McKinley. 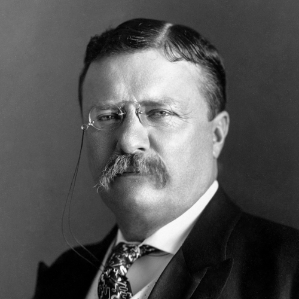 In 1848 and more than 3,000 miles away in Dublin, Ireland, sculptor Augustus Saint-Gaudens was born to a couple who were shoe shop employees. The family relocated to New York City when Saint-Gaudens was just a toddler. The aspiring sculptor’s “artistic talent was recognized while he was a child when he was apprenticed to a cameo cutter,” writes themagazineantiques.com. “Encouraged to study art, Augustus took evening classes at the Cooper Union and the National Academy of Design, which was conveniently located next door to his father’s shoe store.” His most notable Flatiron works are the 1881 David Glasgow Farragut statue in Madison Square Park, as well as the 1893 nude statute of Diana, Goddess of the Hunt atop Madison Square Garden then located at 26th Street. 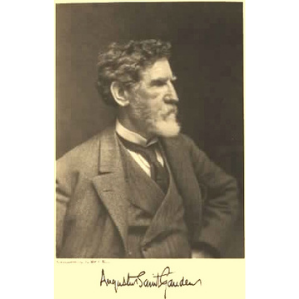 The initial launch of the business partnership between President Roosevelt and Saint-Gaudens took place during an architectural improvement project involving the nation’s capital. “The sculptor had come into the Roosevelt circle in 1901 as a member of a commission of famous artists and architects created to assist in restoring the city of Washington to the original plan of [architect Pierre Charles] L’Enfant,” wrote the publication American Quarterly in 1966. “An intimate friendship soon developed between the shy, retiring sculptor and the effervescent, demonstrative President.” According to the John H. Dryfhout book, The Work of Augustus Saint-Gaudens, “It was not long before his enthusiasm and that of the President were aroused by the possibility of redesigning the nation’s coinage.”

However, President Roosevelt’s first order of design for Saint-Gaudens would be the creation of a commemorative inaugural medal in honor of the President’s 1904 election win. “Saint-Gaudens accepted the commission and approached his friend Adolph Weinman to execute his design,” notes americanart.si.edu. “President Roosevelt, whose personal interests ranged from literature to natural history, held very specific ideas about art. To appeal to the President’s unpretentious taste, Saint-Gaudens designed a simple obverse featuring Roosevelt’s profile and the Latin phrase Aequum cuique, a translation of his campaign slogan, ​’a square deal for every man,’” which the Commander-in-Chief was reportedly “especially fond of.”

Then, in that same year, President Roosevelt wrote to Treasury Secretary Leslie Mortier Shaw with a request to consider redesigning the country’s coins. “I think our coinage is artistically of atrocious hideousness,” Roosevelt reportedly commented about his so-called “pet crime” project in a letter to Secretary Shaw. “Would it be possible, without asking the permission of the Congress, to employ a man like [Augustus] Saint-Gaudens to give us a coinage that would have some beauty?” Soon, Saint-Gaudens was assigned with the task of designing 10- and 20-dollar gold coins, as well as a one-cent coin, the latter of which was never issued for circulation by the U.S. Mint. He would also gain historic status as the first sculptor to create an American coin. 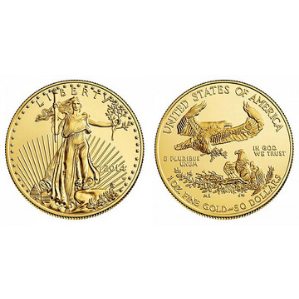 “Saint-Gaudens first began with simple quick drawings on whatever paper he had at hand,” notes nps.gov. “These small drawings were meant as visualizations of ideas only. The first real designs came in clay, in circular reliefs done about twelve- to thirteen-inch diameter. The sculptor works in clay because it is easily shaped. Once a design is fully adapted, it is cast in plaster. The final plaster designs were sent to the U.S. Mint, where they were used with the Janvier Lathe, a machine that can mechanically reduce the large sketch to the size of a coin.” 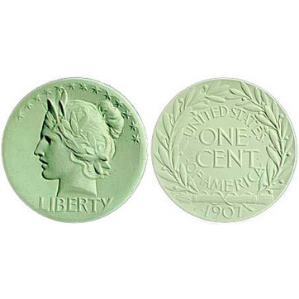 (Photo Credit: USA Coinbook of Proposed Design of the US One
Cent piece by Augustus Saint-Gaudens)

Issued in 1907, the 10-dollar coin “featured the head of Liberty wearing neither the traditional Phrygian cap representing freedom, nor the laurel wreath from Saint-Gaudens’s original design, but rather a Native American ceremonial headdress which TR suggested because he considered it to be more suitably American,” writes theodoreroosevelt.org. “On the back was the side view of a standing eagle closely resembling the eagle from the inaugural medal. The 20-dollar gold coin displayed a full, standing Liberty striding forward in a blaze of sunlight holding an olive branch and a lit torch. The obverse showed an eagle in flight.” Both men reportedly felt “simplicity lent dignity” and initially there was no inclusion of the slogan “In God We Trust,” but criticism from Congress and the general public led the U.S. Mint to reinstate the popular phrase. 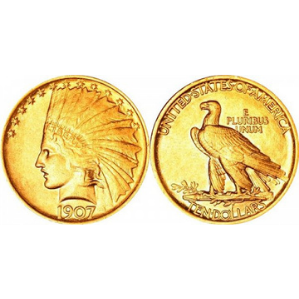 From the time Saint-Gaudens accepted the commission, however, he had been diagnosed with cancer, but made the decision to proceed with the project. Following Saint-Gaudens’ death on August 3, 1907, at the age of 59, Henry Hering, the sculptor’s studio assistant and fellow sculptor, stepped in to finish the rest of the assignment. The coins were placed in circulation to the public later that year, with President Roosevelt proclaiming they were “more beautiful than any coins since the days of the Greeks, and they achieve their striking beauty because Saint-Gaudens not only possessed a perfect mastery in the physical address of his craft, but also a daring and original imagination.” 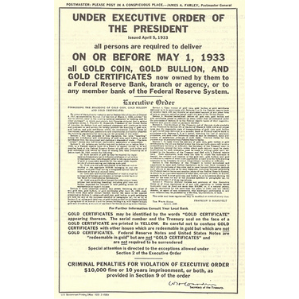 But on April 5, 1933, President Roosevelt’s fifth cousin and the 32nd President of the United States, Franklin D. Roosevelt, would sign Executive Order 6102, which prohibited the ownership of gold coins and bullion due to the era’s economic crisis. It read, in part, “I, Franklin D. Roosevelt, President of the United States of America…do hereby prohibit the hoarding of gold coin, gold bullion, and gold certificates within the continental United States by individuals, partnerships, associations, and corporations.” According to Forbes.com, “FDR’s gold confiscation meant private owners were obliged to take their coins, bars, or gold certificates to a bank, and exchange them for dollars at the prevailing rate of $20.67 per ounce. Over the next year, the President then raised his official gold price to $35 per ounce, effectively cutting 40% off the dollar in a bid to stoke inflation and spur the economy.” Reportedly, millions of coins were returned, but some individuals refused to comply with the presidential ruling, with a number of Augustus Saint-Gaudens gold coins that still can be found in “limited quantities” today.