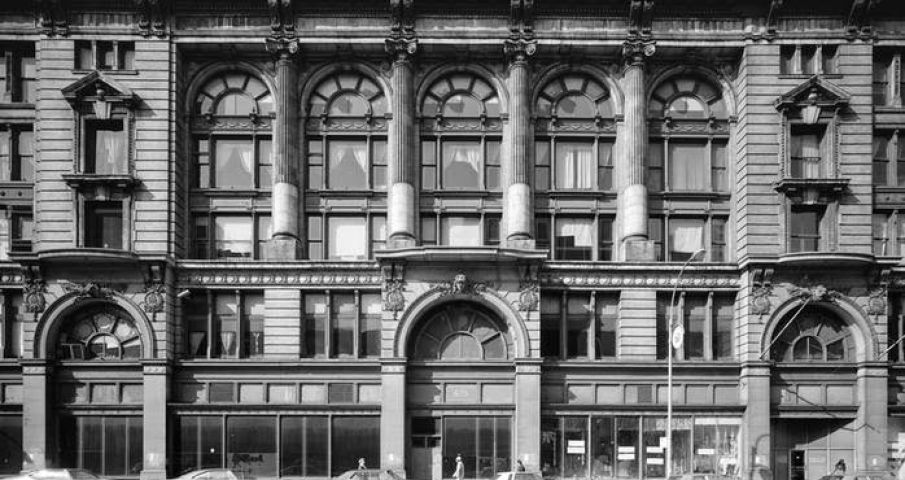 Back in the 19th Century, Samuel Adams went to Colorado to dig for silver. Then he came to the Flatiron District and found gold.

Adams, who was born in Canada in 1849, arrived in the United States as a young man and dabbled in the dry goods business in New York. He eventually settled in Colorado, where he headed a silver-mining concern and was later elected a state senator. Not long after, he returned to New York and in 1885 opened a small dry goods store at the southwest corner of Sixth Avenue and 22nd Street. Within a few years, his business ballooned and by 1899 he occupied all the buildings fronting on Sixth Avenue, down to 21st Street. Realizing that his thriving enterprise required a proper setting, Adams hired Theodore W. E. DeLomos and August Wilhelm Cordes, architects who specialized in large department stores, and in 1900 work began on what would become 675 Sixth Avenue.

That building, now 110 years old, became the home of Adams Dry Goods Co., part of the fleet of great department stores berthed on Sixth Avenue in an area made famous as the Ladies’ Mile. It is a magnificent six-story Beaux Arts structure of cast iron and masonry, with four giant limestone columns on its façade and a magnificent interior courtyard extending to a skylight at roof level. This summer, the building was in the news again, when Trader Joe’s supermarket filled 16,000 square feet of street-level space that had been vacant since Barnes & Noble departed two years ago.

In its heyday, Adams Dry Goods was quite the emporium, so elegant, say some, that it refused to allow price tags to mar its merchandise. It was one of the first buildings in New York with automatic elevators. Three great entrances on Sixth Avenue beckoned passersby, while giant display windows on the second and third floors were at eye level with trains rushing by on the old Sixth Avenue El, offering passengers a hint of the fine china and linens and splendid fashions that lay within.

The store made headlines in 1906, when in the late afternoon of May 29, one of the four giant water tanks on the roof suddenly burst, sending 10,000 gallons of water crashing through the skylight and into the store, along with chunks of wooden tanking planks two inches thick. More than 3,000 shoppers were inside, reported the next day’s New York Times, and Sam Adams was in his office, thinking an earthquake had just taken place. He personally took charge of the rescue work. Meanwhile, on 21st Street, some 5,000 onlookers had gathered. Some thought the building might collapse and tried to surge inside to help get people out. They had to be restrained by mounted police. When order was restored, 10 people had suffered serious injuries, but there were no fatalities. The store’s staff was credited with exemplary behavior in preventing panic.

Two months later, it was announced that Adams would merge with Hugh O’Neill’s department store, one block south, and that a tunnel would be built connecting the two buildings. The merged company lasted only a year. It closed in 1907, a victim of the influx of garment manufacturers into the side streets and the move of major retailers to locations farther uptown.

Since then, 675 Sixth Avenue has been home, at various times, to an Army storage facility; the Hershey Chocolate Company; the Young & Rubicam ad agency; Mattel Toys, which in the 1980s had three upper floors and used the street-level space to show Barbie and the Rockers and other children’s favorites during annual toy fairs; and Barnes & Noble, which leased the entire street level from 1994 to 2008. Fisher Price, a Mattel subsidiary, now has space on an upper floor as well as the basement level, and The Gap has offices on an upper floor.

Samuel Adams died in 1928 at the age of 79. By 1908, he had ended his stay on Sixth Avenue, following the trail of other leading merchants and heading north. He didn’t stop in midtown, though, but marched into the Bronx, where he launched Adams-Flanagan & Co. near 149th Street and Third Avenue. It was a major neighborhood department store, but not quite as tony as his Ladies’ Mile emporium. All the merchandise carried price tags.