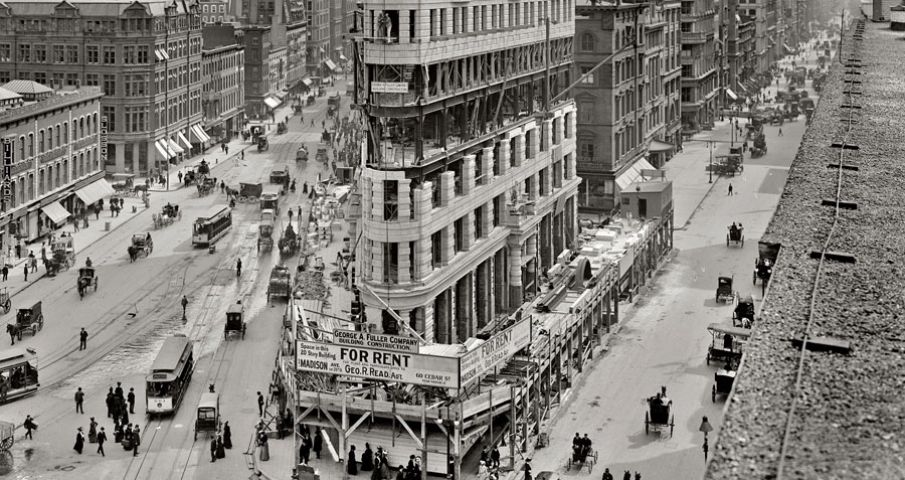 The expression “23 skidoo,” a slang way of referring to a hasty departure, usually at the behest of external factors, became popular early in the 1900s. On that, there is general agreement. The origins of the phrase, however, are murky.

For some word detectives, “23 skidoo” had its origins in California’s Death Valley at the start of the 20th century, when gold was discovered near a shabby little town called Skidoo. When the vein disappeared, so did Skidoo. Other lexicographers say that “23” was a telegrapher’s shorthand way of saying, “Begone!” while still others mention English racetracks, which reportedly limited entries in any event to 23 horses. When that number was reached, the horses got the signal to scamper.

The most popular theory, however, has its roots in the heart of the Flatiron district, at the intersection of Fifth Avenue, Broadway and – naturally – 23rd Street.

The relative positions of those streets, the adjacent expanse of Madison Square Park and the triangular shape of the Flatiron Building when it was completed in 1902 all had the effect of increasing the velocity of winds that came swirling through the neighborhood. Otherwise gentle breezes gathered strength and often wreaked havoc with the long dresses that were then fashionable, lifting skirts well above a lady’s shoetops. At a time when even “a glimpse of stocking was looked on as something shocking,” the possibility of a peek provided great sport for local idlers, wiseacres and even precocious young lads who should have been averting their eyes instead of whooping with glee when an ankle flashed into view. The police, or Roundsmen as they were then known, combined gallantry with crowd control and were said to disperse the Peeping Toms by giving them “the 23 skidoo.”

The “23” part of that theory is self-evident (23rd Street), while “skidoo” is likely a derivative of “skedaddle,” a verb implying a very quick departure, and the sooner the better. Skedaddle itself might be a dialect form of “scatter.” Ironically, the expression “23 skidoo” reached the pinnacle of its popularity during the Roaring Twenties, a period when women’s hemlines were higher, morals were lower and bare limbs were as common as lipstick-stained cigarette butts.