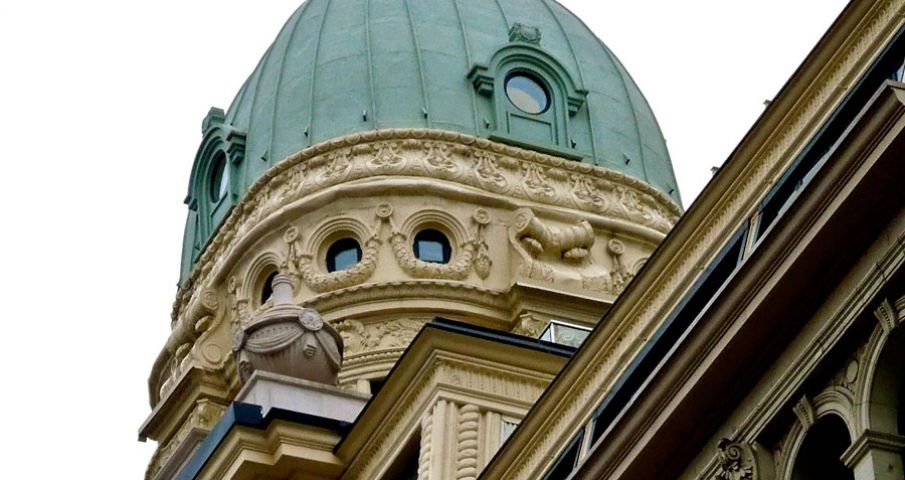 For a little over a year and a half, one of the oldest and loveliest buildings on lower Fifth Avenue has been wearing a mask. Sort of.

It’s 141 Fifth, at the southeast corner of 21st Street, and while it is being renovated into residential condominiums after more than a century as a commercial building, it has been sheathed in a printed fabric depicting what it will look like when the curtain is removed.

When it was completed in 1897, the building was topped by a magnificent copper cupola, almost a signature touch of its architect, Robert Maynicke. Maynicke’s fingerprints are all over the Flatiron district. Right after he worked on 141 Fifth, Maynicke designed the nearby Sohmer Building at 170 Fifth, also capped by a great dome. Several years later, his firm, Maynicke & Franke, created what was to be the International Toy Center at 200 Fifth Avenue.

The land on which 141 Fifth sits had been purchased in 1854 by Robert L. Cutting, a Manhattan banker who hobnobbed with folks like J. P. Morgan and Thomas Edison and whose funeral at Grace Church in 1887 was attended by the cream of New York society. Cutting had built a four-story brownstone mansion, with basement, at 141 Fifth Avenue, a showplace in its day. In 1896, nine years after his death, the property – together with an adjoining plot at 143 Fifth Avenue also occupied by a great house – was sold for $225,000. Both mansions were razed and groundbreaking commenced for a fireproof store and lofts structure that became known as the Merchant’s Bank of New York Building.

Some of the original tenants were Park & Tilford, the Zabar’s of its time, and the prestigious Art Lithographic Publishing Co. In addition to its 30-foot cupola, the landmarked building – part of the Ladies’ Mile Historic District – is graced by a Beaux Arts terra cotta façade, a rounded corner, white brick and banded columns. An arch beneath a large circular window frames the entrance. A fifth-floor balcony that had been removed in the 1950s has been restored.

The building was acquired late in 2005 by S.L. Green and Savanna Partners for a reported $60 million. Green owns the lower two floors, which will be retained for commercial use, while Savanna is developing the rest of the building into 38 condominiums, including four penthouses. One of them, a 3,200-square-foot triplex, will be contained within the cupola. Centra/Ruddy is handling the architecture and interior design and according to published accounts, the entire renovation is expected to be completed early next year.